Before I get into this post, I wanted to mention that four years ago today I started this blog. I really wasn’t sure what it would turn into or if I would even keep up with it. It has evolved a lot since my first post, and instead of just telling readers about my training; over 450 posts later, I now try to write posts that relate to all people, not just athletes. I appreciate all of my readers and I continue to be amazed at the amount of traffic that I get. Each month, I average around 1,800 views…crazy.
So on to the topic at hand…Ironman Louisville (IMLOU). It’s only 17 days away now, so lots of my thoughts are now consumed by the race. I’m approaching this Ironman differently than I did my first one back in 2011. I have a very detailed plan this time around and I’m excited/anxious to see how it all unfolds. My race plan has evolved over the last few weeks after lots of research and self-testing. Some of the research that I came across was very interesting. A website called RunTri.com does a wonderful job taking race results and analyzing the crap out of them (my kind of people). So I’ve looked at all of the data from last year’s race, and here is what I’ve learned…
There are 27 Ironman races held every year (not counting the World Championship). Louisville is consistently ranked in the top 3-4 toughest of those 27. In 2012, it was the third toughest Ironman race in the world based on average finish time. All of the races are the same distance, so average finish time is a pretty good indication of how difficult the 140.6 miles are. The average finish time for IMLOU in 2012 was 13 hours and 41 minutes. Compare that to the “easiest” Ironman, Austria, where the average finish time last year was over two hours faster!
What makes IMLOU so tough? It doesn’t have the slowest average swim time of all the races, or bike split, or even the slowest run…but when you combine all three and sprinkle in a little lot of heat and humidity, IMLOU jumps up near the top of the list. Despite slight difference in the weather, the average times over the last four years have been pretty steady. 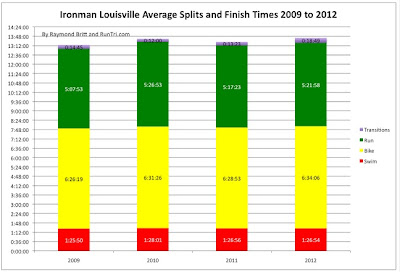 What jumps out to me is the amount of DNF’s (Did Not Finish). Last year, IMLOU had an astonishing 14% DNF rate (it was 16% in 2010 and 7% in 2011). That means that 14% of the people that jumped in the Ohio River that morning never made it to the finish line. Most other Ironman’s have a DNF rate in the single digits, usually around 5%. I attribute this higher than usual DNF rate to the weather…although you think that people would know what to expect and would try to acclimate to the heat and scale back expectations before showing up in Louisville in late August!
When you dig a little deeper into the results, you see that for my Age Group (M35-39), the average bike split was 6:27 and the average run split was 5:19. The average total race finish time was 13:30. So the average guy in my age group spent 47.8% of their time on the bike and 39.4% of their total race time on the run. Let’s compare these percentages to those of the Professional Males. The Pro’s bike split made up 51.7% of their total time, while the run was only 37.2%. If I look at just the top 15 finishers in my Age Group, the average bike & run percentages were 52% & 35%. So what this tells me is that the strongest/smartest triathletes (those that have a very specific race plan), are spending a larger amount of their total race time on the bike. I’m sure that they could go faster on the bike, but they have mastered the art of pacing the bike so that they have enough legs left for a strong run.
If you look at this scatter chart of all 2012 IMLOU finishers, you will see that there were a lot more people that “Rode Too Fast” (top left), than people that rode slow and ran fast (bottom right). 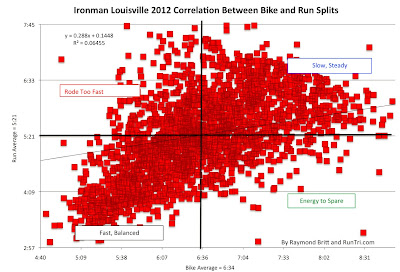 Riding too fast is easy to do and it’s going to take a lot of focus and ego-checking on my part to stick to my plan on the bike. I’ll get passed a lot, but at the end of the day, the only time that matters is the total finish time. This is not a cycling-only race!
The only other race where I have had a chance to implement this strategy was the Cardinal Half-Ironman last month. I paced the bike and ended up having my fastest ever Half-Ironman run split. So I trust that it’s a good strategy…now I just have to execute!
Be sure and visit all of my sponsor’s websites. I sought out these companies because they provide great products and services.
Swag’s Sports Shoes
Rudy Ellis Sports Medicine Center
Garden of Life
GreenBEAN Delivery
Meridian Acupuncture and Herbal Medicine
Earth Fare Supermarket

One Response to “So Just How Hard Is Ironman Louisville?”