I had several goals heading into this race. Top priority was to try and beat my Olympic distance PR of 2:25:11. Granted this time was set on a different course, but with this race being fairly flat, just as that one was, I knew I would be able to challenge that time with a good effort. Another goal was to see just how fast I could do the 40K bike. I stripped off all unnecessary weight (bento box, extra water bottle, even dropped a few pounds myself), and made the bike and myself as aerodynamic as possible. I didn’t tape gels to my top tube like I usually do and I borrowed my good buddy Bill Marks’ aero helmet. I was built for speed! My final goal was to have a podium finish in my Age Group (this is always a goal).
So I started race morning like I always do. Up early and eating a sweet potato. I left the house around 5:30am and made it to the race site around 6:00 or so. After checking-in, I found a good spot on the bike rack nearest the bike exit (where I always try to be). I set up my transition area and enjoyed the spare time I had to chat with my fellow triathletes and those that just came out to spectate. As the clock ticked closer to 7:30, the late arrivals began to flood in. I always arrive early…usually way too early. It’s just my style. I like to take my time and not feel rushed. Apparently most people don’t have the same mentality. It became obvious pretty quickly that there were not enough bike racks to support the amount of people racing. The racks that they used can accommodate 4-5 bikes. By the time the race started, we had 8 bikes on our rack. Needless to say, things were tight.
After the pre-race meeting, we walked down to the swim start. There were 4 waves. Sprint distance women, Sprint men, Olympic women and then my wave, the Olympic men. We were the largest wave and the river current became evident as I tread water waiting for the rest of the guys to get in the river. The water temperature was around 70F, so this was a wetsuit legal swim. I positioned myself to the far right of the pack – furthest away from shore. I didn’t want to get caught up in the may-lay and could see the first buoy clearly from where I was. As we started, I was in a pretty good size pack and drafted on the feet of a few guys…then I was all alone. Once we passed the first buoy (the sprint turn-around), I couldn’t find the second one. I kept looking and looking. I began to notice that I was drifting to the right (further away from shore). All the other swimmers were to my left. I was breathing on my left side, which is opposite from what I normally find myself doing in a race. I only saw random swimmers the rest of the time and assumed that I was at the back of the pack. After the turn around, my drifting to the right was taking me towards the shore. I tried to correct my stroke to swim straight, but this is obviously something that I need to work on in the pool. Whatever side a breathe on, I pull in the opposite direction. This has been a problem for all of my open water swims this season. I finally made it out of the water and wasn’t too disappointed to see my time was 26+ minutes. Based on how alone I was out there, I thought for sure I was going to be around a half hour. I exited the water and started to get my wetsuit off as I ran the 100 or so yards to T1.
1500 meter Swim time (includes run to T1) = 28:29.4 (1:44 / 100 yd)
6th out of 22 in my Age Group
34th out of 138 Overall
I ran into T1 and finished pulling my wetsuit off of my legs. A few seconds were lost trying to get one of my feet out, but nothing too bad. I also struggled to get the borrowed aero helmet on. Overall, T1 was a little slower than usual for me.
T1 time = 0:53.1
4th out of 22 in my Age Group
25th out of 138 Overall
I got my feet in my shoes easily and quickly and was ready to hammer down. As I mentioned earlier, I wanted a fast bike split. So I pushed it from the beginning. I began passing people quickly and only shifted gears a few times. I never moved out of the big chain ring and only came out of the saddle once or twice for a few seconds to give my hip flexors a stretch. My only nutrition was some Hammer Perpetuem that I had mixed in a water bottle. I took a few sips of it when I could, but I often found myself reluctant to even get our of my aero position to take a drink. I coasted into T2 and had another perfect flying dismount. No problems with the bike, this ended up being my fastest ever bike split in an Olympic race…so this goal was accomplished. 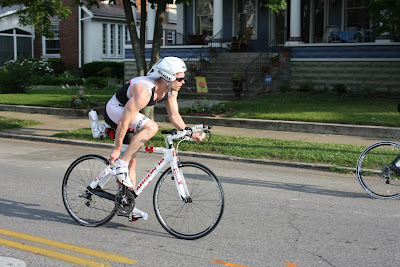 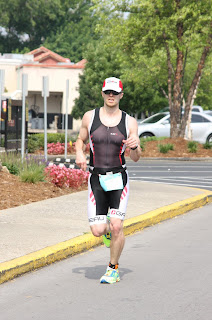 I could tell early on that my legs were heavy from pushing things on the bike. I was surprised to make it to the 1 mile mark in just a little over 7 minutes. This is when I started doing the math. Was my goal of beating 2:25:11 within reach? Absolutely. I grabbed a gel in T2 and felt the need for the energy boast almost immediately, so I took at as soon as I came to the first aid station. Miles 2-3 were slower…and I was starting to pay for the stress I put on my quads during the hour long bike. As my splits moved up to 7:30-7:45 per mile, I asked my legs for more. This is when I felt the muscles in my upper legs start to tighten. If I tried to push it much harder, cramps were going to start. Once cramps start, they are difficult to get under control. So I had to dial back the intensity. This was very frustrating! My breathing and level of exertion were under control, but I knew that my muscles we too fatigued. Around mile 4 I started to get passed by a few people. I just tried to hold a steady pace and keep the cramps from setting in. My quads were screaming at me as I passed the 5 mile mark. Looking at my watch, I knew that it would take a pace of around 7:00/mile for me to get to my goal finish time. It just wasn’t going to happen. I dug deep, but my legs were toast. Adding insult to injury, I was passed in the last 200 or so yards by a guy in my Age Group. I never look back during the run and I don’t know if it would have made a difference. I didn’t see him coming, but I had nothing left anyway. Props to Arthur Kaiser for a strong finish. He beat me by 14 seconds to take home 3rd in our Age Group.
6.2 mile Run time = 48:51.4 (7:52 min/mile)
10th out of 22 in my Age Group
33rd out of 138 Overall
I was really disappointed in myself when I crossed the finish line. To miss my goal time by less than a minute was really tough to swallow. When I looked at the results and saw that getting passed at the end kept me from achieving one of my other goals, I was even more disappointed. I try to keep things in perspective, but I train hard and it’s tough to get so close and miss what you are striving for.
Total Time = 2:26:08.8
4th out of 22 in my Age Group
17th out of 138 Overall
It took me about 24 hours to get over it and move on. Based on how sore my legs are even now, I know that I gave it all I had on Sunday. My next triathlon is a little over a month away and it’s another flat course. I’m more motivated than ever to put in some good work these next three weeks and get my legs better prepared to run after a hard effort on the bike!
Gear used:
2XU C:2 wetsuit
Aqua Sphere Kayenne goggles
Louis Garneau Elite Lazer Tek Suit
Tifosi Dolomite sunglasses
Argon 18 E-112 Triathlon bike
Rudy Project Wingspan aero helmet
Asics Gel-Noosa Tri 7 shoes