I started running for fun while I was in college. Studying for Engineering classes can really drain your brain, so I started running a few days a week to clear my mind. I like goals – so I set a goal to run the miniMarathon in April of 1998 and did so in 2 hours, 13 minutes and some change. That’s a pace of around 10:09 min/mile. The goal was to run the whole race, which I did – with no consideration to the pace that I was running. After the mini in ’98, I took a year off and then picked running back up in 2000-2001 and completed a total of 6 races including the mini two more times, improving my time to 1:46 (8:05 min/mile pace). This 13.1 mile distance was the furthest my body have ever run…until a few months ago.

I took a hiatus from running following the MiniMarathon in 2001…until I did my first triathlon in August of 2008. Through all of my triathlon training the last two years, I had never asked my legs/lungs/heart to carry me more than 13.1 miles. I did a 15 mile run this summer leading up to one of my half-Ironman races, but that wasn’t much different.

As I started building my mileage for the upcoming Indianapolis Monumental Marathon I noticed a change once I attempted to go beyond 16 or so miles. I realized that I needed to do some things different on these long runs. Here’s what I’ve learned that are unique to running long distances:

1) I needed to put Vaseline on my feet to prevent blisters. I don’t get blisters that often, but if one starts to form on a run that’s going to last close to 3 hours, it’s going to lead to a huge problem. Vaseline keeps friction from rubbing my skin off of my feet and toes!

2) Nipple chafing is not cool. I believe that it was during a run of around 18 miles that I started feeling some discomfort on my nipples…yeah, that’s what I said. I tried wearing different types of shirts of varying tightness and fabric, but I found that the only fool-proof way to keep my nips from become bright red and irritated was to put small band-aids over them. I just got to remember to take them off before I walk around the locker room shirtless!

3) Even briefs (aka tighty-whities) move around. For obvious reasons, I wear briefs instead of boxers when I run. I never had an issue with this until I started running longer distances. I found the the briefs rub against the inside of the top of my legs where it meets my torso (in the crotch area). This gets really uncomfortable. So I started rubbing some Chamois Butt’r (which I originally bought for long bike rides) in that area before I run. This stuff holds up a lot longer than Vaseline.

4) Hydration is critical. Hydrating before and after a run is fine while it’s only going to be an hour or so. But I quickly realized that I couldn’t run for over 2 hours without some liquid. I tried several things, including taking my runs by water fountains, but I ultimately decided to break-down and buy a fuel belt. I’ve used it on several runs, and it works great. I filled the bottles up with Hammer Nutrition Perpetuem (Orange-Vanilla flavor) for my marathon simulation last week – yummy stuff!

5) Change is necessary. When you run for over 3 hours at a time, you get a little bored. I don’t use an iPod or any other device that spits out music during my runs, so it’s just me and my surroundings. Running the same route is beneficial because you recognize landmarks and mentally know how far you have left to go, but a change of scenery is nice. I usually do my long runs in St. Matthew’s and Seneca/Cherokee Parks, but there’s been a few times that I just had to switch it up and run somewhere else – even if it was inconvenient.

6) Heart rate training is very important for endurnace. For the last year or so, I’ve been a big believer in training based on heart rate zones. Building a solid base in your aerobic zone will make your heart stronger and more efficient. This philosophy has been driven home over the last two months. I’ve been doing one long run a week, based solely on my heart rate – not letting it get our of my aerobic zone, paying no attention to the pace that I was running. My first few runs were at a pace of 8:30-8:45 min/mile, now I can run a pace of 8:00 minutes per mile or faster without my heart rate getting out of my aerobic training zone…making my heart an aerobic machine! 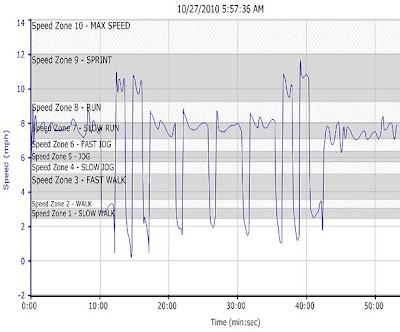