If you are a triathlete, I’m sure certain things immediately come to mind when you hear the term “Ironman”. I first heard this word/term in the late 80’s when I was a lad watching the NBC coverage of the Ironman Championship in Hawaii. The term Ironman to me meant completing a triathlon that was comprised of a 2.4 mile swim, a 112 mile bike, and a 26.2 mile run (140.6 miles).

When I started doing triathlons in August of 2008, my definition of Ironman was the same. I was now educated on the different distances available in the sport, but Ironman simply meant doing the big one. The all-day, ultimate mental and physical test.

The World Triathlon Corporation (WTC) owns the Ironman brand. They are the ones that organize any race that contains the word Ironman with the cool “M-Dot” logo you see to the left. While it would be nice to think of the WTC as just a group of people that like to give crazy athletes a way to test themselves, that’s not the reality. It’s a business…and as we all know, the ultimate goal of running a business is to make money. Just like Nike, Coke, Microsoft, and even Apple, the term Ironman is a brand. So the WTC has decided to cash in on the term, and the logo.

In recent years, the WTC has decided to link the Ironman term and logo with races that are not the “classic” Ironman distance. They have added several Ironman 70.3 races (half the distance of the traditional Ironman), and are now adding 16 Olympic distance races in 2011 that will be called the “5150 Series”. These consist of a 1.5K swim, 40K bike, and 10K run. Add these up and you get a distance of 51.50 Kilometers. So all that’s left for them to attach their name to are sprint distance races…and you know it’s coming.

So I tell you all of this to also tell you that for some reason, all of this doesn’t sit well with me. I feel that the term and logo should be reserved for the full distance Ironman race only. Sure, when people in the triathlon community ask if you have or are doing “an Ironman”, they still mean the 140.6 mile race…but how long before that isn’t the case? Soon, they will need to clarify which distance Ironman they are asking about. Does completing an Olympic distance or even 70.3 make you and “Ironman” or “Ironwoman”? I guess that’s not for me to determine, but in my opinion, it kind of takes away some of the luster of the term when you decide to attach it to so many events.

As a side note, when the WTC decides to add events, they very rarely will create a race from thin air. They swoop in and buy up an existing race. They can take a small, local race and turn it into a huge production…which can be pretty cool and make you feel like a superstar…but there’s a cost that comes with this “upgrade”. For instance, the Muncie Endurathon has been a favorite half-Ironman race of many people in the region for the last 31 years (one of the oldest in the country). While I’ve never competed in the race, I’ve heard great things about it. The race organizers always did a great job and the people of Muncie, Indiana welcomed all the athletes and their families with open arms. Now the race will be called the Ironman 70.3 Muncie and will have all of the pomp and circumstance of an Ironman event…including an increase of close to $100 in the registration fee and a 60 day blackout on other races! Will the race be better for it, who knows, I’m just giving you an example of how the WTC operates. Personally, I like doing the smaller, local races. There are two 70.3 races here locally that I loved doing this year and I hope that they stay small!

SATURDAY’S WORKOUT:
Run
8.0 mile Progressive Run in 1:00:15 (7:31 min/mile pace)
Started off with a conservative pace and slowly ramped up the speed during the run, finishing with a near all-out effort. See the chart below for my mile splits: 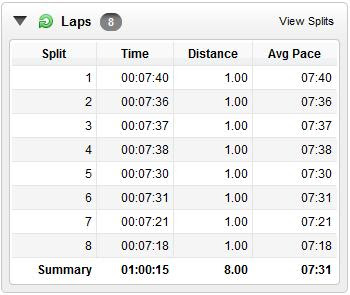