I never knew what I was missing!
After the triathlon season is over, several of my tri-buds like to run trails. I thought about doing it last winter, but never got around to it. This year I knew that I wanted to give it a try, so I went out and bought a pair of trail running shoes a little over a month ago. The next step was to find some actual trails to run. I figured that most parks around Louisville would have trails…I was wrong. I’m sure that there are some short trails somewhere in Cherokee, Seneca and Iroquois Park, but I was looking for a real challenge. I knew that there were trail races at Jefferson Memorial Forest, so I decided to start there.
After finding some maps online, I headed to JMF for my first ever trail run. I was only planing on doing a few miles, and I had literally had no idea how fast I would be. I ran a trail called the Yost Ridge Trail. It starts off going straight up a hill…my heart rate immediately jumped into the 160’s and I knew I was in for a good workout. I managed to only go about two and a half miles, but I learned a lot in that 20 minutes.
I learned that trail running is NOTHING like road running. Sure, you put one foot in front of the other just like you do on the road, but on a trail, you better keep your eyes firmly planted on the trail…one misstep and all kinds of bad things can happen. Tree roots, rocks, fallen limps…these are all things that require you to make split-second decisions and plant each foot very carefully. The hills on trails are like nothing I have ever encountered on a road. Some inclines are so steep (15% grade) that I literally have to use my hands to help me crawl up. I also learned that you can throw pace out the window when running on the trails. A 9 minute mile would be a slow jog for me on a road, but on a trail, it’s about as fast as I can go. My “speed” up some long climbs is closer to 12-13 minutes per mile. Coming back down the hills is actually harder. The trails I have been on are very technical and narrow. There’s no time to “open it up” and run down the hill fast like you can on a road. I have a couple of ankle sprains and a head-first wipe out to prove it! The uneven nature of a trail enlists some muscles that are not used while running on the road. Stability in the ankles, feet and knees is very important. Ever since my Grade 3 sprain back in December of 2010, I have incorporated some ankle strength exercises into my routine. I thought that this had given me strong ankles…I was wrong. Any trail run I do now includes some kinesio tape on my right ankle for added support. 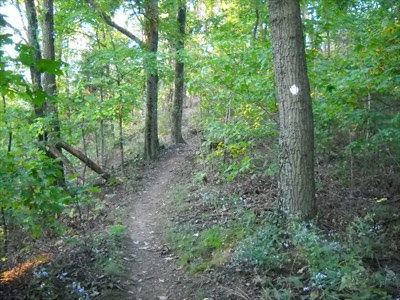 This time of year, actually seeing the trail is pretty tricky. Fallen leaves cover the trail, so there are lots of times when I’m just running…assuming that I’m still on the trail. They have white dots painted on trees next to the trail every so often (see image above), so it’s always nice to see one of those and know that you are still on course.
After only four trail runs, I can honestly say that I love it! I look forward to my Sunday afternoon trail runs more than my road work during the week. I love a challenge, so I’ve run on the difficult Siltstone Trail the last two weeks. Check out this elevation chart from my run this past weekend:
I have my first trail race coming up in a month. It’s an 8 mile run at Otter Creek that is supposed to be very challenging. I have no idea what this trail looks like or how fast I am on trails compared to others. That’s part of the excitement of trying something new! Hopefully this new form of running will benefit me come triathlon season!

One Response to “Trail Running”