Yesterday was election day here in the United States. Everyone was focused (rightly so) on the race for the White House, but there was a bill on the ballot in California that had my attention. 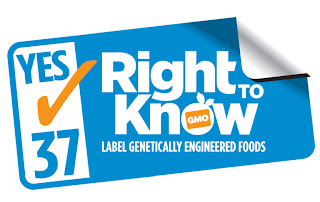 Proposition 37 would have required that most foods containing genetically modified ingredients carry a “Made with GMO” label on the box. Whether you know it or not, genetically engineered corn and soy are pretty prevalent in processed/packaged foods (as much as 80% contain them) these days. The dangers of GMO (genetically modified organisms) foods is a highly contested. GMO’s are designed to be pest and drought resistant and produce more crops. They use labs to create foods that are a mix of genes from different organisms in combinations that would never naturally occur in nature. Supporters of GMO’s claim that they are safe and are needed to solve global food production problems. Not surprisingly, the main supporters of GMO’s are not farmers or consumers (even those in areas of the world that are facing food shortages), but Big Agriculture. It’s no surprise that most GMO’s have been banned in European countries…just like artificial coloring.
A quick Google search will turn up several studies that link GMO’s to significant “organ disruptions” or organ failure in rats and mice. GMO’s also have insecticides IN them. This alone should be enough for you to be concerned. They are new enough (most developed in the last 10 years) that no one has a clue to their long term effects on humans. Bottom line is that these are foods that the human body was not designed to digest and use as fuel. What you put into your body determines how you feel and look not only on a daily basis but also long term.
So back to this Prop 37 measure. It was defeated 53% to 47%. Why wouldn’t people want to know if a food they were eating contained GMO’s? Because they believe what they see on TV. Big Agra spent $46 million in advertising to insure that they would not have to label their packages. Here’s a complete list of companies that forked over the cash. They include Pepsi, Kraft, Bayer, Nestle, Coca-Cola, Kellogg, General Mills, Del Monte, Mars, Hershey, Campbell Soup, Sara Lee…you get the point. The biggest contributor on the list was Monsanto…the biotech company that makes the GMO seeds!
So what did the ads say that scared people into voting no to the labeling? They were told that their groceries would cost more and that GMO’s were safe. Here’s an example:
So there you have it. Companies don’t want to tell you what’s in the food they are producing for you.  This is just another example of how big money talks. If nothing else, I hope this Prop 37 draws national attention to GMO’s and people will think twice about buying ANYTHING that comes in a box! So what else can you do to avoid GMO’s?