My third triathlon of the 2011 season is this Sunday. I’m racing in the three race/two day even known as TriFest. This is the first year for TriFest and all indications are that it’s going to be an awesome weekend and will be an annual event going forward. On Saturday there’s a Super Sprint and Sprint distance race. Then on Sunday there is an Olympic distance race that has an Aquabike (swim and bike – no run) that coincides with it. I’m just doing the Olympic distance triathlon on Sunday, but lots of people have signed up to do all three triathlons – which would be a pretty cool experience!
The weekend is being organized by my favorite triathlon store, VO2 Multisport and my favorite coaching/training organization, Train Smart Multisport…so I’m excited to be able to support both of these guys!
I’ve done more triathlons at this distance (Olympic) than any other. It consists of a 1500m (0.93 mile) swim, a 40K (24.9 miles) bike and a 10K (6.2 miles) run. My times have ranged from 2:56:41 down to 2:25:11. Funny thing is, the race that I’m doing on Sunday is pretty much the same course (with the exception of the bike) down at Taylorsville Lake State Park that caused me so much trouble last June…leading to the 2:56:41 finish time…which included some walking in the run. The temps were in the mid 90’s that day without a cloud in sight. Looks like it might be a repeat this year. Hopefully I’ve learned a little bit about hydration and keeping cool in the last year!
I went to pick up my race packet this morning and the rumor is that the lake water is right around 78° F, which is the cutoff for wetsuits. So I’ll take my suit and see what happens. If the water is still at 78° F when the race starts, I’ll wear it.
As for my goals, it would be awesome to set a PR at this distance, but duplicating the near-perfect race I put together at last year’s BoilerMan Tri is going to be difficult. Especially since that race course was probably the flattest in existence and this course has lots of hills on both the bike and the run. I will be happy with a time somewhere around 2:30:00. This is just a training race for me and it’s a priority – meaning that if I have even a minor injury during the race, I’ll drop out. I never want to quit a race, but the next two months are VERY critical to my Ironman preparation and I simply can’t afford to be sidelined.
Good luck to everyone that’s participating this weekend, should be lots of fun! 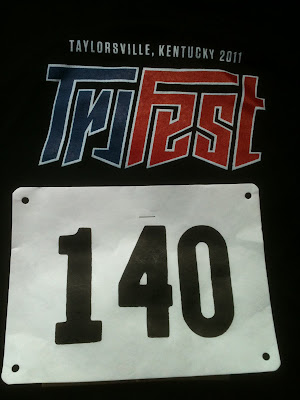 One Response to “TriFest Race Preview”