The Olympics are less than 60 days away…see the countdown clock on the left sidebar. I love the Olympics…especially the summer games. I can’t get enough of it. The level of competition combined with the patriotism is something that I look forward to every 2 years. My DVR will be loaded up with events that I want to watch…which it will probably take me several months to get through. 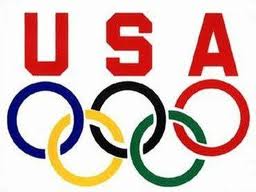 The Men’s and Women’s Triathlon is obviously one event that I will be especially looking forward to. This will be the fourth Olympic games for the sport. The way that the team is selected is kind of strange to those not familiar with the Olympics, but it’s basically the same as most Olympic sports. For instance, Track and Field has the Olympic Trials (held June 21 – July 1). The trials are where athlete’s must earn a spot on Team USA. Maybe you’ve had a fantastic season leading up to the Trials and then just have a bad day. Too bad. You missed your chance…wait four more years. Is it a fair way to decide who represents the USA? Maybe. Maybe not.
The team that will represent the US in the sport of triathlon is determined in a very similar way. Here is the official qualification process from the USAT website:

Athletes are constantly racing to earn points to improve their standing on the ITU Olympic Qualification List, which can help assure the U.S. of earning the maximum three slots per gender at the 2012 Olympic Games.

• At the 2011 London WCS event (Aug. 6-7), the two highest-placing eligible U.S. athletes per gender qualify for the Games, provided they place among the event’s top nine finishers. Gwen Jorgensen and Sarah Groff both qualified at this event.
• Any eligible athlete who did not qualify in London and places in the top nine at the ITU World Triathlon San Diego (formerly WCS) event May 10-12, 2012 will qualify for the team, depending on the number of slots remaining. Laura Bennett, Hunter Kemper and Manuel Huerta all qualified at this event.
• Any slots available following the automatic selection process will be filled by a discretionary selection. Discretionary selections could entail potential medalists or an athlete who can assist the medal-potential athletes through specific team tactics.
• If there still is a spot (or spots) remaining after the two qualification events and one discretionary selection, they are awarded based on placing at the 2012 event.

So as you can see, you basically have three chances to make the team. The first was on the actual 2012 Olympic course at a race back in August. The second was two weeks ago in San Diego. The third is only necessary if not enough US athletes finish in the top 9 of the two races. At that time, a committee would determine who makes the team.
I finally got around to watching the ITU World Triathlon San Diego race this past weekend. I already knew the outcome, but it was still a very exciting race! With the women’s Olympic team already set, there were seven men trying to earn the two spots on Team USA (provided that they both finished in the top 9 overall). Based on their ITU rankings, the favorites were Matt Chrabot and Jarrod Shoemaker.
The race started as predicted, with Chrabot being the first American out of the water, in 7th overall. Hunter Kemper and Shoemaker were both in the top 20 as they started the bike. There was a pack of 8 that went out quickly on the bike. This group included Chrabot. In draft-legal racing, riding in a group is necessary. You can work as a team to keep the pace fast. This group of 8 couldn’t hang on and were eventually caught by the chase group of around 30. So as they came into T2, everyone was basically together.
In races like this, fast transitions are very critical. With nearly everyone coming into T2 at the same time, every second counts. American Manuel Huerta was a long shot to be on the Olympic team, but coming off of the bike, he was right in the mix. Then he knocked out a 21 second T2 and found himself in great position starting the 10K run.
Hunter Kemper started making his move on the run, while Chrabot and Shoemaker faded. Kemper pulled off a 30:27 run split (5th best run) and surprised everyone by being the first American to cross the line and came in 5th overall. The real surprise was that entering the last lap on the run, Manuel was in 10th place overall, without another American between himself and Kemper. Without knowing exactly what position he was in, he just gave it all he had and ended up coming in 9th overall…good enough to become a member of the 2012 USA Olympic team! The best part was once he crossed the finish line, you could see him counting the number of guys that had already finished. When he realized that there were only eight ahead of him, he had this reaction: 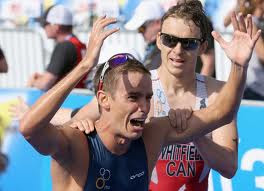 The crazy thing to me about these ITU races is just how close they are. The separation between Kemper (5th place) and Huerta (9th place) was only 13 seconds!

Both of these guys have amazing stories that will hopefully be told during the Olympic coverage.

If you don’t want to wait, you can read about these two guys here: 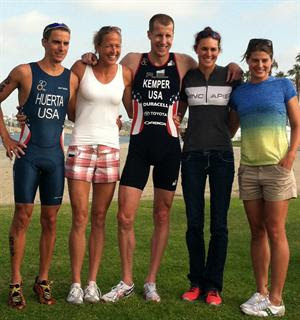