This past Saturday, three individuals were inducted into the USA Triathlon Hall of Fame…including one from just a few miles down the road.

The third class of inductees were Dave Scott, Dave McGillivray and Susan Bradley-Cox. 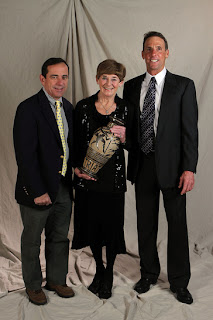 Dave Scott (aka The Man) is simply put, a legend. Dave has competed in the Ironman World Championships 13 times and has racked up a recorded-tying six 1st place finishes, along with three 2nd place finishes, and a 5th place finish in 1996 at age 42.

Dave McGillvray is one of the top race directors on the planet. McGillivray has produced or consulted on more than 900 mass-participatory athletic events throughout the world, including 23 Boston Marathons; the 2004 and 2008 USA Women’s Olympic Marathon Trials; the 1990 Triathlon World Championship, the 1998 Goodwill Games Triathlon, and the 1996 Atlanta Olympic Games.

Susan Bradley-Cox is one of the most decorated age-group triathlete’s of all time. She owns 11 national titles and 11 ITU (International Triathlon Union) world championships. She is the only athlete to be a member of Team USA at every ITU Age Group Olympic-Distance World Championship Contest – from 1989 thru 2010. She also just happens to live in Lexington, KY!

Congrats to the three new members, who join the ten existing members of the Hall of Fame.

It had been 20 days and two hours since I incurred a Grade 3 sprain of my right ankle (not that I was counting). I’ve been doing strengthening exercises combined with icing nearly every day since. I’ve been extra cautious even when just walking up and down steps…to avoid further damage to my fragile ligaments. All of the treatment and rest came together this past Saturday morning. I headed out on my first run since the injury. Not exactly sure what to expect, I decided to take my first run as part of the group that I am working with the raise money for the Kids Center (more on this in a later post). So this group run was just a 3 mile jog at an easy pace on a flat course. Thankfully, everything went well and I only felt minimal pain discomfort in my ankle.
Totals: 3.15 miles in 33:45 (10:44 / mile pace)
Avg HR = 133 bpm

It took about half a mile before my ankle warmed-up and got loose (the 24° temp didn’t help). After that, everything felt normal. I still didn’t want to push it and it will definitely take me a while before I don’t have that running on ice feeling every time my right foot strikes the ground!