I listen to podcasts a lot when I’m riding the indoor trainer. Riding indoors is VERY boring and listening to podcasts helps pass the time. I have a couple that I subscribe to, but one of my favorites is done by Ben Greenfield. Yesterday I listed to one with that discussed using your body’s temperature to burn fat. Not that I’m trying to burn fat, but some of what the guest speaker, Ray Cronise had to say was very interesting.

Ray wanted to lose weight but could not believe losing fat was as simple as calories in-calories out. One of the main reasons why Ray was having a hard time buying into this common myth was because of swimming great, Michael Phelps eats 12,000 calories per day and is ripped. Ray knew that Phelps was certainly not able to exercise enough each day to support the excessive amounts of calories he consumed on a daily basis. So why could Michael eat that much food and not gain weight?
Phelps spends 3-4 hours per day in a pool. Water apparently is 24 x more thermally conductive then air. And if you have ever been in a public pool to swim laps, then you know they keep that water damn cold!
Anyway, Ray figured this out and then did a little self experimentation. In the first 12 weeks he attempted to lose weight before realizing what he did about the water, he lost 21 pounds. That’s 1.75 lbs per week. Not too bad.
After he realized cold exposure was the key to Phelps’ lean body, he lost an additional 27 pounds….but in only 6 weeks! That’s 4.5 pounds per week! 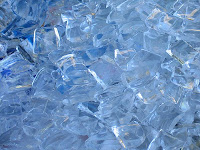 He also talked about taking ice baths (which I’ve done after long runs) and subjecting your body to cold temperatures during training (which I do lots this time of year). Even drinking ice water throughout the day can be beneficial. He’s a former Rocket Scientist for NASA, so he used lots of Thermodynamics terms that I hadn’t heard since Engineering School, but I found it all very fascinating.


In a nutshell, exposing the body to the cold increases a hormone secreted by fat cells that are responsible for fat burning. Your body will burn more fat trying to maintain it’s desired 98.6° F temperature.

So spend some time in the pool and lower that water temperature in the shower a few degrees!