I don’t often do races out of town, but it always makes for a fun adventure. These trips usually involve taking the entire family, but since this one was a longer race (Half Ironman), and I knew that it was likely to be hot, I decided to not ask Jessica to suffer in the heat for over 5 hours while I was racing. Having my friend Aaron along for the trip made for much different conversation in the car than what I typically get with a 6, 4 and 2 year old! 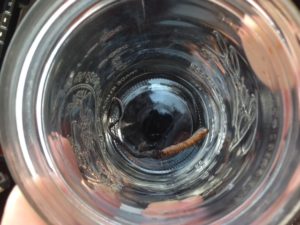 My caterpillar friend in the bottom of the jar.

Aaron and I left around 9:00AM on Saturday after making a pit stop at Meridian Acupuncture & Herbal Medicine to pick up a Cordyceps. I’m sure you are wondering what a Cordyceps is. Feel free to Google it for more details, but it’s basically a fungus that grows out of a caterpillar found in the mountains of Tibet and Nepal. The poor caterpillar burrows into the ground and dies. It’s then pulled from the ground (with the fungus attached to it’s forehead), and cooked up in a tea. So why did I drink the tea and eat this little dude? Because I like to try out new things. There’s a thought that this mushroom might increase energy and reduce fatigue. There’s no research to back this up, and my Chinese Medicine Doctor thinks that it has some important uses for fighting certain diseases, but he’s not sold on the athletic performance benefits…so who knows.

We arrived in Springfield, Ohio around lunch time and grabbed a bite to eat after checking in to the hotel. We then headed over to the race site for packet pick-up and the pre-race athlete meeting. This is the second HFP Racing event that I have done and I’ve been impressed both times with the organization. The athlete briefing was an hour long and answered any and all questions that someone might have regarding the race. After the meeting, Aaron and I drove the bike course since neither of us had done the race before. We got turned around a few times because they had not finished marking the course yet, but we were still able to get a good idea of where the hills and turns were.

After dinner at Rudy’s Smokehouse (I’d only give it a 2 out of 5 stars), we went back to the hotel, mixed up our fuel for the race, called our families and settled in for the night. As a bonus, our room at the Hampton Inn had a mini refrigerator and microwave, so we could get our race nutrition nice and cold! I was awaken several times during the night by thunder. The forecast called for scattered thunderstorms the next afternoon, so the overnight rain was a surprise. 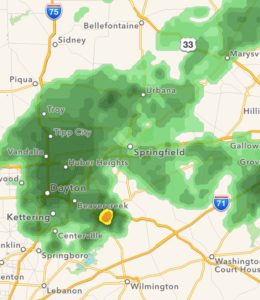 Lots of rain on race morning!

Race morning always starts early for me. I’m sure we were up a little earlier than Aaron would have liked, but I have to stick to my routine! We got everything ready and started to load up the car. As we walked outside, it was still raining. Not exactly what I like to see on race morning. We met up with another athlete from Louisville that was staying at the hotel and the three of us headed over to the race site. It was still raining as we set up transition and there was even a brief downpour – just long enough to soak everything that I was attempting to keep dry.

The 1.2 mile swim was in a reservoir at Buck Creek State Park. It’s really a beautiful park and a beach start/finish is always fun. It’s much better than the muddy banks of a river! The water temperature was in the low 70’s, so it was wetsuit legal. It was a time-trail start with three people going in the water every three seconds. If you read my race preview, you know that I wasn’t too excited about this format, but it did work out well. After delaying the start of the race for 15 minutes, the rain had stopped and I got in a pretty good warm-up swim and felt good from the start. I was in a good rhythm and despite the buoys being pretty far apart, I think my sighting was pretty good. I tried to get behind guys a few times to draft, but I quickly found that they were not swimming straight. So I was basically on my own. I was happy to see that I exited the water in under 28 minutes. The swim time for the race includes running through the beach and then up a pretty steep hill to transition. 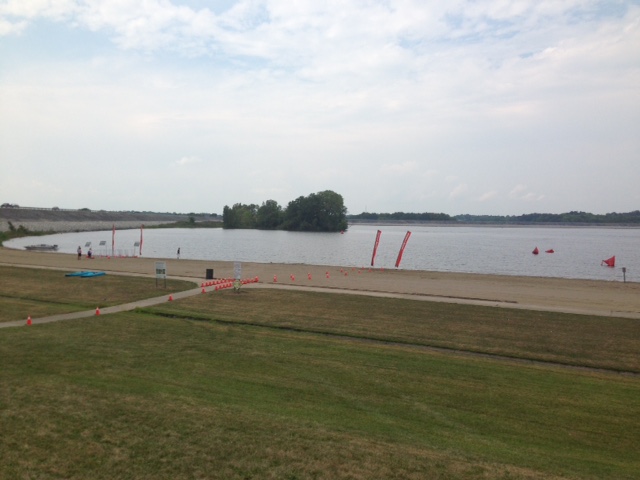 I got my wetsuit off pretty quickly and took my time getting my socks and bike helmet on. There’s no sense in rushing though transition for a race that will take between five or six hours!

The bike course was two times through a 28 mile loop. The route consists of pretty constant rolling hills and a few climbs big enough for me to shift in to the small chain ring. My goal was to hold my power around 210 watts and just as importantly, keep my cadence in the high 80’s. I wanted to see if riding at this higher than usual RPM would keep my legs fresh for the run. I had my watch set up to show total time, power and cadence. I used the time to make sure that my fueling was spaced out appropriately and I regularly checked my power and cadence to make sure they were in line. I also had my auto-lap feature set up to give me a split time every 5 miles. I knew that a 5 mile split of 15 minutes would put me right at a 20 mph average, so I was happy to see most splits coming in between 14:30 and 14:50. I was getting passed by some guys, but I know that during races this long, you can’t let other people dictate how you race. I stuck to my plan and it would ultimately pay off! The course was in pretty good shape and once the sun came out, it ended up being dry for the second loop. Other than the 5-6 mile section with Chip Seal, the roads were in pretty good shape. I rolled into T2 feeling good about my bike split.

Spent the majority of the time in the 85-90 rpm range.

Goal was to average 210W, so I was happy with this distribution.

I pulled on a fresh pair of socks, slipped my running shoes on, grabbed my hat and sunglasses and headed out of transition. I had a fuel belt with two small bottles of my nutrition mix and I put that around my waist as I started the run.

The run is a 6.1 mile out-and-back that you do twice. It starts off down hill, levels off and then you have to run back up the hill to get to the start/finish line where you turn around for lap number two. I could feel the heat on the second loop of the the bike, so I knew that the run was going to be hot…and it was. There were aid stations about every two miles. I drank a cup of water at each aid station and then poured another cup down my back. I was sipping on the nutrition that I had in my fuel belt, but as I headed back to finish up my first lap, I was slowing down. I had planned to keep my heart rate in the high 140’s for the first half of the run, but the relentless sun and heat was making it hard. My mile splits were slowly creeping up – 7:59, 8:00, 8:12, 8:32, 8:41, 9:08, 9:13…things were headed in the wrong direction! I was consistent with taking my fuel and was sure to get water at every aid station. My watch was set up to just show my heart rate and cadence. Similar to the bike, I tried to keep my cadence in the high 80’s. I started off good, but as my mile splits slowed, I was having trouble keeping my feet turning over fast enough (88, 88, 87, 87, 86, 85, 85). As I got to the bottom of the hill and things leveled out around mile 8, I started to feel a little spring in my step. As everyone around me had resorted to a run/walk strategy, I never stopped running – and I was passing a lot of people. My cadence picked back up and so did my mile splits. My last 6 miles were 8:49, 8:43, 8:36, 8:48, 8:41, 8:19. I was hitting a wall with three miles to go and had to dig pretty deep to make it up that final hill heading toward the finish line. One of my goals for this race was to use the exact same fueling strategy that I plan to use during Ironman Louisville next month and I was really happy that I not only had no stomach or GI issues, but that I was getting stronger when everyone else was bonking! 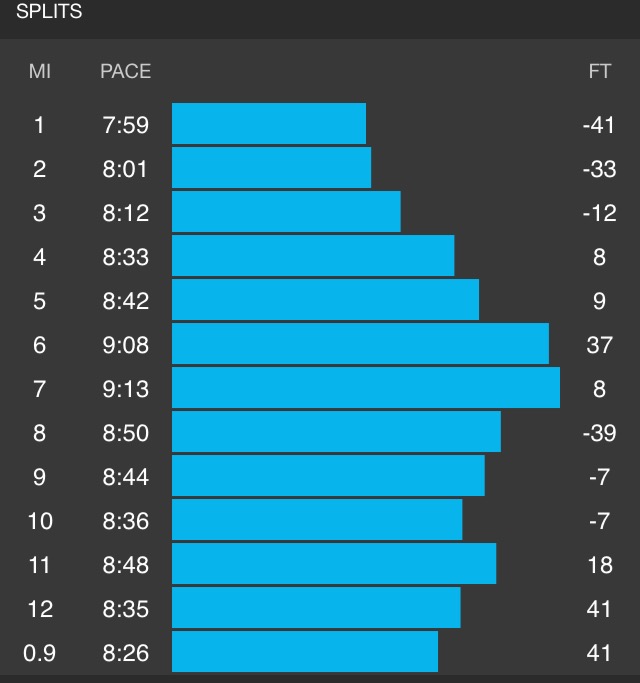 Mile spits – found a second wind for a strong finish!

Despite the hilly bike course and hot and humid weather conditions, I set a new half Ironman personal best by 11 minutes! I have confidence in my training style/strategy and my non-conventional fueling methods (no sugar), but it’s nice to have a race result that proves that what I’m doing is working. 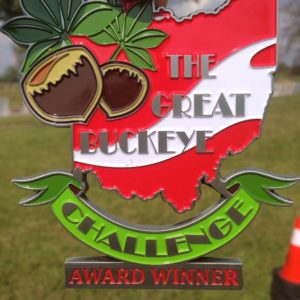 Took home a little hardware for my 2nd place finish.

If I ended the race report now, I’d leave out the adventure we had driving back to Louisville. Aaron and I stopped outside of Cincinnati and ate some Chipotle and got a case of Yuengling (no, we did not drink it on the way home!). As we hopped back on the interstate, Aaron checked is mapping app and noticed that it was directing us around Cincinnati. There was a wreck on I-71 that had it shut down. So we took some back roads, only to run into another accident that had our detour shut down as well! Then it started raining again! After taking a scenic tour of northern Kentucky, we finally made it home around 9:00PM. Our 2 hour and 45 minute drive took us over 4 hours! Sitting in the car for that long after doing a half Ironman had both of us getting out of the car like a couple of 90 year old men. 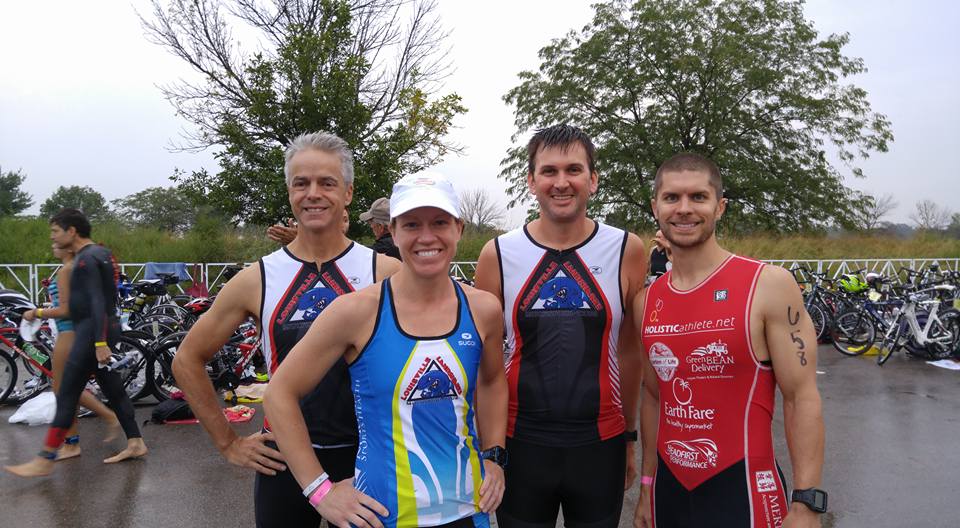 Some fellow Louisville Landsharks before the race.

It was a fun trip and a great race. Now it’s only five weeks until Ironman and these next three weeks will be packed full of hard workouts to top off my training before two weeks of tapering leading up to October 11th. I’m excited to see what I can do this year and I’m even more excited to put the finishing touches on my book and get it out before the big day. If you are interested in being notified by email as soon as the e-book is available, you can sign up here – THE BALANCED APPROACH – How to Compete a Full Distance Triathlon Training Seven Hours a Week.