Ask anyone that owns a boat and they will tell you that it must have a name. People get very creative when naming their vessels. Next time you are out on a lake, river or the ocean, make a point to look at the back of boats and check out the names…funny stuff! 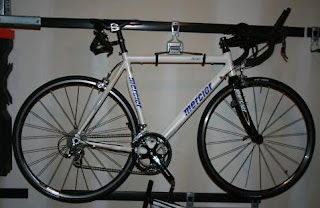 While not everyone names their bikes, I feel like it’s bad luck not to give your bike a name. I named my first triathlon bike White Lightning. It had a white frame with blue lettering. I don’t remember exactly how I came up with the name, but it stuck. I would even call her (yes, it was a female) by her name sometimes during races or tough rides…asking her to step it up a notch or telling her that I was about to put her through hell!

It was tough to sell White Lightning, but in order to upgrade bikes, I needed the cash. I spent over two years riding her (if you just laughed, you have a dirty mind) and countless hours of tune-ups and cleanings. I may have shed a tear when the guy I sold it to rode off.

In late January of this year, after lots of fittings and research, which I outlined here and here, I bought a new bike. I landed on an Argon 18, Model E-112…and I’m completely satisfied with my decision.

No offense to White Lightning, but the Argon is SO much more comfortable, especially when riding down on the aero bars. Aside from comfort and speed (which are most important), it’s a pretty cool looking bike.

Once I brought the bike home, I immediately started contemplating what to name her (yes, it’s another female). At first I wanted to do something in relation to the element Argon, but I couldn’t find anything I liked. Then I looked into something to do with that white hot flame that you see when a fire is at it’s hottest. I did internet searches and spent lots of time thinking…but came up with nothing. I even decided to take the risk and ride a nameless bike. Thankfully, nothing disastrous happened on these rides.

Then, one day last week it came to me. I decided that I wanted to give it a name that somehow tied it into White Lighting. While sitting at home watching one of the many thunderstorms that we’ve had recently I saw the flash of lighting out the window. A light bulb went off in my head. I had thought on a name for my bike….Flash. I’d like to think that giving the bike a name prior to my first triathlon of the season contributed to my fast bike split last weekend!

I had already decided that once I came up with a name, I would get a vinyl sticker made and put the name on my bike. This is something that I never did with White Lightning, but I wish I had. I found a company online that would make me a custom sticker. I found a font that looked like lightning bolts, picked out some colors that would match the bike and ordered two stickers that said Flash. The stickers came in a few days ago and I immediately put them on the bike. Check it out: 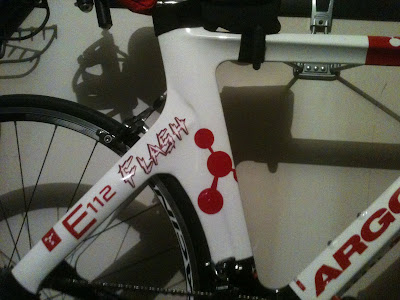 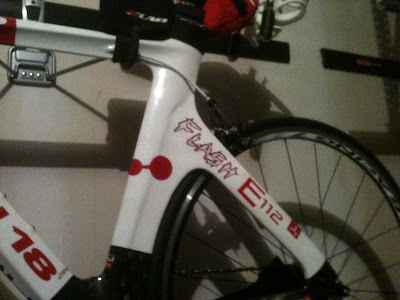 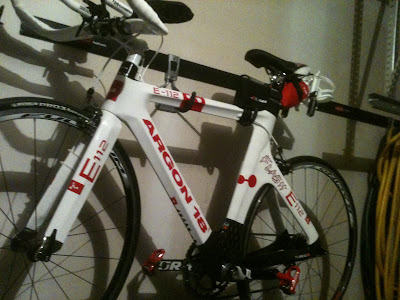 Do I think they look pretty sweet? Yes. Am I a geek? Yes.
As a side note, I have officially completed 18 weeks of the 36 week Ironman training plan that I’m following. That’s right…I’m already halfway there! It’s both exciting and a little nerve racking. See the countdown clock up in the top left corner of this blog. I know that my fitness has improved greatly over the last 18 weeks, but will I be ready for 140.6 miles in just 18 more weeks??? I think so!!

One Response to “Bikes and Boats…They Need Names”