Not only am I following the training plan Ben Greenfield outlines in his Triathlon Dominator program, I’m also going to follow the guidelines he has set for eating (fueling). I’ve eaten what I considered a “healthy” diet for years now, even before I started doing triathlons. However, after reading Ben’s book “Holistic Fueling for Ironman Athletes”, I’ve decided to step it up a notch!

The book taught me that choosing the right food is essential to staying healthy, injury-free and having the energy to complete all of my workouts.

The book spends a lot of time focusing on inflammation and allergens. Inflammation is the body’s natural way of fighting off illness, and lots of food can actually cause inflammation. The most common culprit is sugar, because of its significant effect on insulin levels. Common allergens such as the proteins found in dairy and wheat, as well as peanuts, eggs, and soy can cause digestive issues and cause an inflammatory response as well.

Obviously, you want to avoid inflammation in your body. It can lead to insulin problems, a deficient immune system, gastrointestinal issues (i.e. gas), fatigue, high cholesterol, lower bone density and lots of other health issues. 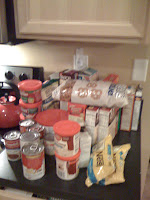 So yesterday, I cleaned out of cupboard and fridge…taking out all almost all of the foods that could cause inflammation. The picture to the right is what I took out of our cupboard (canned soups, boxed dinners, crackers, peanuts, pretzels, icing, etc.). Don’t worry, we didn’t throw this food out – it’s going to be given away. While I was doing this, Jessica made up some meal plans for the week based on recipes and idea’s from the book and we headed out to the grocery to re-stock.

After an hour and a half in the store, we had a cart full of food and very bored 18 month old daughter! Our cart contained lots of fruits and veggies, lean meat sliced fresh from the deli, nuts and grains…and hardly anything with a label on it. The philosophy here is that if a food is in a box, it’s meant to sit on a shelf. If a food can sit on a shelf at room temperature without spoiling, it is full of preservatives, nitrates (used to maintain color), sodium (salt) or other chemicals that are foreign to our bodies.

We spent the majority of our time shopping around the perimeter of the store. The packaged, “fake” foods are usually on shelves in the aisles, while the “real” food (produce, fruits, vegetables, cheese, dairy) is found around the edges of the store.

This week will be interesting. I have a feeling it will take us a few weeks to figure out exactly what and when we are supposed to be eating, but I have no doubt that our body’s will be thanking us in the long term!