First of all, I want to thank my awesome wife Jessica for taking our newborn into the living room for the night so that I could get a full, uninterrupted night’s sleep before the race. Getting a solid 7-8 hours makes a huge difference the night before a race!

I woke up at 5:45am feeling refreshed and ready to go. I ate a sweet potato (my new pre-race breakfast) while I ran through my gear checklist one last time. I checked the weather and was discouraged to see that it was 39°F in Shelbyville, the site of the race. The order of this race has been reversed (run, bike, swim) in the past due to cold temps and I was thinking that this might happen again. So I decided to pack two sets of race clothes so that I would be ready for either order. I had Jessica tape up my injured ankle (yes, she does that TOO!) and I was on my way.

I arrived at the race site around 7:10am and in my typical fashion, I was one of the first people to the race site and I picked out a prime spot to rack my bike. I like to take my time setting up my transition area and get checked-in, body marked, etc. I also like to have time to relax before the race starts. I confirmed that the race would follow a traditional swim, bike, run format and then I got dressed. 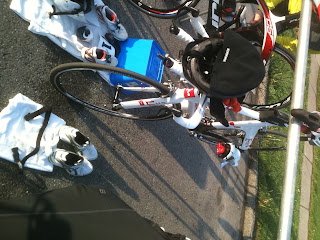 It was cold and windy as I set up my transition area and I contemplated what I would wear on the bike. Transition times are very critical in these short sprint distance races, so any time that I took to put on a shirt, jacked, hat and gloves could be precious seconds lost. I decided to just go with a hat and gloves. If my ears and hands are warm on the bike, I’m usually good to go.

I ate a bag of PowerBar Energy Blasts about 20 minutes before the race start and headed to the pool for a quick warm-up. The water was warm, but once I got back out of the water, my body cooled down very fast. I was not looking forward to the bike!

Because the swim for this race is in a pool, it has a time-trial start. This means that everyone lined up and got in the pool one at a time, with a 10 second gap between each participant. When you registered, you had to give your estimated swim time, so that they could line up the faster swimmers first. Of course, people either lie or just don’t know how fast they can swim (which shouldn’t happen either). The first person in the pool was #664. I was #709…so I was around 30th in line (there were some gaps in the numbers). I ran into some traffic about 150 yards into the 400 yard swim and had to pass a few people…which is a difficult task having to go three wide in a single lane. I felt like I was swimming at a good pace, but knew that I wasn’t pushing to too hard. Maybe I should have. My swim time ended up being exactly 7:00, which works out to a pace of 1:45 per 100 yards…which is the pace that I can hold for more than triple this distance! My swim time was the 3rd fastest in my age group and 37th overall – LOTS of room for improvement here!

I ran from the pool out of the building into T1. I put on my hat, helmet, sunglasses, race belt and socks and was out of transition in 1:16.6, which was the fastest T1 in my age group and 4th fastest overall.

Once out on the bike, I put on my gloves and got my feet into my bike shoes, which were already clipped in. I got settled in and started to hammer down on the bike. This was my first race on my new bike and I wanted to push it pretty hard. I just came up with a name for my bike last week (to be disclosed in a future post), and I think giving her a name was good luck. I immediately started to pass the faster swimmers and lost count after passing around 15 people. This was a short bike (only 16 miles), and despite the rolling hills and wind, I never moved out of the large chain ring on my front crankset. I glanced at my bike computer a few times and knew that I was averaging around 21-22 miles per hour. The last 3-4 miles were against a pretty strong headwind, but I was determined to keep my pace high, so I got down as low as I could on my aero bars and pushed it until my quads were burning. My bike split was 43:44.6, which averages out to 22.0 mph. It was good enough for first in my age group and 8th overall. I was never passed on the bike, which has become something that I strive for in races. I’ve only been passed once in a race on the bike. Ever.

I took my feet out of the shoes and coasted into T2. I hopped off my bike, racked it, took off my helmet (don’t want to be the guy out there running with this helmet still on!) and gloves, slid my feet into my running shoes and took off. T2 time was just 31.3 seconds, which was fastest in my age group and 4th fastest overall. 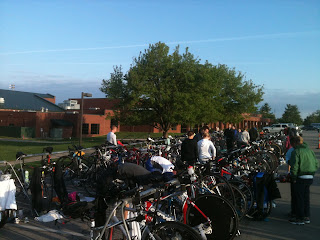 My toes were completely numb after the bike and it took a good mile or so into the run before they regained feeling. I was running pretty hard right off the bat, but was holding a little back. I wasn’t sure how my ankle was going to feel, but I figured that the only way to know was to run and see what happened. The run course is a mix of paved and gravel trails. It even includes a short run over a bridge. The miles are not marked and I wasn’t wearing my GPS watch, so I really didn’t know what pace I was running until I got to the turnaround at the half-way point. It was about 10:30, so I knew that I could get under 21 minutes if I had anything left in the tank for the last 1.55 miles. The run went by really fast and I went into an all-out sprint for the last 1/4 mile or so. I crossed the finish line with a 5K time of 20:31.9, which is a pace of 6:37 per mile. My run split was the fastest in my age group and 10th overall.

I was very excited once I finished and scrolled through my watch and found my overall time of 1:13:04. My goal was 1:19, so I demolished it. I grabbed some water and waited around for some friends to cross the finish line. I went inside and ate a banana and a hand full of jellybeans (it IS Easter season after all!) from the table of food. I knew that there were only a few people that finished ahead of me, and asking around I figured that I might have placed in my age group. So I hung out and waited until everyone finished…which gave me plenty of time to get transition cleaned up and everything loaded in to my truck before the awards ceremony.

As the race director was giving out awards, he got down to the Male, 30-34 age group. I was fully expecting to hear that I finished 2nd or 3rd, but I was surprised to hear that I came in first…and it wasn’t even close. I won my age group by almost seven minutes! My time ended up placing me seventh overall and I wasn’t too far from placing in the top three. The third place overall male finished in 1:10:12, just 2 minutes and 52 seconds quicker than my time. Fourth place was 1:11:34, fifth was 1:12:43 and sixth was 1:13:01.

With some improvement in my swim, who knows, I may get there one day. The race went really well and was a good start to the triathlon season. It’s nice to see all of the training pay off on race day. All of those early morning workouts and depriving myself of unhealthy food was well worth it once I crossed the finish line! This is some good motivation moving forward.