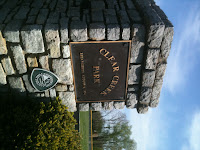 My 2011 triathlon season will begin Sunday morning around 8:30am. I’m participating the a Sprint distance race is Shelbyville, KY. The race will consist of a 400 yard swim in a pool, a 16 mile bike through rolling hills and then a 5K run that consists of a mixture of pavement and gravel trails. The race takes place at Clear Creek Park.

This race is the fourth and final in a series of races put on by Headfirst Performance, a race organizing and timing company that does a lot of the local races. I’ve done one of these four sprint races each of the last two years and they are always a great way to start off the season. The weather is always a toss-up this time of year, but Sunday looks to be sunny and in the high 40’s/low 50’s around race time…which might make for a chilly bike ride out of the water, but the sun will help! 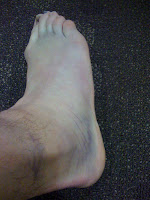 As for my goals for this race, number one is to stay healthy. I rolled my right ankle again (same one that suffered a grade 3 sprain the day after Christmas – see lovely picture to the left) this past Monday while going an easy jog after my speed intervals. I scrapped the rest of my planned runs for this week, but it’s still a little swollen. I’ll tape it up for the race and hopefully it will be a non-issue. This race isn’t a priority for me and since I’m using it more as a training race, I won’t hesitate to stop if my ankle hurts during the run.

My second goal for this race is to have smooth and quick transitions. I’ve been swimming, biking and running again for four months, but it’s been seven months since I raced…and I haven’t practiced transitions since then (shame on me).

The third goal is going to be a time that I’d like to finish in. I’ve never done this particular bike course, so estimating a time on the bike will be difficult. I’d like to do the 400 yard swim in under seven minutes, have transitions around a minute each, a bike with an average speed of 20.0 mph and a run with a pace of 6:45-7:00 per mile. All this adds up to a total time of 1:19:00. I don’t know how realistic this is, but I like to have a goal time.

More than anything, I’m just excited to get the race juices flowing again. I’ve been doing road races (running only) over the last two months, but I just don’t get as excited for these as I do for triathlons.

2 Responses to “Welcome to the 2011 Triathlon Season!”