My race day started at 12:00am Sunday morning as I was leaving the airport parking garage. After spending less than 24 hours in Miami, I wasn’t able to get an earlier flight home…so needless to say, this wasn’t the best way to rest up for a race.

By the time I got home and settled in, it was after 1:00am. Since I had been out of town, I hadn’t had a chance to get all of my race gear ready. I normally do this a day or two before the race, but I was forced to set my alarm early and do this race morning. So after only a little under 5 hours of sleep, I was up at 6:00am going over my checklist and packing everything I needed.

The large unknown was what I was going to wear during the bike and run. A quick check of the radar and forecast revealed what I was afraid of…rain…and wind! The temperature was in the high 40’s, which is actually pretty ideal for a race, but when you add in some rain and wind, 40 degrees isn’t quite as nice. I decided to pack two options: 1)a racing singlet (with no sleeves) and 2)a pair of swim shorts and a long sleeve Under Armour shirt.

Once I arrived, I decided to go with option 2 on the clothes…it was cold!

Despite the fact that I registered the first day the race opened up, my name was not on the list. Fortunately, they were accepting race day registration (which is not always done). So I got my bib (#644) and had my transition to set up when it started to rain. It was about 8:15, so after getting everything set up, I headed in to the pool for the pre-race breifing.

The swim start was staggered based on anticipated swim time. Since they didn’t have me registered, I was thrown in the middle (started 44th out of 88). After talking with the people in line around me, we all expected to have swim times in the 7:00-7:30 range, so I was excited not to have to try and pass many people in the pool.

It’s kind of discouraging standing there, still waiting to enter the water when you see the first few competitors already exiting to the pool heading to T1! I was so eager to get in the water that I took off way too fast. I’m not sure what my time was for the first few laps, but I passed two people and quickly realized that I was running out of juice! One of the guys that I passed caught back up and I tucked in behind him for the remaining 2 laps.

Swim time was 7:16.6, which was almost a minute faster than last year, but still not where I want to be. It ranked 33rd out of 88 people…that’s not good. Looking at swim times for people with comparable bike and run times as mine, I need to knock about another minute off. I’m sure it can be done, my form is better, but still needs some work!

Despite going out too fast, I felt good leaving the pool and wasn’t surprised that it was poring down rain as I headed outside. I was surprised to hear Jessica’s voice saying “Yeah, go Daddy!” as I ran from the pool to outside. I wasn’t expecting her and Kate to be there. I told them to stay home when I left because of the weather, but my loving wife came out to support me anyway!

Transition 1 was a slow! The main reason was the extra time that it took me to try and put on my Under Armour shirt. Ever try and put on a tight, long-sleeve shirt when you are wet? Not easy. I knew that this would be tough, so I had a few towels there – with the thought of drying off first – but the pouring rain left the towels soaked.

T1 time was 2:00.3 – which was 35 seconds slower than last year…about the amount of time it took me to put the shirt on! My time was somehow still 10th fastest…what are these people doing??

Socks, bike shoes, helmet, glasses…and out of T1 onto the bike. The clear glasses that my parents got me for Christmas really came in handy. It was too dark to wear sunglasses, but riding in the wind and rain without any eye protection would have been a big problem!

I love the bike portion of triathlons because it’s my strongest discipline. I started to pick people off left and right. The hills were tough and my legs were burning, but I continued to make it my goal to pass as many people as I could. After the first few miles I was completely soaked. The bike route was an out-and-back. Six miles out, then turn around and go back. I didn’t notice the wind until I made the turn around…then I really noticed it! I’m not sure what the wind gusts were, but they were blowing me all over the road. Not to mention the extra power required to get up a hill when the wind is blowing right in your face! My calves started to cramp up about mile 9 or so. I started to down Gatorade to try and keep the cramps from getting worse…I was starting to worry about the run!

As I headed back into transition, my legs were burning but my confidence was high. I think I passed around 12-15 people during the short, 12 mile ride. My bike time was 36:49.8, which translates in to 19.6 miles per hour. My bike time ended up being 10th fastest out of 88 racers. Not too bad considering some of the expensive bikes that I saw some people pushing!

Not wanting to run in wet socks, I had another pair tucked into my running shoes. They were wet, but not soaked. The change of socks is to blame for the additional 25 seconds in T2 this year compared to last year. T2 time was 1:04, which is very slow for T2.

Trying to get your legs to run after riding a bike as hard as you can for 36 minutes is difficult…much more difficult than I remembered. They first half mile or so of the run I felt like I was running with 10 pound ankle weights on! Since were no mile markers on the 5K course, I really had no idea how fast  I was running. I just kept my legs moving as fast as I could.  The calf cramps never came back, so that was a relief! I passed three people and even heard a “I hate runners” comment. What? I’m a runner? I’ve never thought of myself as a strong runner, but as I heard this comment, I got a little boost of energy to help me make it up the last hill. As usual, I forgot to hit my watch as I passed over the mats heading into and out of transition, so I really didn’t know what my run time was. All I know is that I had nothing left as I ran back into the parking lot to the finish line.

I checked my watch at the finish line and was happy to see that it was 1 hour, 10 minutes and some change. My goal was to beat last year’s time of 1:13:41, so I was happy. Despite the weather conditions, I was able to knock 2 minutes and 52 seconds off of my time from a year ago. Training pays off after all!! Good first triathlon of the year…can’t wait for the next one!!

Here’s some pictures of the race courtesy of Tricia, whose husband Bob also did the race…and knocked almost 4 minutes off of his time from last year!! 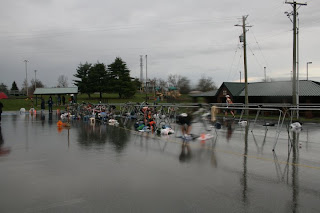 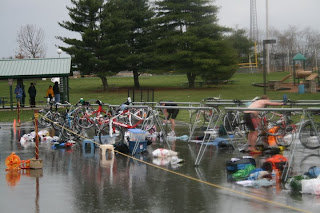 This is me in T2, changing socks before my run. 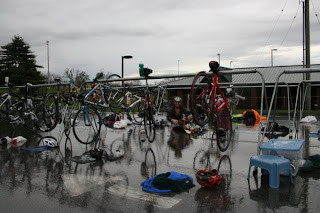 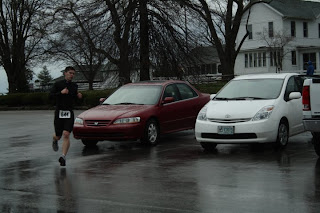 Me heading towards the finish line. Not sure why it looks like I’m running so crooked…maybe this is how I run when I’m completely out of gas!
Updates on my last few days of training will come tomorrow.