The topic of sports drinks came up between myself and a few other people that were still on the bikes after Spin Class this morning. I only had my bottle of water while others were drinking PowerAde. They wanted to know why I didn’t have a sports drink with me if I planned on riding for over 2 hours. I hadn’t really thought about it. I used to drink a Gatorade (orange is my favorite) after every workout as part of breakfast. As part of my plan to cut out all most unnatural sugars a few years ago I did away with the Gatorade and moved strictly to water. So this got me thinking…should I be drinking something other than water during long workouts?
The answer is one that I already knew…YES!

According to Joe Friel in his book “The Triathlete’s Training Bible”, for an hour or less of training, water is all you need. For longer workouts you also need carbohydrates (somewhere between 120 calories and 500 calories). These carbohydrates should be mostly in the form of liquids from a high-glycemic-index source. The best choice is your favorite sports drink. You could also use gels, chased immediately by lots of water.


Gatorade – The original sports drink provides 14 g of carbs and 110 mg of sodium per 8-oz. serving.
G2 – Gatorade’s low-calorie offering contains only 25 calories per 8-oz serving while retaining the sodium content (110 mg) of the original Gatorade. But it’s lacking in Carbs (only 5 g)
Gatorade Endurance – Gatorade Endurance is Gatorade with extra sodium (170 mg) and 13 g of Carbs.

PowerAde – Coca-Cola’s primary sports drink offering has more carbs (17 g), but less sodium (55 mg) than its main competitor, Gatorade.
PowerAde Zero – Zero calories means zero energy, so don’t expect this product to perform any better than water, although you may find it tastes better.
PowerAde ION4 – This is the new Advanced Electrolyte System by Powerade. 100 mg of Sodium and 14 g of Carbs. 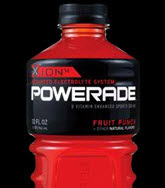 Accelerade Hydro – Research has shown that Accelerade Hydro, thanks to its 4:1 carb-protein ratio, is as effective as a regular sports drink with 30 percent fewer calories. (180 mg Sodium; 10 g of Carbs)

Propel – Marketed as a “fitness water” rather than a sports drink, Propel contains only 3 g of carbs per 8-ounce serving.

So here’s the contenders:

Tomorrow I will explore the cost of each of these…

TODAY’S WORKOUT:
2:15 on the bike in zone 2. A few small hills today, nothing too bad. Despite coming in off a rest day, my legs felt tired. I struggled through, but hopefully this isn’t a precurser to the whole week!
Avg. HR = 126 bpm
Max HR = 148 bpm