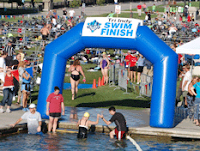 So my times we’re exactly on par with my goals…but regardless of how hard you train, things don’t always go as planned on race day.

Woke up at 4:30am and ate a bagel with crunchy peanut butter and a PowerBar. Washed them down with a Gatorade. Packed up the car and headed down to the race site around 5:30am. Got there and was one of the first people to set up in transition, so I had plenty of time to get me area all set up. Things were a little cramped with 8 bikes per rack, but we managed to squeeze everyone in. Something that I noticed while watching everyone set up is that this was the big leagues…little bit different than the short races I’ve done. Lots of professional bikes and gear, pretty impressive stuff!

After the pre-race instructions, we all walked the 1.5K to the swim start. The swim started in waves of 30 people, I was in wave #4. Didn’t get much chance to warm-up, but I was ready to go once I saw Jessica, Kate and Sona on the bank cheering me on. Got up near the front and quickly realized that I needed to get out of this mess of people. There were arms, legs and bodies everywhere! I think I accidentally grabbed some woman’s butt. I dropped back and got into a good rhythm. The swim took place in a canal that is roughly 30 feet wide. THE BAD: I thought that I was swimming in a straight line until I nearly hit the wall on the right side twice. I can’t imagine how many extra meters I swam by zig-zagging instead of swimming straight. Got kicked in the face about half way through and swallowed a lot of water. I tried to keep swimming, but I had to cough. You know that feeling…when you try to keep from coughing, but you can’t? So I had to stop for a few seconds and clean out my lungs. After that I got back to moving forward and just tried to stay calm and keep swimming. This was my first open water swim, so I can’t bee too disappointed in my time, but I know that I can definitely improve on this time by practicing my sighting (learning to swim straight) and getting more comfortable swimming without being able to see the bottom. – As a side note, the water temp was 78F, so wetsuits were legal. Wetsuits make a HUGE difference! With a wetsuit on, you float…you don’t have to kick your feet to swim. Not that I’m making excuses, but I don’t own a wetsuit!

Climbed up the steps out of the water and looked down at my watch to see what my swim time was…I was amazed to see that I completed the swim in 00:00:00! Or maybe I just forgot to hit the start button. Not having any idea how fast or slow my swim was really was a mental block for me. I need to know if I’m on pace to reach my goal!

THE GOOD: T1 went good, I was on my bike and out on the course quickly, nothing I could have done any different. My T1 was the 10th fasted in my age group.

Once the course turned onto a straight run, I began methodically taking down the competition. I’ve always been strong on the bike and I was passing people the whole way. I’m sure one of these people I flew past was the joker that kicked me in the face during the swim! With more time to look at the results, I could probably figure out exactly how many people I passed, but I’m going to guess it was around 50 or so. I took in a gel about half way through the bike and had a few sips of diluted Gatorade too. The bike course was two 12.4 mile loops. THE STUPID: After the second loop, I knew that I was getting close to the transition area and was looking for signs. Unfortunately, I missed the turn off and rode an extra 10 seconds or so before realizing. I had to turn around and probably lost about 30 seconds by making this stupid mistake. My bike time was still the 7th fastest in my age group, which I am happy with. I’m sure those other 6 dudes have much more expensive/faster bikes!

THE STUPID: Heading into T2 was a little crazy. There were about 4 of us all dismounting the bike at the same time. I had my feet out of my bike shoes and was coasting into the dismount area. Suddenly, about 10 feet from the dismount area, the guy in front of me decides to suddenly stop. I had to lock up my brakes and jump off my bike to keep from hitting him. In the process, one of my shoes unclipped and went flying. So I had to go back and get my shoe to keep from getting a 2 minute penalty!

After I finally made it into T2, my transition went about as well as I could have expected. Racked the bike, took off my helmet, slid my run shoes and hat on and was out on the run. My T2 time was a little longer just because of the time lost running back to get my shoe!

THE VERY BAD: My legs felt a little tried when I started the run, but that’s typical. Problem was, the miles were not marked on the course, so I had no idea how fast my pace was. All I knew was that it was very sunny and there was no shade to be found. I was taking water at every aid station and dumping water over my head to try and cool down. Much like the bike, the run course was two loops (3.1 miles each). I did the first loop in around 27 minutes, so I knew that I was a little off my pace, but I thought that I had enough gas in the tank to speed it up on the second loop. I felt that I was running at my goal pace of around 8:30/miles, but as I kept glancing at my watch, I could tell that I wasn’t. I asked my legs for all they had and there was nothing left. I pushed it as hard as I could the last few miles, but I was done! My run time was very disappointing and is really what kept me from being happy with my overall race.

Finished 30th in my age group and 189th overall. MORE GOOD: Even though I didn’t reach my goal time, I still enjoyed the race and had a lot of fun spending time with friends and family in Indianapolis. Got to spend Saturday night with Sona and Dave; then after the race, we met up with my Parents, Aunt Nita, Uncle John, cousins Amy and Leslie and my good buddy Jeff for lunch. I didn’t so much enjoy the 2-1/2 hour drive back to Louisville, but I sure did enjoy hitting that pillow last night!