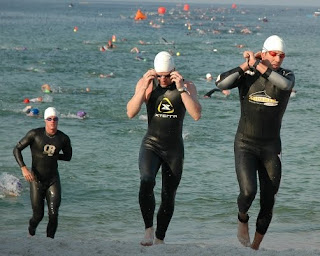 So the Tri Indy was the first triathlon I participated in where wetsuits were allowed for the swim portion. I had heard a lot about people using them in open water swims, but to me, I thought of them as just something else to slow you down in T1. After all, it’s not easy getting out of a wetsuit in a hurry.

After being passed by several people in wetsuits during the swim and listening to Jessica describe how effortless their swimming appeared, I decided to look into this a little more.

It’s a fact – triathlon wetsuits help you swim easier (same speed but less energy cost) or they help you swim faster (faster speed but same energy cost). The USAT rules state that the water temperature must be 78F or below in order to wear a wetsuit. Magically, the temp of the canal on Sunday was exactly 78F, hmmmm.

What is the primary way that a triathlon wetsuit helps you swim faster? Floatation – drag reduction – the wetsuit puts your body in a great swimming position (horizontal) regardless of your head position or regardless of where your eyes are looking. Your head position generally controls your body position, and a good head position generally results in a good body position – but with a swimming-specific wetsuit on your body, your head is taken out of the equation. The wetsuit material should also offer a slicker surface than your skin, further reducing drag.

So why doesn’t everyone wear them? One main reason – they are EXPENSIVE! A decent one will run in the $300 range. A top of the line tri wetsuit is closer to $1000.

This might come off sounding like sour grapes, but I feel like wearing a wetsuit is kind of like cheating. First of all, the main reason that wetsuits are allowed for triathlons is because sometimes the races take place in bodies of water that are cold. A wetsuit is also a good way to keep warm in cold water. That water on Sunday felt like bath water – no one was wearing a wetsuit to keep warm! So why did the USAT set the cut off at 78F? I don’t know, but I for one, feel like it should be lowered to somewhere around 70F.