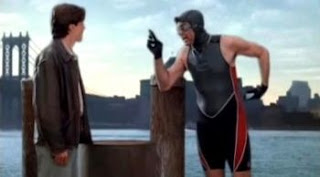 KRAMER: Well my swimming pool problems are solved. I just found myself miles and miles of open lanes.

JERRY: What is that smell?

JERRY: You’re swimming in the East River? The most heavily trafficked overly contaminated waterway on the eastern seaboard?

JERRY: How could you swim in that water?

KRAMER: I saw a couple of other guys out there.

KRAMER: Floating, they weren’t moving much. But they were out there.

For those of you that watch Seinfeld, you will recall the episode where the above exchange takes place. This is pretty similar to the conversations that I have with people when I tell them that I’m going to swim 1.2 miles in the Ohio River this Saturday morning.

It’s an organized event, so there will not only be other swimmers, but there will be lifeguards and people in kayaks along the route. If I’m going to continue to do longer distance triathlons, I need to get accustomed to swimming in open water. So I decided to go ahead and sign up for this swim. I’m just hoping it doesn’t rain too much this week…I would really like to avoid trying to dodge tree limbs.

I’m sure Jessica will have my soap and shampoo sitting on the back porch when I get home – a garden hose shower will be required before I’m allowed to enter the house!