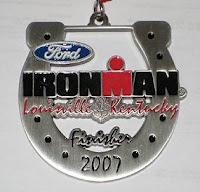 Over the last few days, my wife Jessica and I have had a recurring conversation. The topic has been whether it’s good or bad for the sport of triathlon that the number of people competing in the full Ironman distance races continues to rise while the number of participants in the shorter distances doesn’t.

The Ironman race here in Louisville last Sunday was started by almost 3000 athletes. That’s the largest ever…in any Ironman race…in the world! Ironman used to be reserved for only the elite athletes in the sport. Now it’s become so “common” to compete in an Ironman, that the top athletes have looked for something even more challenging. Hence, events such as the double iron triathlon have come about. More extreme formats have evolved; there are in fact triple, quadruple, quintuple, deca, and 15× events that are multiples of the original Ironman distance triathlon.

The sport of triathlon offers several distances. Sprint, Olympic, Half-Ironman, Full Ironman, and then those events listed above that literally take several days to complete.

Joe Friel is an expert endurance sports coach. He’s coached Olympic and triathlon champions for years, has published several books and is looked up to in the sport. Here’s part of a recent post on his blog:

It used to be that a fast Olympic-distance race was considered quite an accomplishment. Now it pales by comparison with the Ironman. Ironman has become such a force in the sport that you aren’t considered a “real” triathlete unless you’ve done one, or, better yet, finished Ironman Hawaii. I seldom come across a triathlete any more who isn’t at least thinking about doing an Ironman in the not-too-distant future.

I also come across people who have never done a triathlon at any distance and are contemplating doing an Ironman as their first race. There’s no concern for how fast they might go. It’s just get to the finish line so they can hear those magic words, “You’re now an Ironman.” Then they can get a tattoo on the ankle, I guess.

Most “normal” people have no idea what it takes to even finish an Ironman. They see TV coverage and it looks so easy. Of course, the pros in any sport will make it look easy. It isn’t. Most people couldn’t sit in front of their televisions for 17 hours let alone swim, bike and run that long. Most are doomed to failure by starting at this distance. It would be better had they started with a sprint and five years later did an Ironman. But that’s too time-consuming for people today, it seems.

Our fascination with long-distance events concerns me. I don’t think it’s good for the future of any endurance sport when going slowly for a long time just so one can cross the finish line is held in higher regard than going very fast for a short distance. The person who starts out with an Ironman will likely have a very short triathlon career. Then what? Three-day adventure races? And after a couple of those what’s next?

Perhaps I’ve become an old curmudgeon who longs for the good, old days when distance wasn’t the key issue; speed was. Of course, there will always be athletes who strive to see how fast they can go at short distances. But they seem to be a slowly diminishing breed of endurance athlete. One good thing I see about this shift in attitude in sport is that it encourages more people to participate. Finishing is a lot less challenging than going fast.
color=”yellow”>

While I understand that just finishing an Ironman is a huge accomplishment, I feel that when people start the race knowing full well that they will be taking it easy on the bike, then walking the majority of the marathon, it’s kind of cheating the sport. It’s called a “race” for a reason. Having to walk the run portion of the race because of an injury is one thing. But not putting in the training to even have a chance to run the marathon is what irritates me. Am I wrong on this??