The Buffalo Trails Triathlon takes place in the beautiful and historical areas of Maysville and Mason County, Kentucky. I was curious as to why they call this race, the “Buffalo Trails” Triathlon, so I did a little investigating. Before European settlement, herds of Buffalo migrated along a route which passed through the Maysville area from Ohio, crossing the Ohio River, to the salt licks in Kentucky. The Ohio River was not dammed at this time which made the shallow river passable by the herds. These buffalo trails were used by settlers and later turned into roads. This buffalo heritage is the namesake for Buffalo Trails Multisport Racing.

This will be the fourteenth year for the race, but only my second time toeing the line. The race has always been held in May, but this year it was moved to September due to shrinking numbers over the last few years. The signature of this race is not only the swim in the Ohio River, but the big hill on the bike known as “Big Hiney”. This hill is a little over 3/4 of a mile long with an average grade of 9% while peaking out at over 15% grade. There’s no getting around it…it’s a big hill. I had heard all about it before doing the race last year and I have to admit that it didn’t end up being as bad as I had anticipated. We’ll see what Saturday holds, but I’m planning on dominating Big Hiney again this year! 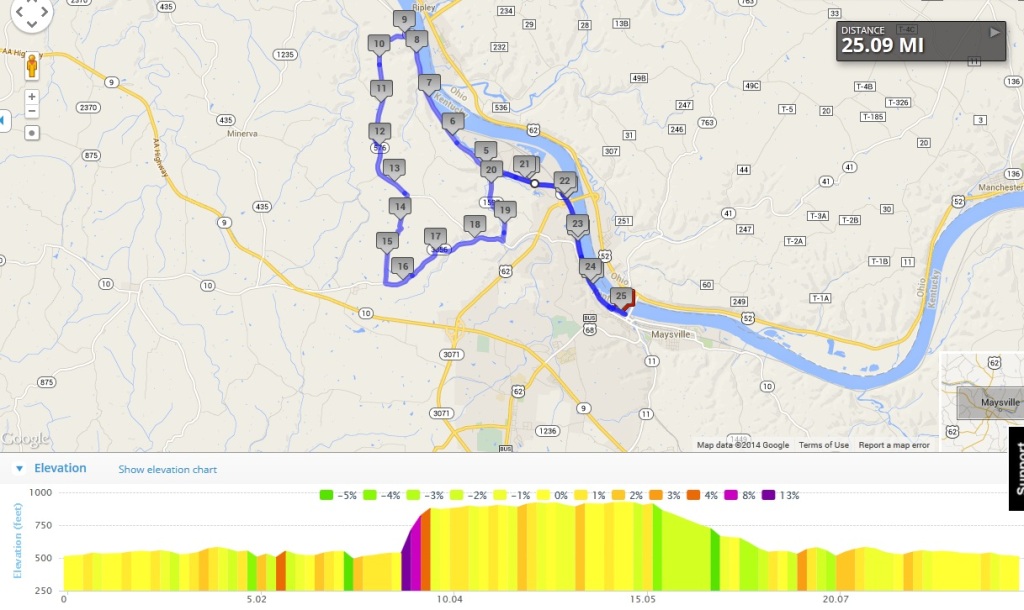 The distances for this race make it a cross between a Sprint and an Olympic. The swim is only half a mile, which is a Sprint distance; the bike is 25 miles, more along the lines of an Olympic distance; and then the run is a 5K (including a run up a flood wall), which is a typical Sprint distance. With only two triathlons left this season, I’m hoping to have a good race. Last year I managed to win my age group and finish 6th overall, so I’m shooting for similar results this year.

The race venue is fun, but the real reason I’ll drive two hours to Maysville is because my brother and his family live there. The plan is to drive up on Friday afternoon and get to spend some time with them Friday night. They have three boys and I plan on taking my middle son with me. So between all the boys, there will be some awesome Spiderman and Ninja Turtle action to enjoy!

Be sure and visit all of my sponsor’s websites. I sought out these companies because they provide great products and services