I was really excited to load up the truck and hit the road with my three year old son Adrian on Friday afternoon. We make the 140 mile trip from Louisville to Maysville in around three hours. We arrived a little after four o’clock and went down to pick up my race packet. We then headed straight over to my brother and sister-in-law’s house. I spent the rest of the afternoon playing with the kids. After some grilled chicken and veggies for dinner, I hit the sack early with Adrian a little after 8:00PM.

I woke up around 5:45AM, about half an hour before my alarm, but I had plenty of sleep and was ready to go. I ate my sweet potato with almond butter and after getting dressed and loading everything in my truck, I headed out the door around 6:45AM. The drive from my brother’s house to the race location was literally about 5 minutes, so I was the first one there and basically waited around for transition to open. I even took a picture of the river and posted it to Instagram with the comment of how calm and inviting it looked. 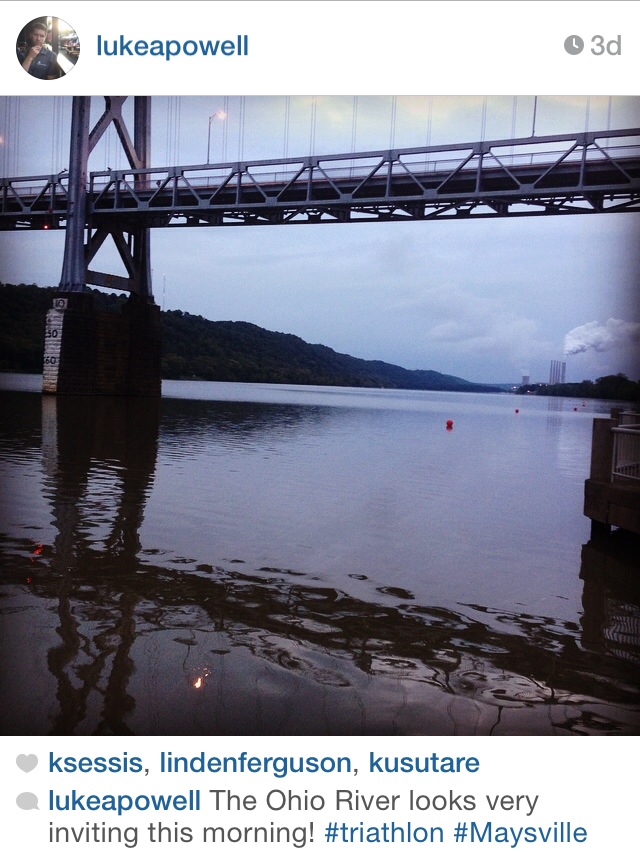 As you can see from the picture, the water was very smooth and you can see the buoys all the way down to the swim start (I shouldn’t have tempted the mighty beast). The air temperature was in the low 60’s and it felt great outside. The water temperature was announced at 74F, so I decided to go with the wetsuit. I had my transition area all set up and hopped on the bus to take us to the swim start.

The swim is all downstream, so we had to be driven up river. As we got off the bus and everyone was standing around waiting, I noticed that the wind was picking up and I was actually a little chilly. I remember hearing someone comment that it was colder now than when they started setting up in transition over an hour earlier. The wind continued to blow as we stepped on the barge that was going to take us out into the middle of the river. As I looked down at the water, I could see that the calm, smooth surface that I took a picture of earlier, now resembled the ocean. The water was very choppy and I could even see some white-caps. The wind was blowing right in our faces as we prepared to jump in. 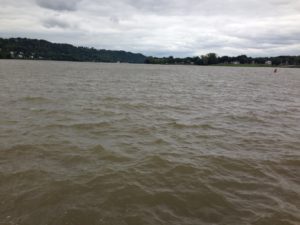 Here’s what the water looked like after the wind picked up.

The swim was downstream, but I could tell immediately that this wasn’t going to be an easy swim. With no warm-up, I expected to have some trouble finding my rhythm, but I was having bigger issues. I couldn’t find the small round buoys due to the chop and swales and I was taking in a lot of water every time I turned to take a breath. I had planned to try and stay with the faster swimmers, but after just a few minutes in, I stopped and looked around and swimmers were scattered everywhere. As I tried to sight and find buoys I decided to just make sure that I could see other swimmers around me. I figured that if I could see at least two other people, I couldn’t be that far off course. The half-mile swim felt more like a mile as I struggled to catch my breath. I would normally swim this distance in an all-out sprint, but I decided to just try and relax and find a comfortable pace since my breathing and stroke mechanics were all out of whack. I remembered seeing a few people raise their hand before the race when the USAT Official asked if there were any first timers. As I fought my way through the water, I thought about how terrified these people must be. I was never nervous (insert Pervis Ellison reference here), but I know that I would have probably had a panic attack if this had been my first open water experience! I finally made it to the dock and as I ran up the grass to transition I saw that my time was over 18 minutes! I knew that it was slow, but I was expecting 13 or 14 minutes…18 was insane!

14th Place out of the water 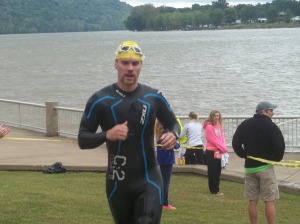 I got to T1 and saw that there were already a lot of bikes gone. I knew that I had my work cut out for me. Slow swims seem to be a theme for me this year. I have no doubt that the lack of time in the pool this season has directly translated to slow swim splits. I like playing catch-up on the bike, but being 3-4 minutes behind the leaders right out of the water makes it nearly impossible to contend for a podium spot.

I pulled my wetsuit off, put on my helmet and headed out of transition. Just to give you an idea as to how windy it was – when I threw my swim cap down on the ground next to my bike, it blew away. I soaking wet piece of rubber blew away like it was a feather!

I got my feet in my shoes and started to head northwest up the road that heads out of Maysville. I could see a few people up ahead and tried to settle in and catch them. My perceived exertion level was much higher than the watts I was putting out. I guess the effort on the swim had me a little winded (pun intended) starting the bike. It took me a good 10-15 minutes before I finally felt like my legs woke up. I passed a few people on the way out of town and then another two as we climbed “Big Hiney”. I tried to say seated as I climbed to keep from burning too many matches. I was forced to stand twice as I couldn’t get the pedals around fast enough. Once you reach the top of the hill, it’s several miles of rollers before the big descent. As usual, I took full advantage of gravity and pedal down the descents until I start spinning out. I passed a few more people heading back down toward the river and my legs felt pretty strong as a came off of the bike.

4th Place off the bike 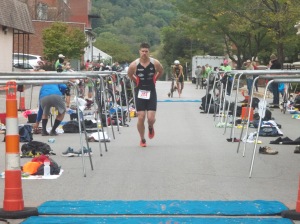 I dismounted and ran into T2. I racked my bike and sat down to slide my shoes on. I decided to go with no socks due the short run. I had baby powder on the inside of the shoes and they went on my bare feet pretty easy. I grabbed my race number belt and put it on as I ran out of T2. Since there was also a Sprint distance race and a Duathlon going on at the same time as my race, it was hard to tell how many people were out in front of me as I started the run. I just knew that I need to catch some guys and I couldn’t let anyone pass me.

The 5K run appears to be a simple out-and-back on paper. But what you don’t see is that at the turn-around, you come off of the paved road and run up steps to get to the top of the flood wall. The second half of the run is on grass along the top of the wall. To add in another factor, there was a strong head-wind as we headed back to the finish line. I knew that a few of the guys that I passed in the late stages of the bike would be close behind, so I just focused on keeping my cadence high and tried to hold my pace as steady as possible. I did sneak one peak back behind me when I reached to top of the steps and I didn’t see anyone very close. I managed to catch two people on the run, but as I passed I could tell from their race number that they were racing the Duathlon and not the Triathlon. There was another runner out ahead of me that I was gaining on, but never could run down. Turns out that he was sitting in 3rd place overall and beat me by 47 seconds. I gained over a minute and a half on him between the bike and the run, but I couldn’t overcome the huge hole I was in after the swim.

4th Place after the run 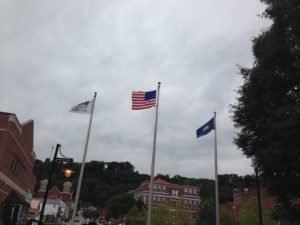 The flags show just how windy it was!

I was hoping for a overall podium spot, but considering how bad my swim was, I’m happy that I was able to rebound and get up to 4th. I still won my Age Group and took home a nice plaque. As they were announcing awards, I heard them say that this race was the Kentucky qualifier for the 2105 Best of the US Amateur Triathlon. I had heard of this race before, but didn’t know much about it. I was even more surprised when they announced the three qualifiers and I was one of them! Turns out that the overall winner is from Tennessee, so he cannot represent Kentucky in the race…so his spot rolled down to me. The race is next June in Saint Paul, Minnesota. I don’t know what my race calendar is going to look like for 2015, but it might be fun to be in a race that only has a few entrants from each state.

Thanks to my brother and his wife for letting Adrian and I stay the night with them, cook us dinner and take care of little man while I was getting things set up before the race. My parents also made the trip to Maysville for the race and stood out in the cold to cheer me on. It’s great to have such good family support and even better to have a successful race when they are there to witness it. 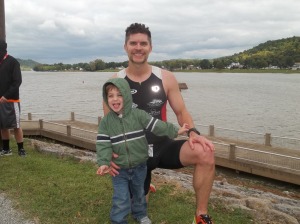 Yes, that is a Fu Manchu mustache. I rocked it with style!

I’ve got another race this coming Sunday and I’m really excited to share some big news regarding it. Look for a race preview later this week!