I’ve been involved with the Kids Center for Pediatric Therapies for for over 5 years now. Since the first time that I set foot in that place, I’ve been inspired and wanted to help. Something that has been on my radar for the last few years was doing a triathlon in tandem with a disabled athlete. It’s been discussed several times with the staff at the Kids Center and also with the race organizers at Headfirst Performance. Everyone was on board, but we couldn’t seem to track down all of the equipment (raft, bike trailer and running stroller) and had lots of questions regarding insurance and safety. We use the phrase “No need to reinvent the wheel” at work all the time. This phrase applied in this situation. What we really needed as someone that had done all of this before – enter Athlete’s In Tandem.

Athlete’s in Tandem is a non-profit organization based in Ft. Collins, Colorado. It was started in 2008 by Dennis Vanderheiden. Over the last six years, Dennis has helped pair up able-bodied athletes with people who are physically and mentally challenged. My communication with Dennis began several months ago and we had targeted the PT Plus Louisville Landsharks Triathlon as a race that I would do with a disabled athlete.

I like to have every last detail planned out and I was a little nervous leading up to race day as Dennis was the one doing all the planning and I basically just had to show up. Dennis came into Louisville a few days before the race and we met up so that I could practice swimming with the raft and make sure that the trailer fit on my bike. We had trouble finding a local pool that would let us practice, so we ended up heading down to the Ohio River. I learned that this wasn’t the first time that Dennis had been in the river. He was in Louisville back in 2007 for the inaugural Louisville Ironman!

The practice went well and I was confident that I would have no trouble swimming while pulling the raft. The bike trailer fit my tri-bike and it seemed like we had all of the details worked out. Dennis had lined up the local athlete’s ahead of time, so we were not able to work with the Kids Center this time around, but I managed to get Dennis to stop in there while he was in town and I hope that the ground-work has been laid for future races!

On race morning, I basically set up my transition area just as I would for a triathlon that I was doing solo. The bike trailer and running stroller were waiting outside of the transition area, so that I could get them on the way out. I wasn’t concerned about speed in this race, but I wanted to give my athlete the true experience of racing a triathlon – which includes quickly moving from one sport to the next.

I was paired up with Heidi. She is a woman that suffers from both physical and mental disabilities. She had raced in tandem as part of a half marathon in the past, but this would be her first experience with swimming or biking. I could tell that she was excited and I was ready to help give her something she was physically unable to do on her own.

We went down to the edge of Taylorsville Lake and after she put on her life jacket, Dennis and I helper her get into the inflatable raft that would be connected to me with a six foot chord. Dennis also had a disabled athlete that he was going to race with. I had been working on finding a bike for Dennis to use since he didn’t attempt to travel from Colorado with his own. But a day or two before the race, he was able to find someone, Clare Burkhart (a dominant mountain bike and cyclo-cross rider), to do the bike portion of the race with his athlete. So Dennis would swim, Clare would bike and then Dennis would finish out the relay with the run portion of the triathlon.

As the race started, I immediately tried to swim very far out to the left to avoid all of the other swimmers who would most likely take in inside track to the first buoy. The toughest part of swimming while pulling a raft is getting it started. Once the slack is out of the chord, you don’t feel much of a pull as long as you keep moving forward. The buoys for the out-and-back swim were on the right, so I tried to stay pretty far out to the left to keep from being in the way of other swimmers. I was also slightly concerned that someone would inadvertently swim between me and the raft, get tangled in the chord and possibly cause the raft to flip over. This was probably not a legitimate concern, but Heidi was my responsibility out there on the lake and keeping her safe was my number one priority. With about everyone third breath, I would rotate around far enough to catch a quick peek back to the raft to make sure everything was ok – as you can see me doing in the picture below. 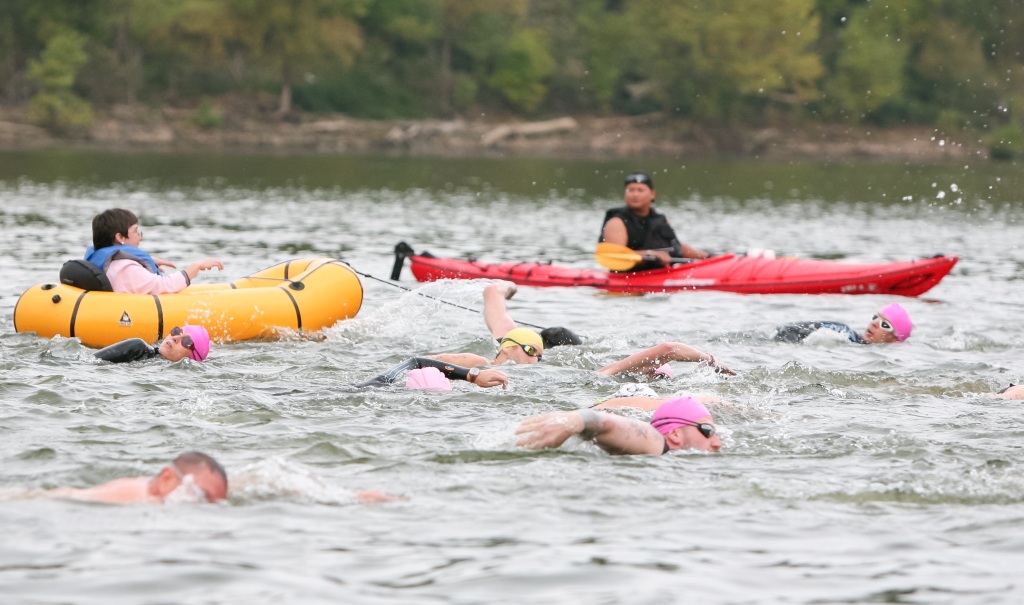 You can see me turning around to check on Heidi and the raft. Thanks to Jessica for the awesome picture!

I had a stop swimming a few times when someone cut in front of us, and getting the raft moving again was the hardest part. But overall, I felt pretty good during the half mile swim. I did look back a few times and saw Heidi wiping off her glasses after being splashed by someone swimming next to us. If someone was so inclined and didn’t mind swimming slow, I’m sure you could catch a sweet draft behind her little boat!

We made it to the boat ramp in just over 17 minutes and I pulled the raft out of the water. I helped Heidi out of the raft and was getting her into the stroller to take her up the hill to transition when Dennis appeared. He’s a much faster swimmer and had exited the water a few minutes ahead of us. He had already taken his athlete up to T1 and came back down to help us while Clare started on the bike portion. We made it up the ramp and I ran into transition while Dennis took Heidi up to get here situated in the bike trailer.

Heading out of T1

For anyone that has done a race at Taylorsville Lake, you know all about the hill leading out of transition. It’s a very steep climb that gets your heart rate ramped up very quickly. I thought that I might have to get off and walk the bike and trailer up the hill – but once I got going, I was able to stand up and power up the hill. We made it up the hill and started our 12 mile journey. I made a conscious effort not to push it too hard up the hills and found myself riding the brakes on the downhills because I wanted to make sure I was able to keep control of my bike and Heidi in her trailer. So despite me pushing a wattage (220W) that would normally yield an average speed of 20-22 mph, we ended up with with an average speed of 12.7 mph. My riding style was completely different. After downloading all of the data (like I always do), I noticed that my average cadence (69 rpm) was very low (normally in the mid 80’s) and my Variability Index of 1.18 was crazy high (it’s normally between 1.03 and 1.05). 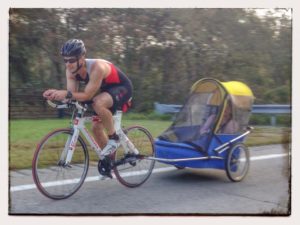 Heidi and I on the bike course. Thanks to Jennifer for the picture.

We were passed a lot on the bike, but I didn’t mind because we were having fun. We stopped at the turn-around and I made sure that the trailer was still connected well and that Heidi was doing good. I told her that I just swallowed a bug and she thought that was pretty gross! I also had to stop myself from blowing a snot rocket a few times on the way back. I didn’t think that my passenger would appreciate seeing me do it…or the possible mess that would end up on the screen covering the trailer! 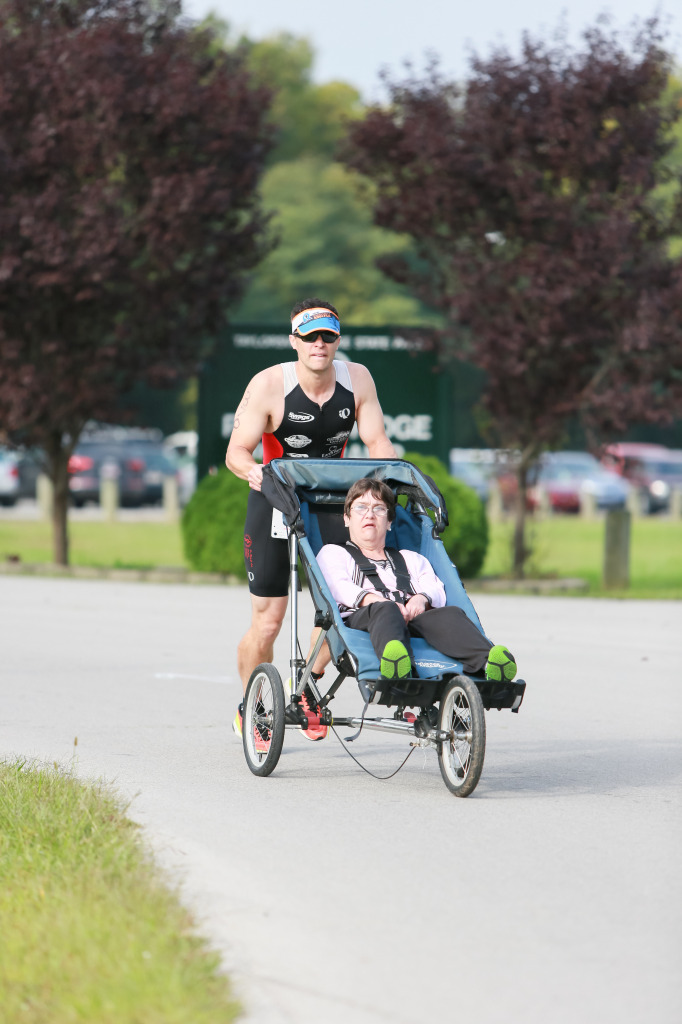 Heading out on the 5K run!

We had a lot of momentum coming back down the hill into transition and I had to squeeze my brakes hard to slow us down. We rolled into transition and I hopped off the bike. Dennis was there to get Heidi out of the trailer while I put my running shoes on and grabbed my hat. I helped Heidi get into the running stroller and off we went. I planned on running up the monster hill. About 30 feet in I changed my mind! We walked up the hill, but then I started to run once we got to the top and I ran the rest of the 3.1 miles. Heidi and I chatted back and forth a lot during the run and I tried to get her to talk some smack to other runners as we passed. I felt really good on the run and we passed a lot of people. Despite walking up the hill and stopping for about a minute or so at the turn-around for Heidi to get a drink of water, we still managed a time of 26:49, and ran the last mile in 7:07. 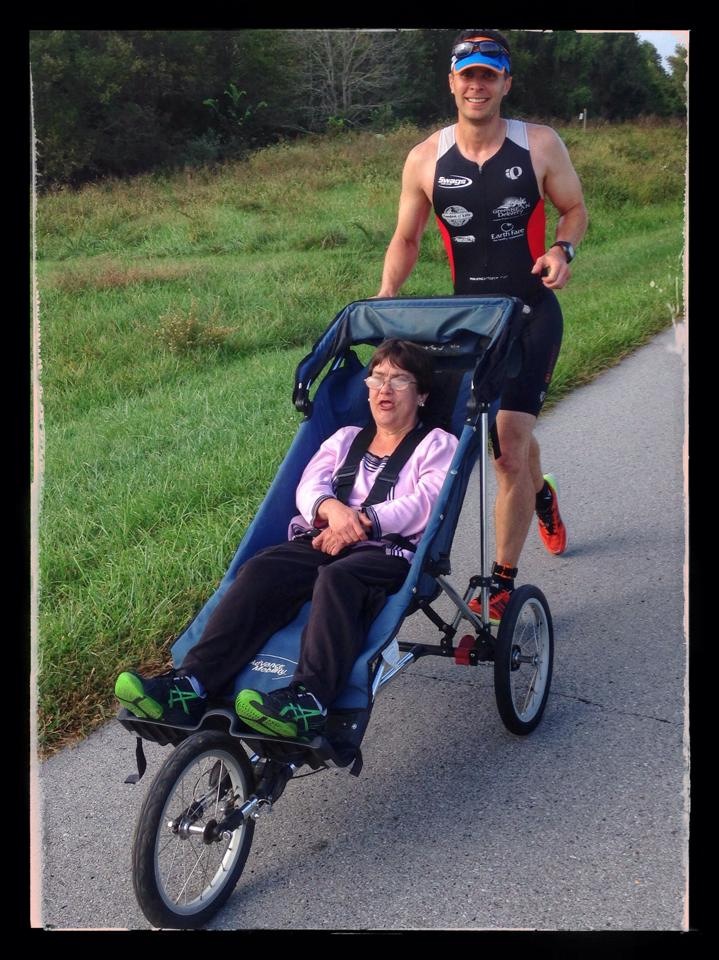 Cruising on the run.

We finished strong and it was an awesome feeling to push Heidi across the finish line and get her a medal and t-shirt. The spectators and all of the other triathletes were amazing. Everyone was very supportive and either offered some encouraging words or a thumbs-up. Heidi couldn’t stay long, but we did get to chat a little bit about the race before her ride showed up. I told her that I was sure that her view was better on the run than the bike since she didn’t have to stare at my backside the whole time. Her response? “I didn’t mind.”. That gives you a little glimpse into her personality. 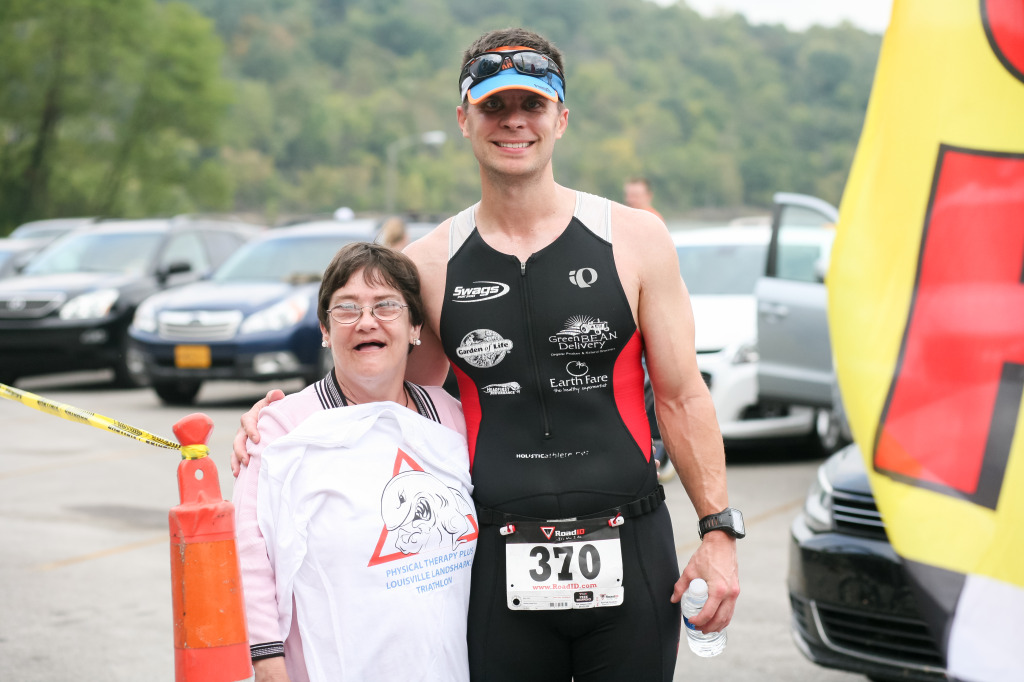 Heidi and I after the race

I really wish that she would have been able to stay for the awards ceremony as we somehow managed to finish third in my age group out of five participants!

Overall the experience was everything that I thought it would be and more. I want to especially thank Dennis and Athlete’s In Tandem as well as everyone at Headfirst Performance for being so cooperative and helpful in making this happen. I can’t wait to do it again!