I’ve always wanted to race in the Age Group National Championship, and I’ve actually qualified for it the last three years. In 2012 the race was in Connecticut and was just too far to drive. Last year it was close enough to drive (Milwaukee), but I was doing Ironman Louisville at the end of August and I didn’t want to do two races that close together. So when Ironman was over last year and I started to think about my 2014 season, I decided that I would like to make Nationals my “A” race of the season. The problem was, up to that point, I had not yet qualified for the race. So I found a race last September near Columbus, Ohio that I thought I could use as a qualifier. Despite the many adventures that the trip held (read about it here), I accomplished my goal and qualified for the 2014 Nationals in Milwaukee.

So fast-forward 10 months and here we are, three days away from the race. After a few months of non-focused riding and running (barely any swimming), I had several races in the spring of this year. In fact, I think I was racing too much. So I used the last 9 weeks leading up to this race to focus on training. I laid out a very detailed plan (big surprise) and followed it almost without exception. My diet and recovery regimen became even more focused as well. As a result, I saw improvements in all three disciplines. A look at my Performance Management Chart from Training Peaks shows that things were slowly progressing earlier this year, but once I stopped racing so much and focused on training, my fitness (blue line) improved. It has dropped slightly in the last week to ten days because I dialed back on the training volume, but more importantly, my fatigue (pink line) has lowered while my form/freshness (yellow line) has risen. The yellow line can also thought of as fitness (blue) minus fatigue (pink). The goal is to have the yellow line above the pink line on race day…which I will. 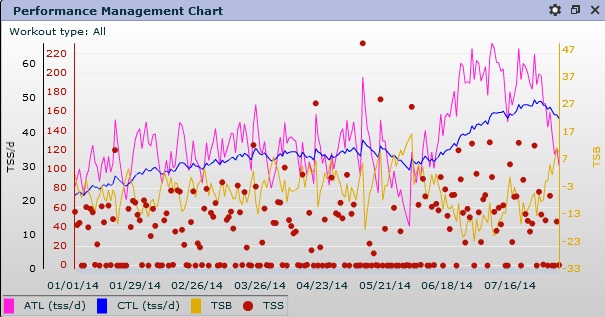 As for my specific goals for this race, I’m going to go out and race my race. I have no illusions of placing high enough to qualify for the World Championship, but I would like to turn out an Olympic Distance PR. My best races at this distance have yielded times in the 2:25-2:30 range, so I’ll be happy with anything under 2 hours and 25 minutes…2:24:35 would be a PR.

This week has been anything but a normal “race week” for me. My family and I have spent the week moving everything we own into a new house and I’m fighting the early stages of a cold. So by the time I’ve gone to bed each night this week, I’m totally exhausted from carrying boxes, assembling beds and installing appliances! I’m dousing myself in Essential Oils several times a day and drinking my herbs from Meridian Acupuncture. So with some extra sleep the next few nights, I expect to wake up Saturday morning full of energy and feeling great!