Several years ago I was chatting with a guy at the gym (called Gold’s Gym at the time, I think it’s LA Fitness now). I told him that I did triathlons and he asked if I was doing the National Championships. At the time, this seemed ridiculous to me. I had only been in the sport about two years and I didn’t even know how one would make it to the Championship, but I knew that I wasn’t even close to getting there. At that moment, I remember setting a goal to get to that race one day. Fast forward a few years and I was excited to receive an email from USAT stating that I had qualified for the 2012 Nationals. It was a big moment for me, but unfortunately, I knew that I wasn’t going to be able to make the trip to Vermont for the race. Fortunately, I was able to qualify again in 2013 and 2014. So finally this year, my schedule allowed me to register and make it to the race.

We booked a hotel and put the race on the calendar over 6 months ago. Little did I know at the time that the race would fall right in the middle of a week where we were moving everything we own from one house to another. By the time we loaded up the truck with the family and started on the 411 mile (8+ hour) road trip from Louisville to Milwaukee, I was exhausted. We got in Thursday night and immediately ran into issues at the hotel. We had adjoining rooms with my parents (we always take help on these race trips), and as we were settling in to get the kids to bed, Jessica noticed that the room was a little warm. I checked the thermostat and saw that it was 78F. I walked over to inspect the unit and saw that the coil was a solid block of ice! I knew that there was no way for them to fix the unit that night. So as I called down to the front desk to let them know, Jessica went ahead and started to pack everything back up. We ended up moving next door to the adjoining room and my parents were relocated down the hall. They were moved a couple of more times before finally getting back into the room next door to us. 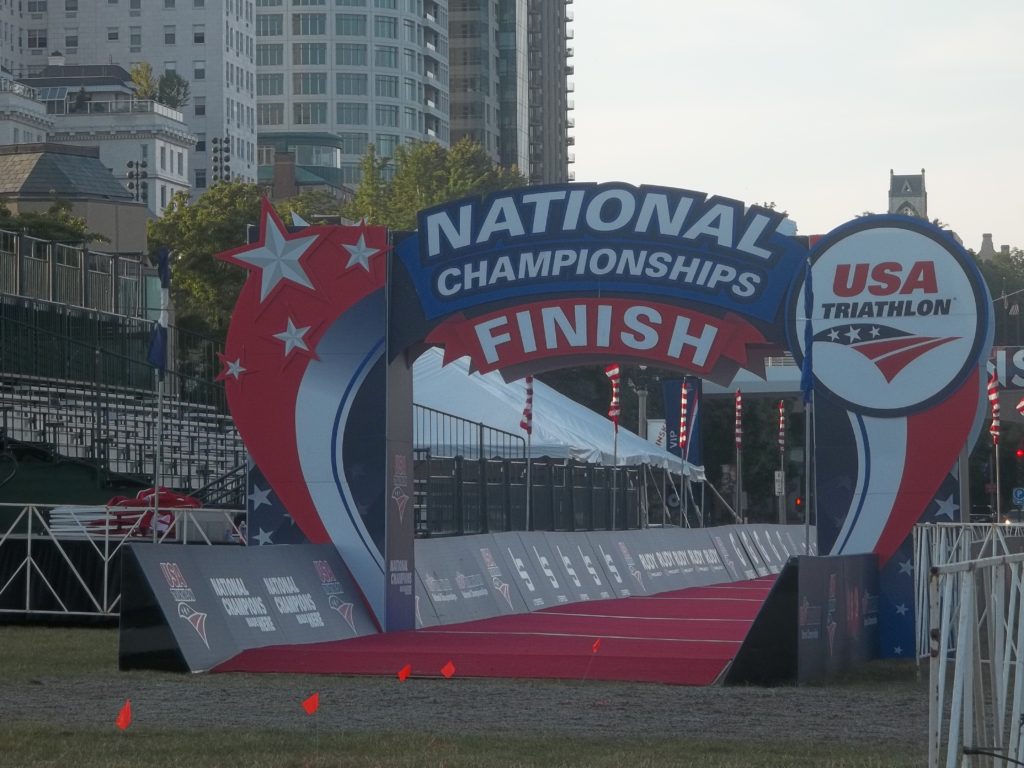 Friday morning my Dad and I walked the mile and a quarter form the hotel to the race venue. I picked up my race packet, did the practice swim and got my bike checked in to transition. That afternoon we drove around Milwaukee trying to find a playground for the kids to expend a little bit of energy. All I will say is that I wish Google maps had a feature telling you what neighborhoods were safe. After driving to three different parks, we finally found one in what looked like a neighborhood where we were not likely to get solicited for drugs or sex!

Race morning started off at 4:30am. I ate my sweet potato with almond butter and got dressed in the hotel bathroom so that I didn’t wake anyone else. I was ready to go and started to walk down to transition around 5:15am. I was in the first wave (7:30am), and transition closed at 7:20am. It only took me about 20 minutes to walk from the hotel, so I had more than enough time to get everything set up and chat with several athletes that were close to me on the bike racks. I even found the Kentucky state flag hanging on the fence around transition and got a picture snapped with it. I have to admit that it was pretty cool to be one of only a hand-full of athletes there representing the state. 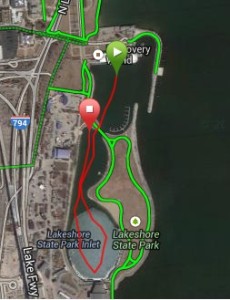 The 1500 meter (0.93 miles) swim took place in a cove right off of Lake Michigan. The water temp was in the low 70s, so everyone was stuffed in their wetsuits. My wave had over 200 people in it, so needless to say, it was a pretty hectic swim start. I was kicked in the forehead right off the bat and ended up slowing down a little to find some clean water. I went a little off course (see map to the left) after going under the bridge. I was sighting off of the wrong buoy for about 100 meters or so (I actually swam a total of 1580 meters). After we made the final right turn and started heading north back toward transition the sun was right on the horizon. This is why I wear tinted goggles in open water races! Without them I would have been blinded. I could have changed to breathing to the left, but I’m more comfortable and faster (don’t know why) when I breathe to the right. I was hoping for a swim time in the 25-26 minute range, but I really never know what my time is going to be until I exit the water.

I pulled myself up on the ramp and make the run into transition. The run was plenty long enough to get my wetsuit down around my waist and I was able to get it the rest of the way off pretty quickly once I arrived at my bike. I put my helmet on, grabbed my bike and ran out of transition. This was about as fast as I can do T1, so no regrets here.

They had transition set up in a way that all of the people in my age group were all pretty close to one another. So I could see how many bikes were already gone (most of them) by the time I made it there. I knew that I had some work to do on the bike. I have been putting in some serious bike workouts on the trainer over the last two months, so I was ready to see what I could do on the road. I kept an eye on my watch to keep my power under control early on. The course is two out and backs, so I was able to see how far ahead the leaders were…and I was amazed! Some of these guys are crazy fast. I was pushing it pretty hard and was losing ground. Looking back at my Garmin data, I’m pleased with several things. First of all, my average cadence was 86 rpm. I’ve been trying to work on pedaling faster while maintaining goal power. I think this will help me on the run in future races. For comparison, my cadence in my last two Olympic Distance races were 78 and 79 – so bumping that closer to 90 rpm is significant. I was also pleased with a Variability Index of only 1.03. A VI this low means that I was pretty steady with my power output for the entire 40K. My Nominal Power ended up being 230 Watts. I was shooting for 240, so I can’t say that I’m happy with this result, but I know that it was all I had on this particular day. I took in half of a gel around the 30 minute mark on the bike and the other half around 55 minutes. I chased each of them with about half of my water bottle. This was the only nutrition or water that I took in on the bike.

As I rolled back into transition, I felt like I had a lot left in the tank for the 10K run. I racked my bike, took my helmet off, slipped on socks and shoes and grabbed by visor and race number belt as I ran out of transition. I saw the family as I started on the run and made sure that the kids saw me and knew that I saw them. I can’t tell you how great it is to have a family that supports this hobby of mine. It’s an awesome feeling – I’m very grateful! 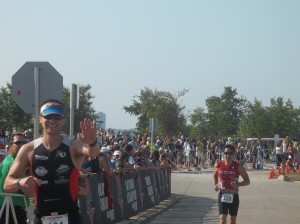 The run course is right along Lake Michigan and would have been an awesome place to run during training. But it’s hard to appreciate the beauty of nature when you are in pain! I felt pretty strong over the first few miles and was holding a pace in the 7:20’s. I felt good about this pace and planned on holding it through mile 4. The plan was then to drop it down to 7:00 miles or under for the last 2 miles. The problem was that during mile 4, holding the 7:20 pace started to get more difficult. Mile 4 took me 7:40 and I could tell that my level of perceived exertion and my heart rate were ramping up quickly. It was gut-check time. I thought about all of the early morning track workouts and hill repeats that I had done. They were all for this moment. I thought about the studies that I had read about how you can override your brain when it tells you to slow down. I blocked out that inner voice telling me to ease up. I focused on keeping my cadence high (averaged 88 steps per minute for the entire 10K – very close to my goal of 90) and tried to not let the pace slip any further. I took in water at the aid stations and sipped same Gatorade at the last few. Mile 5 was in 7:33. Not what I wanted, but it felt like a 6:30 mile! I was on the home stretch and everything was hurting. I saw a guy up ahead of me and knew that he was in my age group. I set a goal to catch him before the finish. I found an extra gear and caught him with a few hundred meters to go. I ran down the finish shoot with everything I had left.

My goal for the race was to set a PR, which was anything under 2:24:36. I looked at my watch with about 1/2 a mile to go and knew that it was going to be close. Since I didn’t stop my watch as soon as I crossed the line, I was wasn’t sure of my official time until about a half hour after the race. I’m happy to say that I set a PR by a whole 26 seconds (man, that was close)!

I knew coming into this race that competing against the best in the country would be tough. I had no goals as far as where I wanted to finish in my age group, but I simply wanted to race the best race that I could – which I did. Carrying boxes up and down steps for three days leading up to the race isn’t the ideal way to taper, but that’s life. Sometimes things come up that you can’t control. I had a great experience and USAT put on a hell of a race! This will be one that I will always remember. 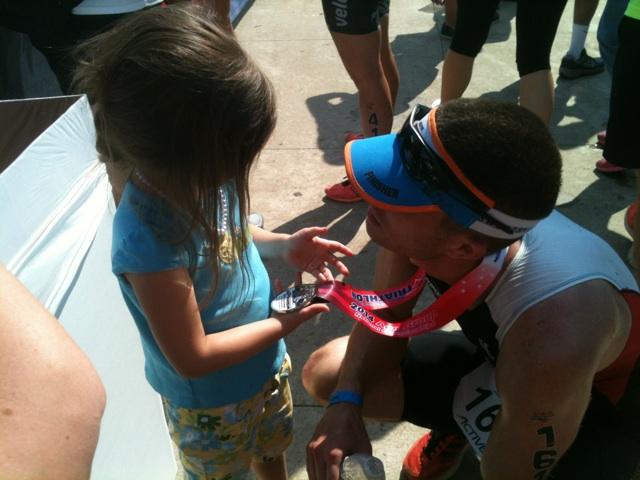 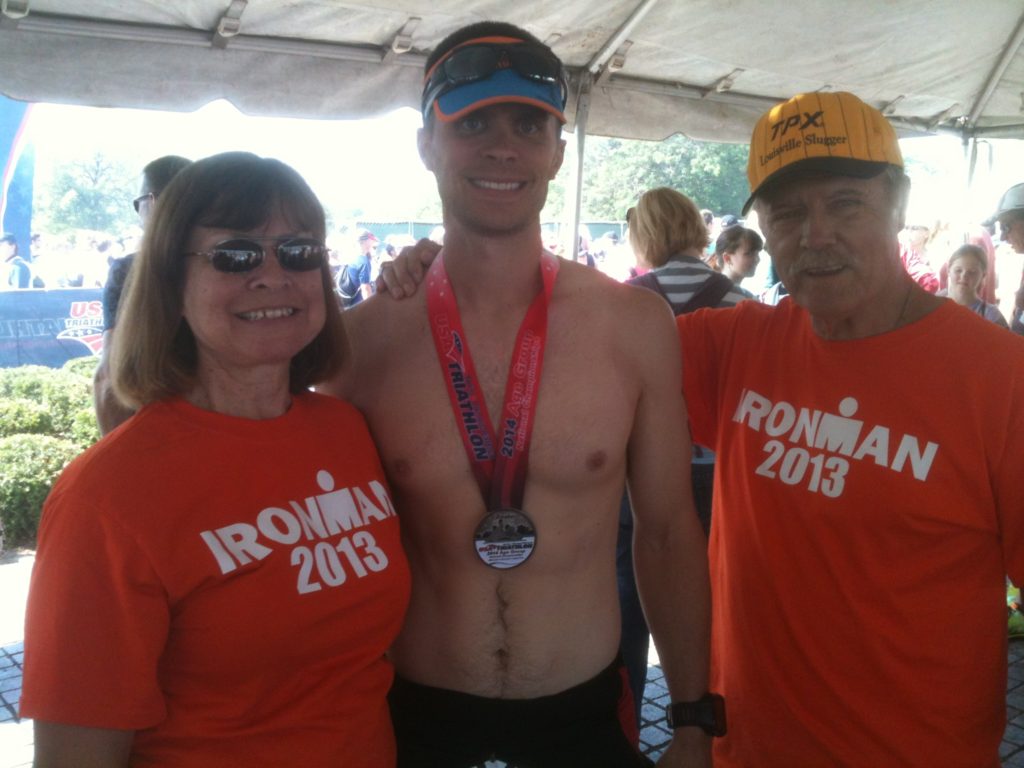