As strange as it sounds, I was very disappointed as I pulled away from Clear Creek Park yesterday. On the surface, it wouldn’t make much sense to feel disappointment after a race where I finished 1st in my Age Group and 5th Overall. But a small mechanical issue with my bike had my thoughts going to the many “what if” scenarios that could have played out.

Due to the cold (high 30’s) temperatures, the race organizers decided to run the race in reverse order. So we ran first, then biked, and finished up with the swim. I really think that this format is better for me as I’m not the strongest runner and I thrive on chasing people down on the bike. 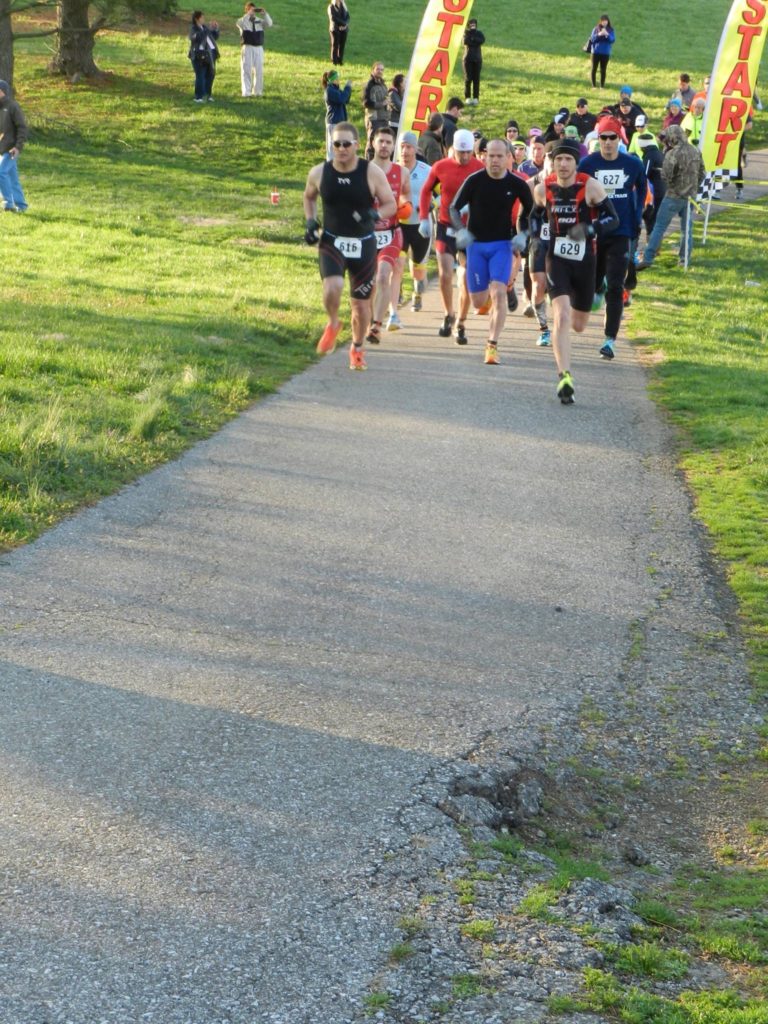 The start of the race. I’m in the red with the bright orange gloves. – photo courtesy of Amber Korte

I did the 5K run in 21:01.6 (6:45 min/mile pace) and came into T1 in 8th place overall. My transitions are always fast and this race was no exception as I was in and out of T1 in 29.4 seconds, faster than anyone else. My quick transition allowed me to pass one person and I came out of T1 in 7th place. My T1 was quick, but not without a critical error. As I was taking my bike off of the rack, I hit my right shiftier leaver. I didn’t think anything about it, but as I mounted my bike to start the 12 mile ride, the first rotation of the pedal caused the chain to come completely off of the chain ring.

I had to stop and get off of my bike to get the chain back on. This is not a hard task, but one that takes a few seconds. The problem was them compounded by the fact that I had my shoes clipped in to my pedals already. This is done to make transitions faster, but the shoes are held parallel with the ground by rubber bands. Once the rubber bands break (which mine had done on that first pedal rotation), the shoes then rotate freely around the pedal and will hit the ground if you do not have your feet in them.

So once I had my chain back on, I had to un-clip each shoe and put them on my feet. All of this is being done while people are exiting T1 and riding past me as a stand in the parking lot. Based on the results, it looks like I dropped to 12th place while I was standing still for one minute and eighteen seconds (according to my Garmin data).

Once I got on my bike and moving, I was very frustrated and knew that my shot of finishing in the top three was all but gone. In a race this short, every second counts and you just can’t afford to stand still for over a minute.

I began to pick off riders ahead of me one at a time. The 12 mile bike consists of two loops and I pushed it hard the whole way. My official bike split was 31:10.7, but if you take off the time I was stopped, it was closer to 29:50, which would have been one of the top 4-5 bike splits.

As I rolled into T2, I was sitting in 5th place overall, so I made up seven spots on the bike. Without the dropped chain, I would have likely been in third place coming out of T2 heading to the pool. Of course, it’s impossible to know how things would have played out. Maybe me passing someone on the bike that I didn’t would have motivated them to push harder and I wouldn’t have been able to get to third place or hold on to it. I love racing and the dynamic between athlete’s is impossible to predict.

As it played out, I entered the water in 5th place with two guys less than 30 seconds ahead of me. Those two caught second place and I could see the three of them swimming in a row a lane ahead of me as we snaked through the 25 yard pool to get a total of 400 yards. I was gaining ground, but not fast enough. I never could quite catch up with them and ended up finishing in 5th place, only 21 seconds behind second place and just 15 seconds behind fourth. 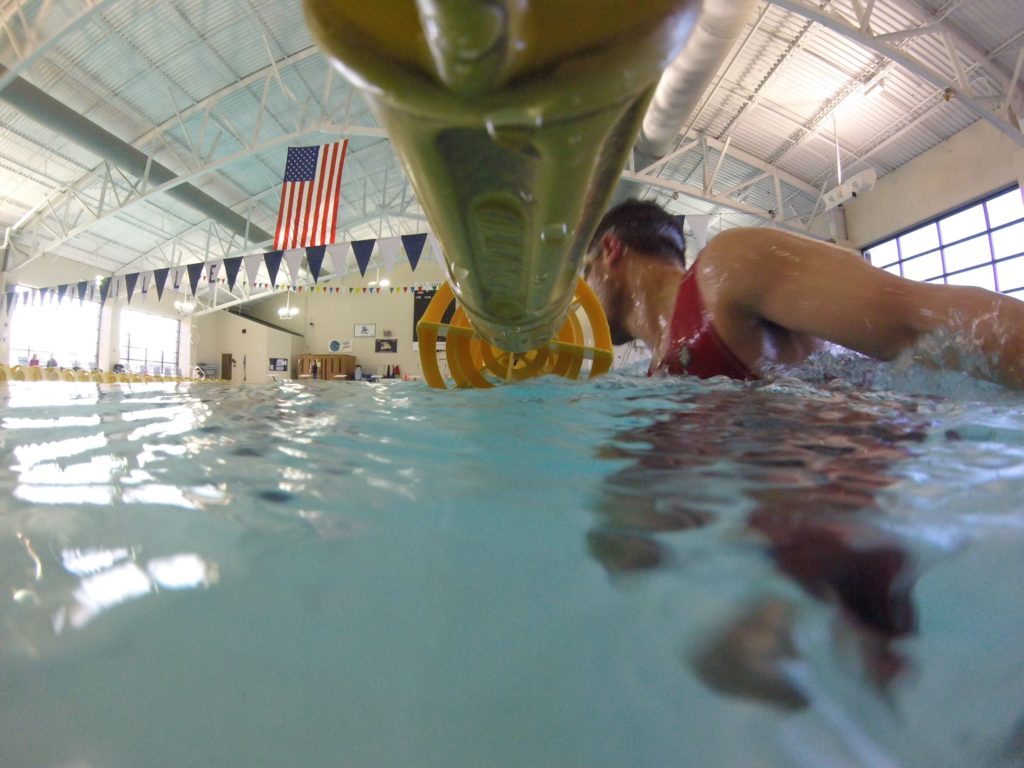 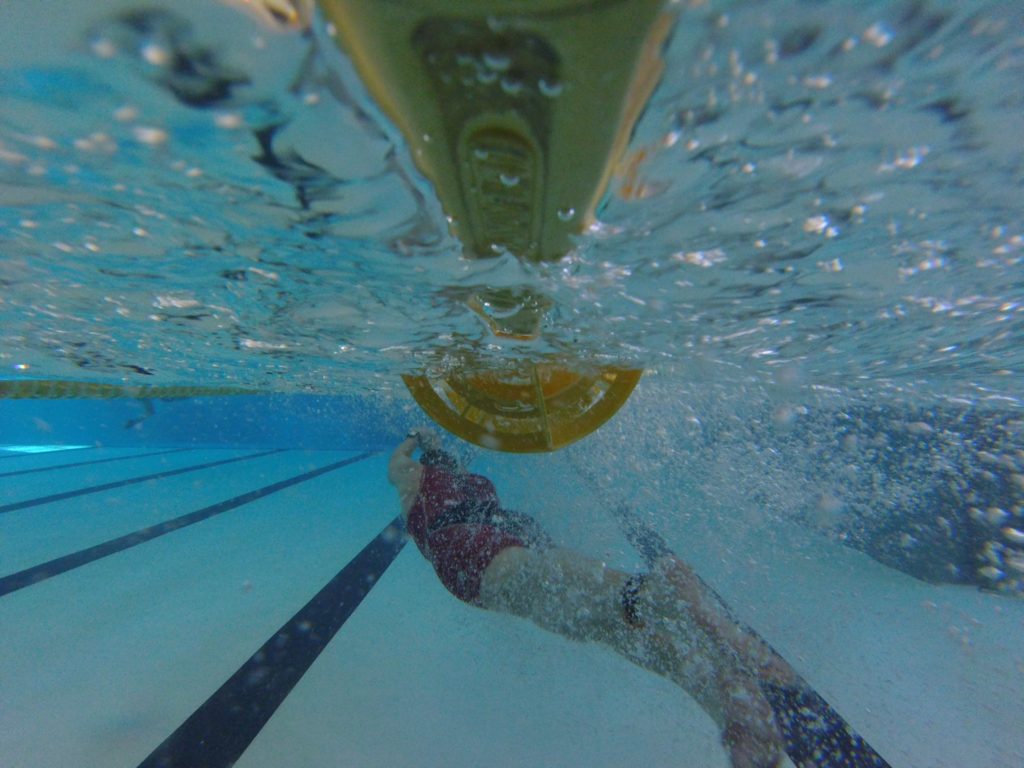 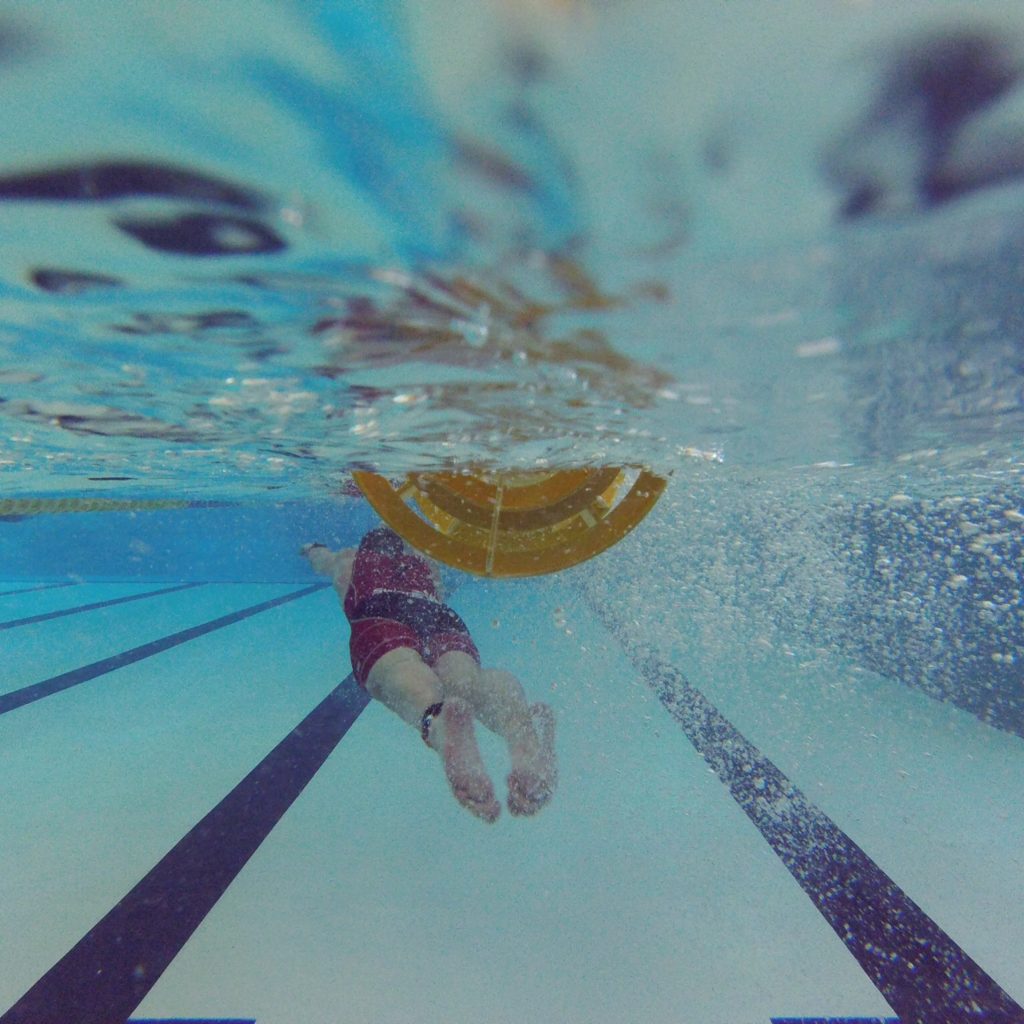 I understand that some people that read this might think that it’s ridiculous for me to be disappointed with a top five finish and an Age Group win. The fact is, I’m a very competitive person. A recently took a Predictive Index personality test and I scored as a very high “A”. This indicates that my competitive nature drives me to always want to win. If I know that I had the chance to do better than I did, it’s not easy for me to “move on” and “get over it”. As I type this, it’s been almost 30 hours since the race ended, and I’m still going over the “what if” scenarios.

All I can do at this point is get back to training and hope that I have a chance to redeem myself next time out.