This was my third consecutive year racing the Revolution 3 Triathlon in Knoxville, Tennessee. It’s become a staple in my race calendar for several reasons. First of all, Rev3 does a fantastic job a catering to racers that bring their families with them. Second of all, a Rev3 race has a “big-race” atmosphere and they always do a good job with logistics. Plus, who doesn’t like loading up three kids under that age of 5 and driving 250 miles??

My sister-in-law Becca graciously agreed to accompany us again this year. Having an extra adult around on these family trips makes a huge difference, especially while the actual race is going on! So we all packed in the Tahoe and headed out of town on Friday afternoon. After stopping once for gas and then again to eat dinner, we finally rolled into Knoxville a little after 6:00pm. We checked into our rooms and were in for the night. We really lucked out as not only did Rev3 have their normal activities for kids (bouncy house, balance bike obstacle course and sign making station), but there was also a Reading Festival going on right outside the hotel at the World’s Fair Park. So we spent Saturday morning walking around the festival doing arts and crafts and meeting random book and TV characters. It was a blast and the kids had a great time…we even went back 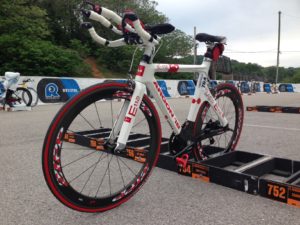 for more in the afternoon – after bike check-in/kids nap time. Saturday evening we met up with some other Louisville Landsharks (our local triathlon club) for dinner. Knoxville has a pretty cool market district just a few blocks from the race site called Market Square. There are lots of restaurants, shops and street performers (including my children!).

Race morning started off at 5:15am. I ate my sweet potato and got dressed in the hotel bathroom so that I didn’t wake anyone else. I was ready to go and started to walk down to transition around 6:00am. I had heard conflicting stories on when transition was going to close, everywhere from 6:50 to 7:45…so I didn’t want to take any chances. Turns out it didn’t close until 7:50am, but I like to be early to races anyway, so I didn’t mind the extra time to set up transition.

After getting everything set up, I walked the 1/2 mile or so down the waterfront to the swim start. Once there, I ran into some more guys from Louisville and we chatted as we waited for our swim wave to start. The triathlon community is a lot of fun to be part of. No matter what your age or speed, all triathletes share a common bond and we all enjoy sharing race stories and experiences with one another. While the sport can get competitive and it actually IS a race, that never seems to stop people from sharing tips and wishing their fellow competitors good luck. The 1500 meter (0.93 miles) swim takes place in the Tennessee River. You start upstream from the spot where you ultimately end up, making the majority of the swim “with” the current. Much like the races here in the Ohio River, they are able to control the current somewhat – so it’s really not much of a factor. The water temperature was 68F (a full 10 degrees warmer than last year!), so it was a wetsuit legal race.

I have zero confidence in my swim right now. I haven’t devoted the time needed this season to improve. Not only am I not improving, I’ve actually regressed. I plan on getting back into a swim group once I’m no longer taking my daughter to school in the mornings. Anyway, I started the swim and after fighting the punches and kicks off for the first 50 or so meters, I found some clean water. My goggles were slightly fogged up and I was having trouble seeing the buoys. So I had a decision to make. Stop and clean off my goggles, or keep going and struggle to sight the line. After going for several more minutes without really being able to see where I was going, I decided to stop. I got my goggles cleaned off pretty quickly and was back on track without losing too much time. As you can see from my Garmin data map above, I was all over the place at the beginning of the race. Once I stopped, I swam a much straighter line. The discouraging part is that I really felt like I was swimming pretty fast. Once I got out of the water a looked at my watch, reality kicked in. I really need to drop about 3-4 minutes off of this swim time in these Olympic Distance races. Being 2-3 minutes behind the top guys in my age group to start the race is never a good thing.

9th in my Age Group out of the water

I pulled myself up on the dock and ran up the ramp, through the UT Rowing Team boathouse, across the street and into transtion. I got my wetsuit down around my waist as I ran and was able to get it the rest of the way off pretty quickly once I arrived at my bike. I put my helmet on, grabbed my bike and ran out of transition. This was about as fast as I can do T1, so no regrets here.

7th in my Age Group starting the bike

They had transition set up in a way that all of the people doing the same race as me, in my age group, were all pretty close to one another. So I could see how many bikes were already gone (a lot of them) by the time I made it there. I knew that I had some work to do on the bike. With the weather being perfect (low 50’s and no rain), I was ready to crush the bike. I haven’t been able to train much outside this year, so my hill climbing is a little sub-par. This was evident throughout this very hilly course (see profile below). I was consistently passed on the uphills and then would fly past people on the descents. I have become very confident with my bike handling over the years and I have no problem going as fast as possible down the hills. I even continue to pedal until I run out of gear, while most of the people I pass are just coasting. Looking back at my Garmin data, it looks like I topped out at 41 mph going down one of the big daddy hills. I took in a gel at around the 20 minute mark on the bike and chased it will almost my full bottle of water. This was the only nutrition or water that I took in on the bike.

5th in my Age Group off the bike

As I rolled back into transition, I knew that I had put in a strong ride. I racked my bike, took my helmet off, slipped on socks and shoes and grabbed by visor and race number belt as I ran out to start the 10K run. I was frustrated by how long it took me to get my socks on, but I still don’t want to risk having a blister or other issue that might pop up while running 6.2 miles without socks on.

5th in my Age Group starting the run

The run starts and ends with some rolling hills. I knew right out of the gate that it was going to be a struggle. I had read last years race report the night before the race, so I knew that I had started off slow and found some speed in the middle miles. After running the first two miles this year in 7:22 and 7:18, I was hoping to find some energy and get miles 3 and 4 closer to 7 minute pace…it didn’t happen. I was really struggling at this point and I was the one getting passed instead of the one doing the passing. Mile three was 7:32. I tried some Gatorade at the next aid station and felt a slight boost from the sugar, running the fourth mile in 7:23. But that was all that I had. The last two miles were brutal and I was passed by my buddy Shawn for fifth place in our age group with about a mile to go. I tried to stay with him, but he kept slipping a little further away. Miles five and six were 7:44 and 7:46. I don’t know if my legs were not fully recovered from the two races at TriFest the weekend before, or if the lack of hill training on the bike blew my legs up, but either way, my run split was two minutes slower this year than last.

6th in my Age Group after the run

I crossed the finish line and was happy to be done. I usually feel completely exhausted for about 10 minutes following a race and then get some energy back and think that maybe I could have gone harder. However, based on how sore my quads and hamstrings are today (2 days after the race), I’d say that I definitely left it all out there.

Great race and good time with the family! Kudos to Rev3 for putting on another great race!