My 2104 race season is over (technically it has been for a few months), but it’s now the time of year when I like to look back and review my races. My training for 2015 won’t start up sometime after the beginning of the year, so I use this time of year to analyze this past year’s results before planning my training for next year. This allows me to focus on my weaknesses and build on my strengths as I decide what to do in the offseason.

No matter how many hard workouts you do, you can never duplicate the total experience of a race. I’ve pushed myself pretty hard in training, but never to the point of exhaustion like I’ve done in a race. There are of course lots of variables in races (course, elevation, weather, other participants, etc.), but there are still several things that can be examined and learned from each one.

I log every workout and race I do into an online program called Training Peaks. One of the useful tools that Training Peaks provides is called a Performance Management Chart (PMC). I’ve discussed this chart several times in my blog, but this time I’m going to look at my whole season and then two smaller segments of the chart to see what I can learn.

To make things simple, I’ll just look at my PMC from January 1st until today:

Clink on image to enlarge

When taking this broad-view of the year, you can see two distinct peaks of my CTL (blue line). This line represents my overall fitness. The goal would be to have this at it’s highest heading into your “A” races of the year. My CTL line peaked at 56.0 on July 26th and at 51.7 on September 17th. These coincide with the Age Group National Championship (8/9) and The Maysville Tri (9/13). I’ll look at each of those peaks more closely, but before moving away from this broad-view, I think it’s important to note that my fitness level remained pretty constant from February through June. Without a big race early in the season, I think I wasted a lot of time waiting for June to come around – when I could increase my intensity and ramp up my fitness leading into Nationals. I was putting in some hard efforts in training and racing during these months, but with the exception of my highest Training Stress Score of the year (230.8) on May 10th, during Rev3 Knoxville, I really did little to challenge myself in the Spring months. A more ideal PMC would look like mine did in 2013 (see image below), where I was able to apply a more steady increase to my fitness throughout the year, leading up to Ironman Louisville in August.

With a race like Ironman looming in the distance, I think I was mentally able to put in some harder efforts in the Spring last year. But since my “A” race of 2014 was only an Olympic Distance race, I think I thought that I could get away with doing less early on and still get to my peak fitness in time. As you can see from my 2013 chart, my fatigue (pink line) was pretty high most of the season, but with all of the recovery work (eating clean, strength work, foam rolling, Chinese herbs, acupuncture, etc.), I can get away with training in this state. It’s also worth noting that my CTL peak in 2013 was 78.5 versus only 56.0 in 2014. So I was nowhere near as fit this year.

If I take a closer look at the weeks leading up the the AG Nationals, I can learn several things about my training that can help me make adjustments for my 2015 season. 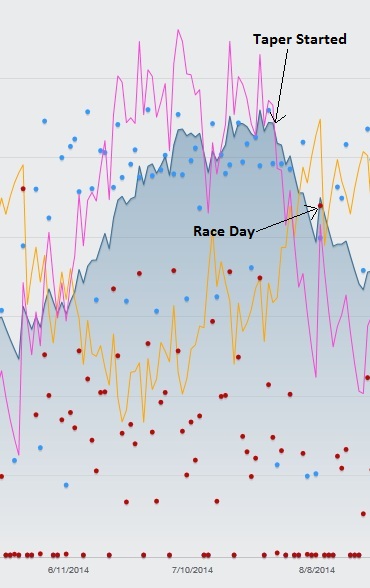 First of all, it’s clear that my taper was way too long. Leading up to the race, I did some research on the “recommended” taper for an Olympic Distance race and I decided that mine should be 10 days. As you can tell from the dramatic drop off in my fitness (blue line) in the days before the race, I did not need to taper this long. My freshness (yellow line) went to +3.2 after just two days of tapering. Anything above zero is considered good. I also see that my fatigue (pink line) dropped over 21 points in just 5 days. While I felt rested on race day, I have to admit that I thought I was a little too refreshed and couldn’t find that extra gear to push it during the race. This is clear in the fact that my TSS for this race was only 157.1 – a score lower than what I was able to achieve during the three other Olympic Distance races earlier in the year – all of which were done with a taper of just a few days. So to make a long story short, I peaked too early. I should have continued to push the intensity of my training right up until 2-3 days before my race, which would have coincided nicely with the time that my family and I left Louisville to make the drive to Milwaukee.

The other thing that I can gather from this close-up look at my PMC is that once I made an effort to push myself in my workouts, my fitness climbed quickly. With my running and riding, I mixed in speed work with some power sets and then some longer intervals at race pace. I also started getting in the pool at least twice a week and doing some hard workouts. I noticed improvement in my pace on the ran and my power on the bike over the two-month build up to this race. The formula was working, I just needed to continue it for another week before starting my taper.

A closer look at the second peak of the season.

The other peak of the season occurred between the Maysville Triathlon and the Landsharks Triathlon. After the short break I took following Nationals, I was able to get in some good workouts and with just four weeks of work, I got my CTL/fitness line back up to nearly the level it was before my Nationals taper. While none of the races shown in this segment were “A” races for me, I didn’t want to go into the Maysville race flat, so I made an effort to build my fitness back up and then hold it through the Landsharks Tri, which I did in tandem with a Special Needs Athlete. The back-to-back-to-back runs of The Bourbon Chase resulted in a spike in my fitness, but that’s all pretty much gone at this point since I decided to take a break from running after that weekend adventure. I’ve been strictly riding my bike on the trainer since October 11th and I don’t plan on running again until after Thanksgiving. I’m taking this time off from running to let my body recover and heal up before I start building back up for next season.

So after looking at my 2014 race season through my Performance Management Chart, I have learned a few things that I can take with me going forward. This is only one way to review a season and it is by no means the best way. I had a lot of fun doing only shorter (Sprint and Olympic) distance races this year and I made a lot of great memories with my family along the way. Sure, I could have done a few things different and maybe placed a little higher, but all in all, I’m happy with the year and I’m excited to see what 2015 holds.

For those of you that are wondering…I’m on Day 15 of eating no sugar (natural or artificial) and it’s going great. It has taken some work to find those hidden forms of sugar that are literally everywhere, but my wife and I are still going strong. There are only 10 days until Thanksgiving, so we are on the home stretch!