If you read this blog, there’s a good chance that you ride a bike outdoors once in a while. I see people breaking the law on their bikes nearly every day. Some are people riding a bike around downtown for transportation. Some are just cruising through the neighborhood to enjoy the fresh air and get some exercise. Others are on their way-too expensive bikes in spandex training for a race (I fall into this category most of the time!). The bottom line is that all of these people must follow the same laws when they are riding. So what exactly ARE the laws? You may think you know, but I bet that there are some laws that you are breaking every time you ride.

I started with the state laws by looking up the Kentucky Revised Statutes (KRS) that pertain to bicyclists. There is also Title 601 of the Kentucky Administrative Regulations (KAR) and also the local ordinances for each city or town. Kentucky on-road bicycle laws are contained specifically in Chapter 189 under Title XVI of KRS developed by the State legislature. First of all, it’s important to note that the law recognizes bicyclists as drivers of vehicles. KRS 189 defines bicycles as vehicles and, as such, grants them the right to use Kentucky roadways.

KRS 189.231 states that all vehicles (including bikes) SHALL obey traffic controls applicable thereto, meaning stops lights and stop signs for example. Some states have an “Idaho” law, which allows bicyclists to treat a stop sign as a yield sign, and a red light as a stop sign. It first became law in Idaho (thus the name) in 1982, but has not yet been adopted in many other states. Kentucky has NOT adopted this law, so you must come to a complete stop at all stop signs and wait for a green light at an intersection before proceeding.

KRS 189.300 requires that all vehicles (including bikes) travel on the right side of the road. I see this one violated all the time. Always travel in the same direction as cars and DON’T go the wrong way down a one way street on your bike!

KRS 189.300 also requires that slower vehicles (including bikes) must keep to the right as far as possible to allow faster vehicles free passage. At least three feet of space is recommended for motor vehicles when passing bicyclists and the passing vehicles should move back into the right lane only when well clear of the bicyclist.

KRS 189.330 regulates movements at intersections, such as first to arrive is first to leave and on simultaneous arrivals, the vehicle on the right has first right of way. Bicyclists should always make eye contact with drivers before proceeding through an intersection. If you are turning left and you cannot safely get over to the left side of the lane or to the turning lane (if there is one), they bicyclists should move to the far right and walk their bike across the intersection as a pedestrian. 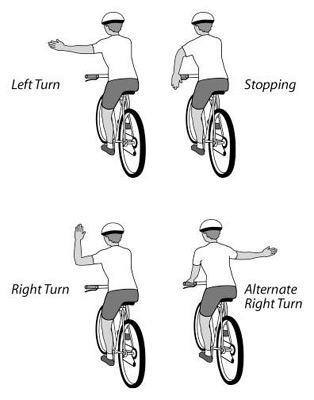 KRS 189.380 requires hand signals within about 100 feet of the bicyclist’s turn.

•Left arm crooked up at the elbow for a right turn.

•Left arm down with palm backward for slow or stop.

Section 1 of KAR 601 requires lights when riding at night (or in dark conditions). Lights must cast a beam 50 feet ahead and be visible from 500 feet ahead.

Section 2 requires a rear red reflector and, if riding at night, a red light visible from 500 feet.

Section 3, while not requiring a bell or whistle, does require the rider to sound an audible warning when passing pedestrians or other bicyclists. How many of us are doing this when we ride? I’m not. I’ll have to work on my “beep, beep” or “on your left” calls!

Sidewalk Riding – this is one that I see violated more than any other law. Sidewalks are controlled by local ordinances, so your specific city/town laws apply. Typically, sidewalk riding is prohibited in downtown Business Districts because of high numbers of pedestrians and doorway entrances. Wrong way sidewalk riding is also prohibited – where bicyclists are riding on the sidewalk on the side opposite the direction of traffic – is the cause of high numbers of vehicle/bicycle collisions. In the city of Louisville , it is ILLEGAL for anyone over the age of 11 to operate a bicycle on any sidewalk in the Metro area. The law also states that no one of ANY age shall ride a bike on a sidewalk downtown. 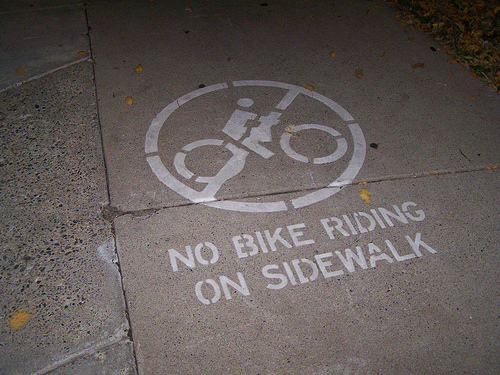 Section 9 details where bikes can be operated in a manor different than a motor vehicle. It allows for you to ride on the shoulder of the road, and to NOT ride in the designated bike lane if it is blocked or unsafe. It also allows for you to ride two abreast on a single lane. That being said, look back at KRS 189.300 that requires slower vehicles to allow faster ones to pass. If you are riding two abreast and a car is behind you, the law states that you must allow them to pass. So be smart and get in single file or even pull of the road to let cars go by. It’s for your safety and it’s the law.

Some other sections require some more common sense things, like brakes, a seat, at least one hand on the handlebars, and no one riding on the bike that does not have their own seat (like your bud standing on the pegs or sitting on he handlebars). You also cannot ride a bike while under the influence of alcohol or other substances – so don’t take your bike to the bar thinking you will be cool to ride it home after pounding shots all night! It also states that a helmet is NOT required (unless you are under 18 and riding in a City of Louisville Metro Park), but as someone who continues to pay higher health insurance premiums because people are stupid…please, everyone wear a helmet!

So you might think that there’s no chance a police officer would “pull you over” on your bike for violating a traffic law? While it DOES happen, it’s unlikely. Keep in mind that the penalty for violating any of the state laws outline above is anywhere between $20 and $500 per violation. So the threat of a fine probably isn’t enough to deter you from breaking the law, but your safety and life should be!

So be safe out there and don’t be afraid to tell your fellow cyclists about some of these laws. There are lots of drivers that hate cyclists and part of the reason is that we do not follow the laws. If you expect to be treated as a vehicle on the road, you must follow the same rules as the guy in the F-350 Dually or the Toyota Prius that just flipped you off!

Senate Bill 80 , currently under review by the Senate Transportation Committee, would amend the current revised statute that dictates how motor vehicles are to overtake cyclists on state highways. The 3-foot cushion between a vehicle and a bicycle has now become a widespread standard requirement across the country, with nearly half of U.S. states enacting the requirement, according to data compiled by the National Conference of State Legislatures.

One Response to “What You Might Not Know About Biking”