Every time I find myself setting up my transition area before a triathlon, I’m reminded as to why I’ve devoted so much time and energy to the sport over the last five and half years. That combination of excitement and nerves is one that isn’t easy to come by in day-to-day life. I’m so happy that I found this sport and the good friends and experiences that have come along with it!

This race was the third and final of the Headfirst Performance Shelbyville Triathlon Series at Clear Creek Park. The first was a run-swim only, the second was a swim-bike-run, but the bike was only 12 miles. This final race consisted of the same 400 yard swim, but with a 16 mile bike and then the 5K run. I was hoping to come out with a podium in my Age Group and a top 10 Overall finish. With the weather warming up, I figured that the race would be pretty competitive.

The swim was self-seeded again and this time I decided to be a little more realistic with myself and line up in the 6:30-6:45 per 400 group rather than the 6:00 group that I was in for the second race. My swim is slow right now, but until the kids are out of school and I have some more flexibility with my morning schedule, I just can’t get to the pool more than once a week. I’m about 10 seconds per 100 yards slower than I was at my fastest, and I’d like to get that speed back before Ironman Louisville in October.

I was about 10th or 11th in the line and jumped in the pool with one thought in mind…swim hard and try to keep my form from falling apart. I managed to accomplish the first, but not the second. I ran out of gas about 300 yards in and I felt my flailing as I struggled to hold pace over the last two laps. I was passed once and tried to hold on to his feet, but that only lasted about 25 yards. I exited the pool in exactly the same time as race number two. So I guess it’s good that I’m not regressing? Right??

I knew that transitions played a big role in my Age Group win and Top 5 finish in Race #2, so I was going to try and get an advantage there again during this race. I ran down the hill from the pool to the parking lot. I got to my bike rack and tossed my goggles to the ground. All I had to do was put on my bike helmet and run my bike out of T1. I fiddled with the helmet strap for a few seconds, but overall, it was a successful swim to bike transition.

With the bike leg being so short, there’s no need to pace yourself. It’s all about trying to maintain the highest output you have for the duration. I knew that if I was going to have any chance at a podium spot, it was going to be because of a strong bike. The course is a lollipop style route with an out and back and a loop at the end of the “stick”. I could see some of the faster swimmers out ahead of me and I starting reeling them in one at a time. I passed 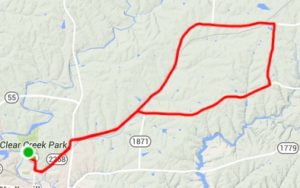 a few guys and then played a little cat and mouse game with a guy that I knew would smoke me on the run. I didn’t look at my speed or power at all during the ride and since I didn’t take any water, it was easy to ride in aero position the whole time and push my legs to their limit. I rolled into T2 pretty happy with my effort, but I knew that there were still a few guys up a head of me that I didn’t catch. Turns out this is my fastest bike split ever on this course (this was my fourth time doing this race). 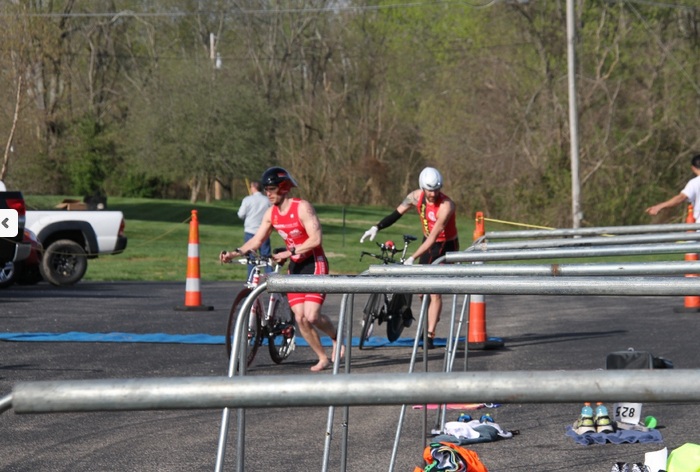 With a flying dismount and only having to take my helmet off and put on my running shoes, I expected a fast T2. I thought that it was…until I saw the race results. I’m not sure how I could have gone through any faster, but based on the fact that 12 people managed to do it faster than I did, I clearly have some room for improvement! Two guys that came in after me on the bike were out of T2 before I was…I’m not used to seeing that happen. 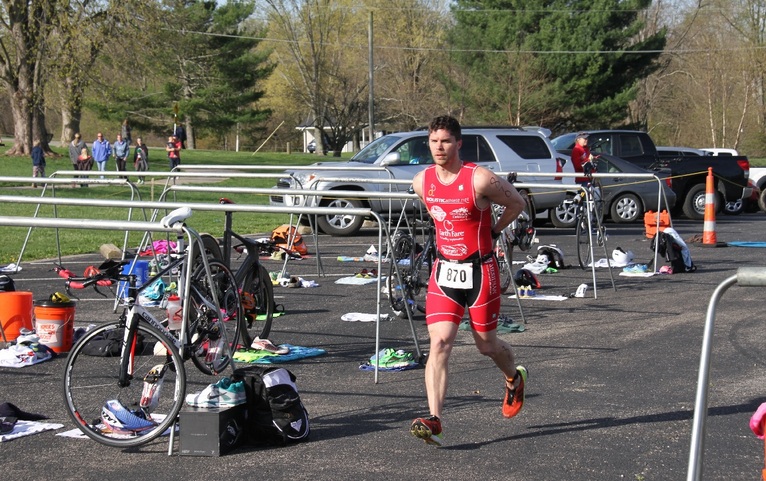 Existing T2, trying to get my race number belt on

The 5K out-and-back run is the exact same course as the second race in the series. It starts up a slight incline, then it has a flat section, a short downhill and then another little climb before the turn-around. The steep hill on the way back is always tough. I knew that I had left a lot out on the road during the bike, but I also knew that it was only 3.1 miles of running and I can suffer through that in my sleep. My pace didn’t start out as slow as the second race, but unlike last time, I never found that increase in speed. As I started the run, I could see everyone out ahead of me and I thought maybe I had a chance to catch one or two of them. Unfortunately, I never found the extra gear and despite pushing it as hard as I could, I lost ground to just about everyone. I ended up 20 seconds slower than my run time from race number two.

I knew that my best time in this race was somewhere around one hour and fourteen minutes, so I was happy to see that I was under 1:12 as I crossed the finish line. I though that it might be good enough to win my age group again, but once I went over and looked at the results, I was a little disappointed to see that I came in 3rd. Turns out that 2nd place was only 8 seconds ahead of me and 1st place was only 40 seconds better. I hate to lose a race when it’s that close, and if we had all started at the same time, it would have made for an exciting finish for sure! I raced as hard as I could, so I’m not sure if I had another 8 seconds, much less 40 seconds in me, but sometimes competition brings out some the inner warrior that you didn’t know was hiding in there! 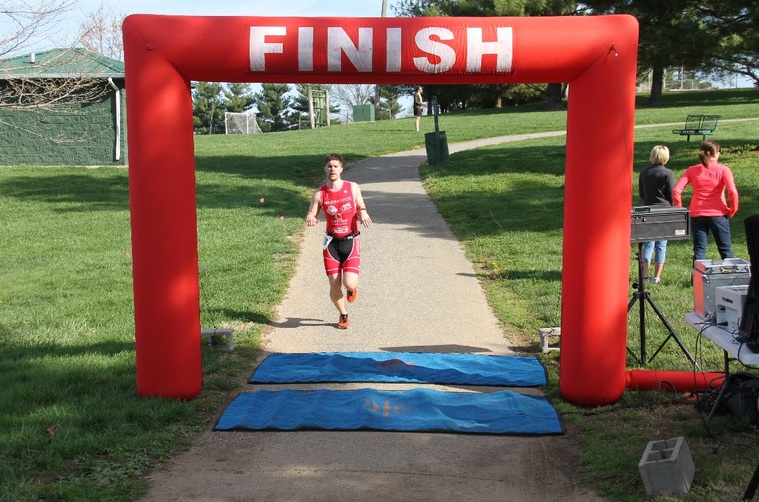