In Part 1 of my Metabolic Efficiency Test (MET) review, I gave some background on the test and how it is used. In this post, I’m going to tell you why I wanted to have this test done so bad that I asked for it as a birthday present (yes, I’m a geek). I will also describe how the test was done and my thoughts on the experience. The final part of this series, Part 3, I will look at my test results and determine how I can use the information gathered.

I’ve been eating a clean diet for several years now. It was actually January 2011 when my wife and I decided to rid out lives of all processed food. My food journey has come a long way since then, but that was the start. Over the last year or so, I’ve made and effort to eat more healthy fats. I not necessarily on a “high fat/low carb” diet, but I do look for good fat sources at every meal in order to try and teach my body to burn fat more efficiently. As I mentioned in Part I, it is much easier to teach your body to become metabolically efficient through your diet than it is through exercise. I addition to the changes in my diet, this past winter I did all of my runs at a low heart rate…in my aerobic heart rate zone with no fuel. These slow runs on an empty stomach are also a good way to force your body to use stored fat as fuel.

So after these changes, I was curious to see how well I burn fat. I also wanted to see how many calories I burn while exercising at different intensities. You can find lots people that will tell you that you need 300-500 calories per hour while exercising, but was that true for me? The MET would tell me exactly how many calories of fat and carbohydrates I was burning and how many I actually need to replace. This information is very valuable when doing a long-course race such as Ironman.

So on to the test. A few days before the test, I was asked to fill out some forms. One is a consent (typical) and the other was a patient profile. I was asked to answer questions about my training and racing as well as what my running paces were for aerobic, tempo and threshold runs. There was also a section to list what my typical diet consists of. These are pretty simple forms and are used to help the Specialists at FitnessRx determine how to set up the test and then how to help you achieve your goals.

Leading up to test morning, I was required to fast for 12 hours. That meant nothing other than water. According to Dannielle and Ashli at FitnessRx, this fasting is the hardest part for most people. But fortunately for me, I already fast for 12-13 hours every day anyway (from the time I finish dinner until I eat breakfast), so showing up fasted was not a problem.

I arrived at FitnessRx about 15 minutes prior to my appointment. While we waited on my professional photographer to arrive, Ashli spend time talking to me about the test and verifying the run paces that I had filled in on the patient profile form. She did a great job telling me about everything that was going to take place and what I could expect. She explained what she was going during the test and even told me why certain things were needed. When she told me that I would need to wear a mouthpiece, I was a little nervous. Going all the way back to my days of playing football as a kid, I’ve always hated having a mouthpiece in. I have a very sensitive gag reflex and I would often choke if I didn’t focus on breathing through my nose. That was going to be a problem for this test as the only way to get accurate data is to clamp your nose shut. To my surprise, the mouthpiece used for the MET wasn’t that bad. After just a few minutes, I felt comfortable with it and didn’t even notice it much once the intensity started to ramp up. 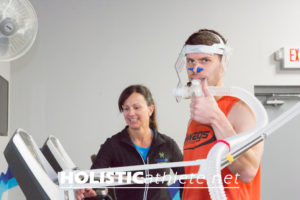 Once I had the headgear on, Dannielle was ready to get the treadmill going

The mouthpiece is connected to a hose that runs down to the testing machine. The machine captures all of the CO2 and O2 that is exhaled as you exercise. Carbon Dioxide (CO2) is a by-product of the cellular metabolic processes. Most of the CO2 given off by the body comes in the form of cellular respiration. The machine measures the ratio of CO2 production to O2 consumption to come up with what is called the Respiratory Exchange Ratio (RER). As blood travels through the cells, oxygen (O2) is released from the cells and is picked up by the muscle tissue. The muscle tissues then create CO2. This rate of O2 consumption and CO2 production changes based on what the cells are using for fuel. This An RER closer to 0.70 suggest that primarily fats are being used for the production of energy, whereas a RER closer to 1.0 indicates that carbohydrates are the primary source of fuel. I went into more details on how the body uses oxygen in a previous post that you can find here.

So once I had the headgear on, they started the treadmill out at a walking pace (15:00 min/mile) at 1% incline. The 1% incline is done to simulate outdoor running. After five minutes of walking, which was very boring, the fun started! Based on the paces that I indicated on my Patient Profile form, we started to increase the speed on the treadmill up to a slow jog. For me, this was a 8:57 min/mile pace. After five minutes at this pace, Ashli ramped up the speed by increments of 0.3 mph every five minutes. The data is collected only during the final two minutes of each segment. I also had my heart rate monitor strap on and my Garmin sitting on the test stand so she could record my heart rate during each segment.

Prior to increasing the speed each time, Ashli would ask me what my perceived effort was. I was cruising along pretty effortlessly for a while. SportsCenter was on the TV mounted to the wall in front of me, so I was just alternating between watching baseball highlights and watching the timer on the treadmill count up. We moved up to 8:27 min/mile pace, then 8:13. Next it was 7:54 min/mile, then 7:36. We were 30 minutes in and I was still feeling good. My perceived effort was only around a 5 out of 10. 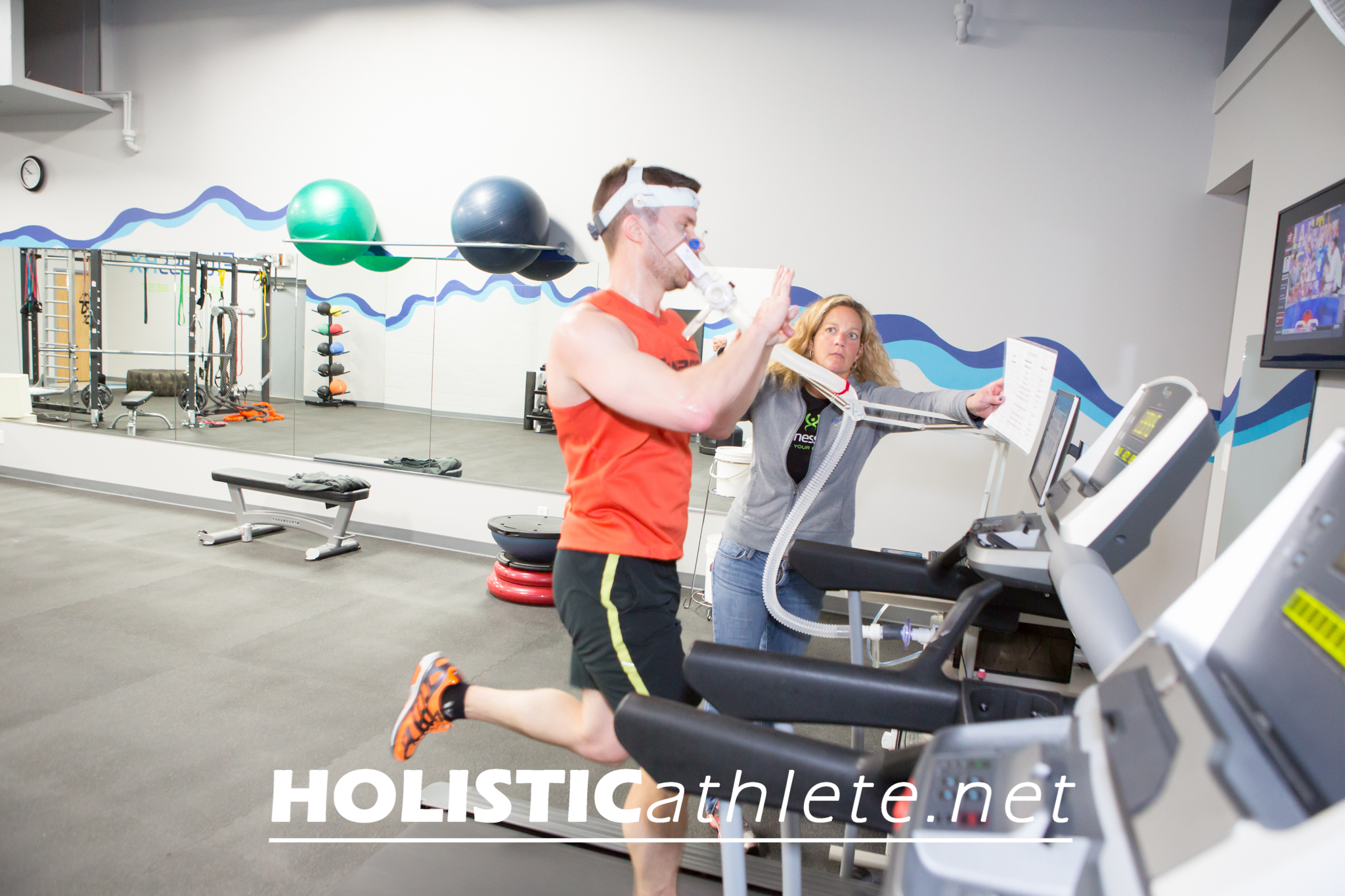 Here I am letting Ashli know what my perceived effort was.

I wasn’t sure of the exact pace because the treadmill was displaying miles per hour. I was going some math in my head and I figured out that a speed of 8.0 mph is equal to 7:30 pace. So I knew that I was a little above that. At the end of this five minute segment, my effort felt like a 6 out of 10. The next segment was at a 7:19 pace. During the five minutes at this pace is where I started to feel my breathing change a little. The mouthpiece and clamped nose made this pace seem harder than it is when I’m out on the road. I was looking down at my heart rate monitor and I knew that it was a few beats higher than it normally is for the paces I was running. 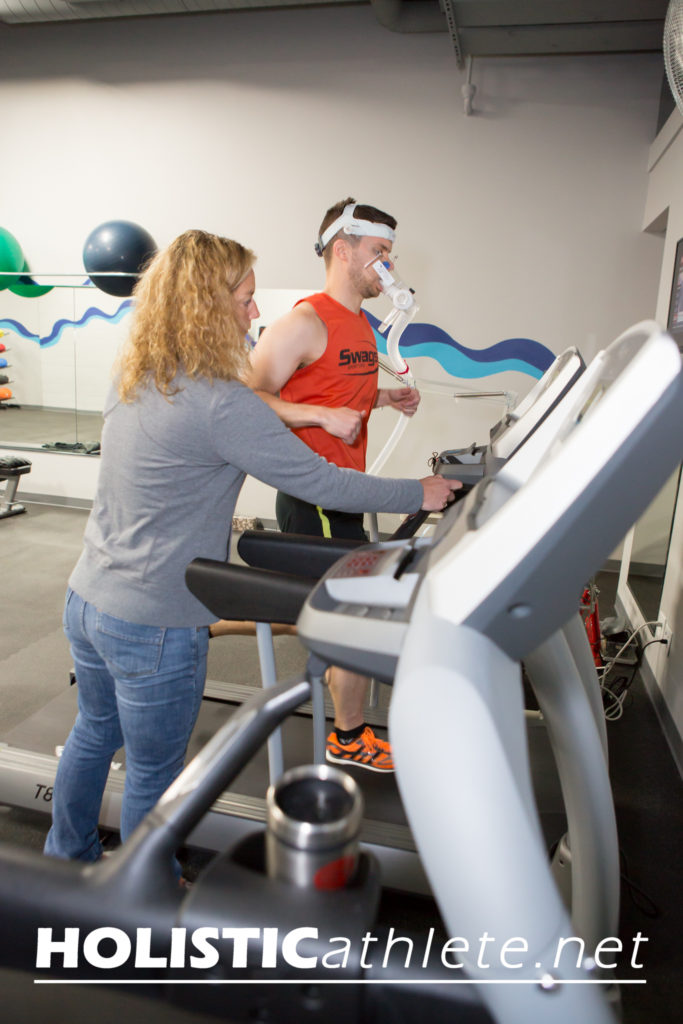 Ashli increasing the speed on the treadmill…let’s make this painful!

Ashli kicked it up to 7:04 min/mile pace and I started to slip back on the treadmill. I had to increase my cadence a little bit to keep from being tossed off the back. It was during this segment that I started to sweat. I had to reach up and around the headgear to try and wipe sweat from my forehead. I also started to feel some slobber drip out from the mouthpiece…I’m sure I looked like a wreck. My effort felt like an 8 out of 10 as this segment ended. As the pace went up to 6:49 min/mile I was really breathing hard. It was similar to the feeling I get when running intervals on the track…nearly an all-out effort. I knew that I was going to struggle to get through five minutes at this pace and there was no way I was going to be able to do five more at the next increment (6:35 pace). So as we came to the end of the five minutes (45 minutes into the test), I gave Ashli the kill sign and she began to ramp the speed back down. We went back down to walking pace to see how long it would take me to get back into “fat-burning” mode. Once we reached that point, the test was over. I tossed all of my sweaty, saliva-filled gear into a bucked and found a place to sit down. 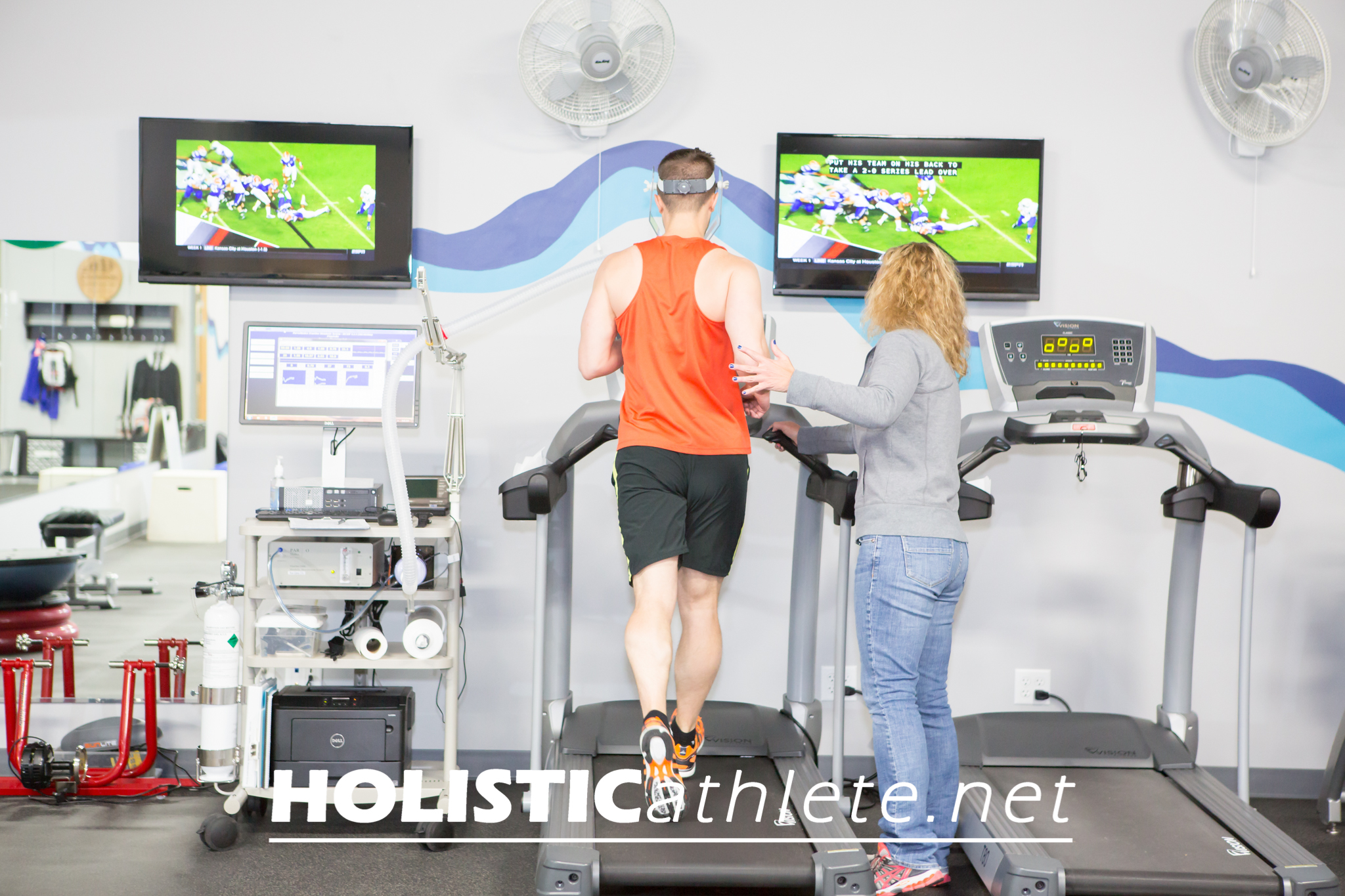 I was glad when she finally turned that fan on!

I knew it was going to be hard and I was disappointed that I couldn’t get in another segment, but I was spent!

Good news is that I managed to hold on long enough for them to get some great data…which I will share with you in Part 3!