My typical race reports consist of lots of words and a few pictures. Since I came away with so many good pictures this time, I’m going to flip the script and show you lots of pictures with just a few words to describe each. So here we go… 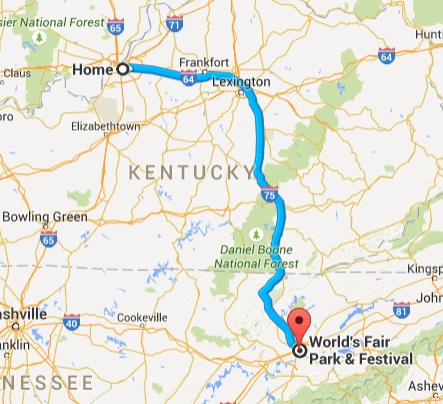 The race venue in Knoxville, Tennessee is 243 miles from my front door in Louisville, Kentucky. The trip usually takes us about 4-1/2 to 5 hours depending on how many times we have to stop along the way.

We stay at the Holiday Inn which is just a few minutes walk from the race expo/finish line. This makes it easy for the family to spectate! After we settled in, I took the older two kids and went down to the expo to get checked in and then to drop my bike off at transition. 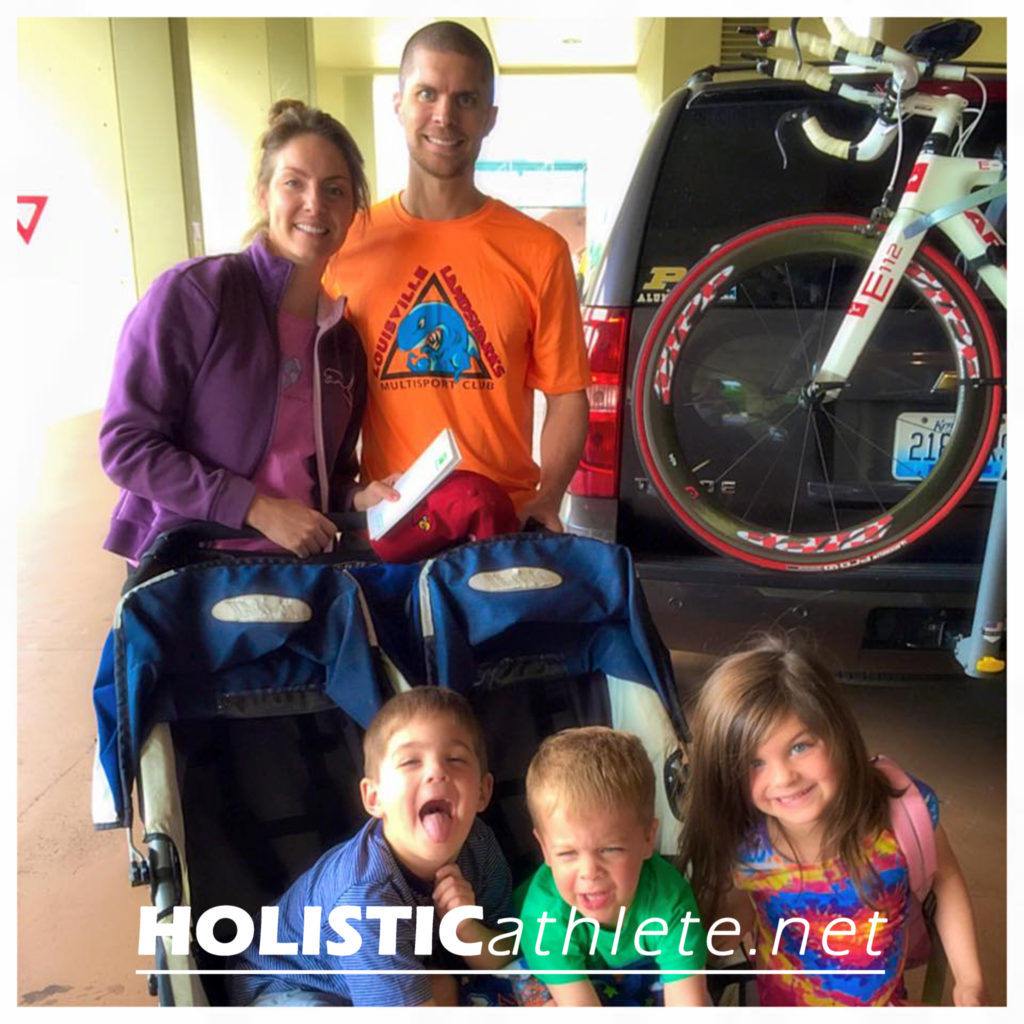 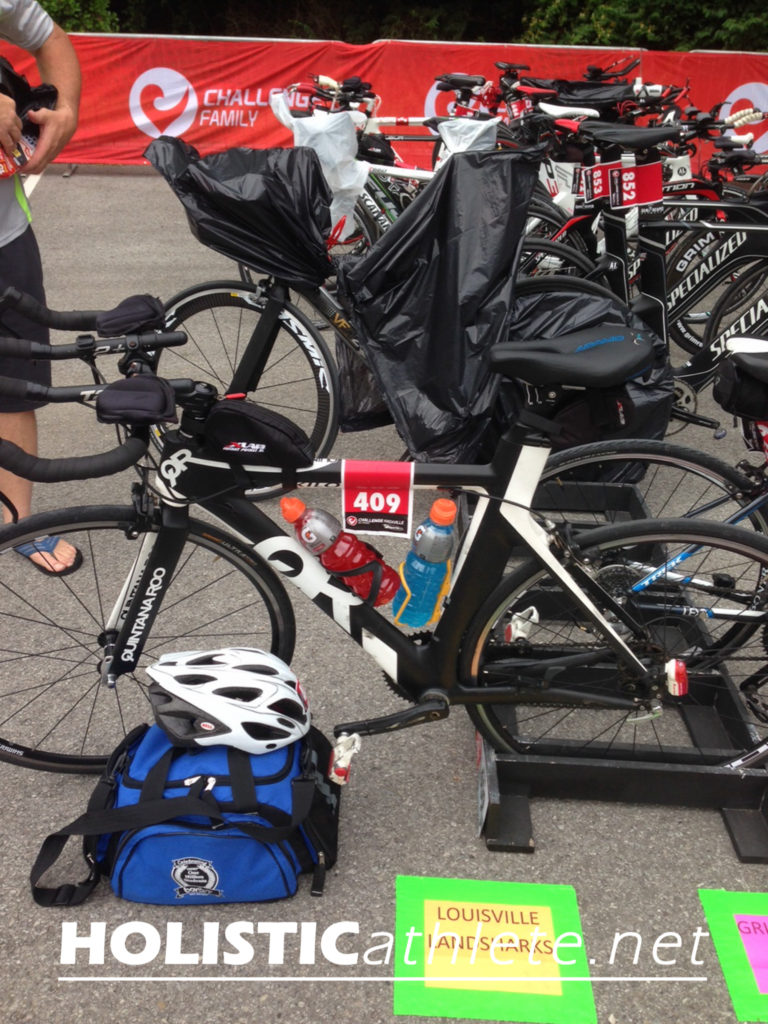 The last two years there has happened to be a reading festival going on at the World’s Fair Park, which is right next to the hotel. So the kids and I enjoyed playing some games, making crafts and being superhero’s! 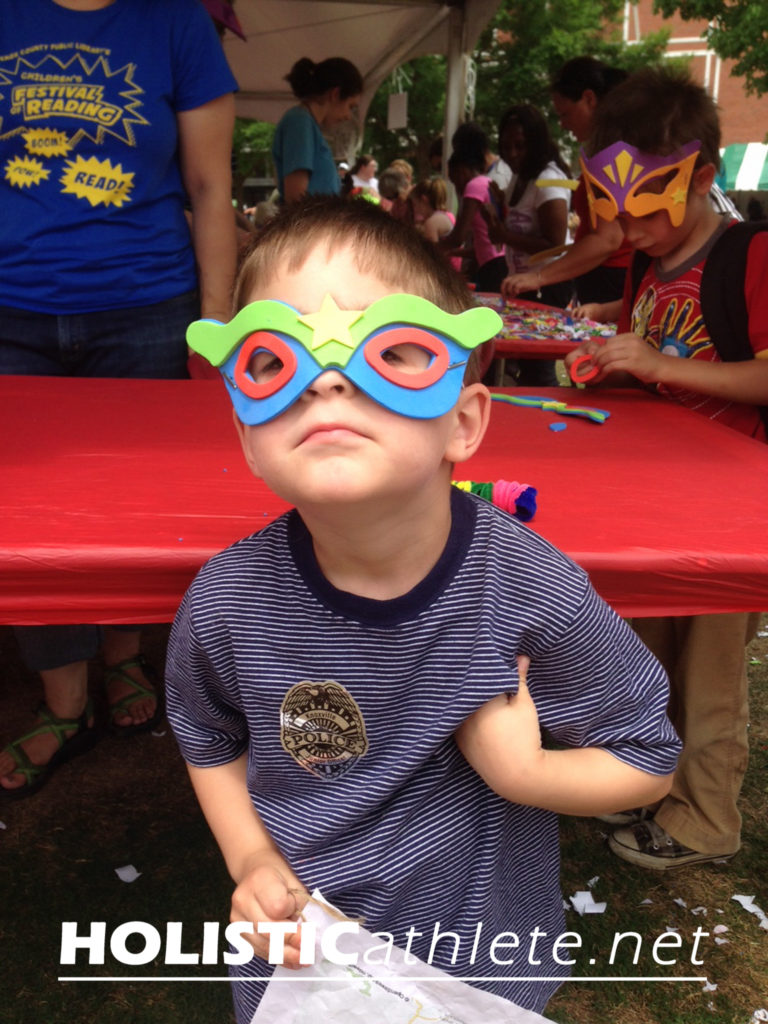 My little super hero / sheriff having fun at the Children’s Festival of Reading!

Saturday night, we met up with some fellow racers from Louisville and had dinner at Calhoun’s On The River. I had some salmon and a plain baked potato…and I got a parking ticket as desert!

Our crew (my family and my sister-in-law Becca) at dinner.

For the second time in three years, it was raining on race morning. I ate my small sweet potato and almond butter in the room and after fighting with the race number tattoos for a while, I headed down to transition. I wanted to make sure and give a special shout-out to Aaron Roberson. His bike was supposed to be right next to mine, but since he didn’t end up racing, I had plenty of room to set up my gear! 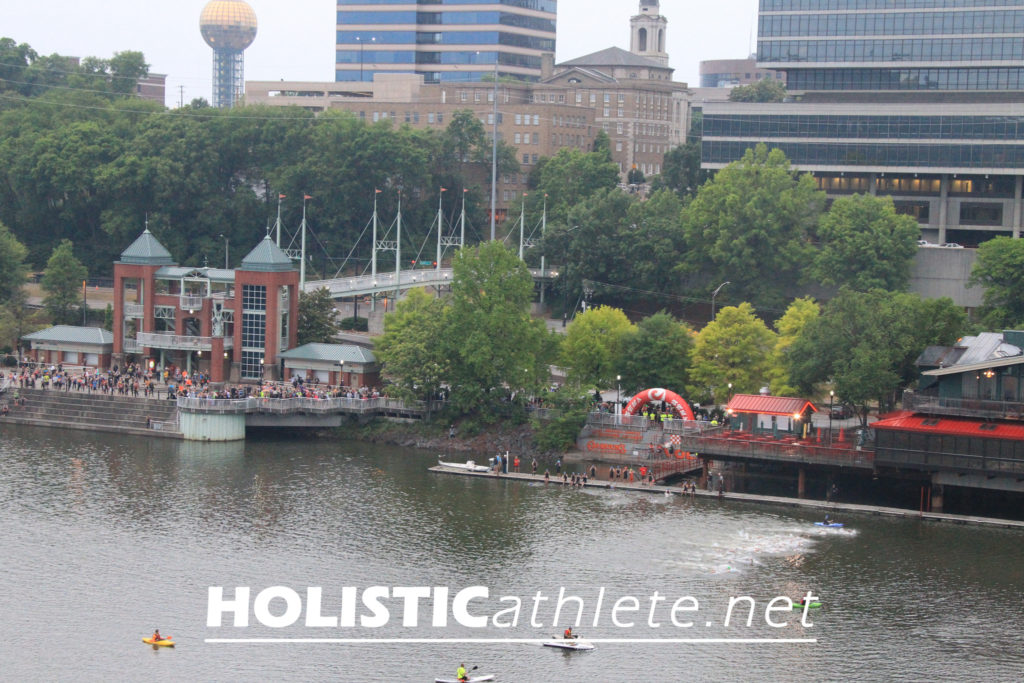 Swim takes place in the Tennessee River. Water temperature was 73F, so it was wetsuit legal.

Standing in the rain waiting for the race to start was pretty entertaining. I stood there with some friends and we watched people crowd under awnings and trees to try and stay dry…while wearing wetsuits…while waiting to jump in the river… 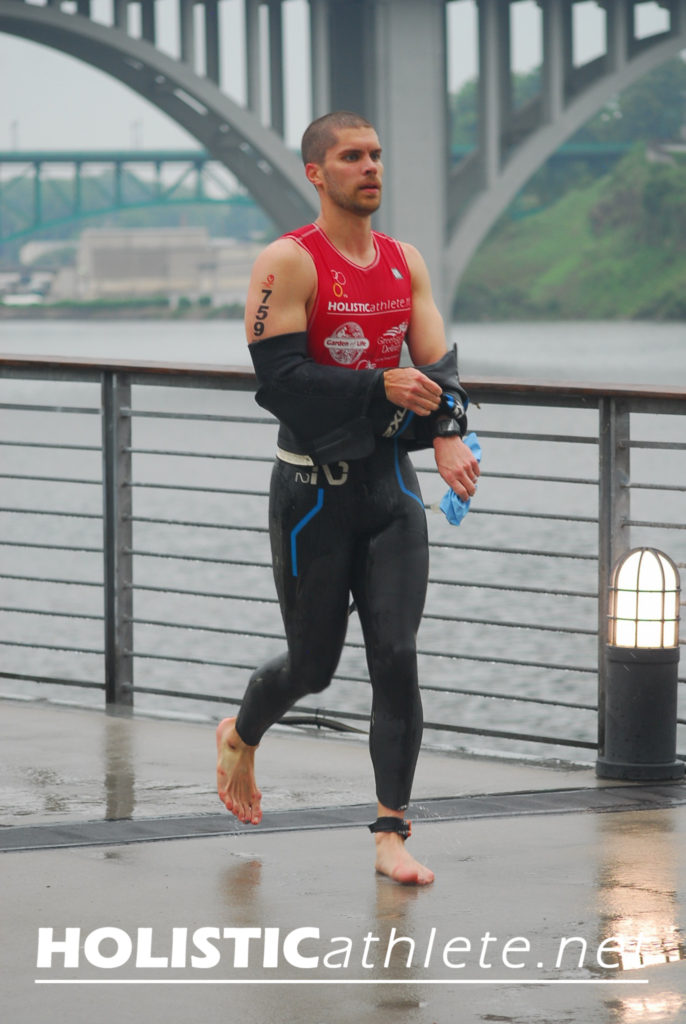 Pulling my wetsuit off as I run toward T1

Because of the rain, I made the decision (while setting up transition) to take the visor off of my bike helmet and instead wear sunglasses (with the amber lenses to brighten things up). I can sit the sunglasses down a bit on my hose and see over them if they get too wet….I don’t have that option with the visor! As I was coming out of T1 and mounting my bike, I knocked my water bottle off of the rear cage. Not a big deal. I stopped, picked it up and went to put it back on the cage only to notice that I had broken the cage as well! I have two bottle cages behind my seat, but I had broken the other one at TriFest the weekend before. So now I had a bottle full of my nutrition with literally nowhere to put it! My only option was to put it on my body somewhere. So I opted to stuff it down the front of my kit, into my cleavage. Sometimes you have to make quick decisions during a race! 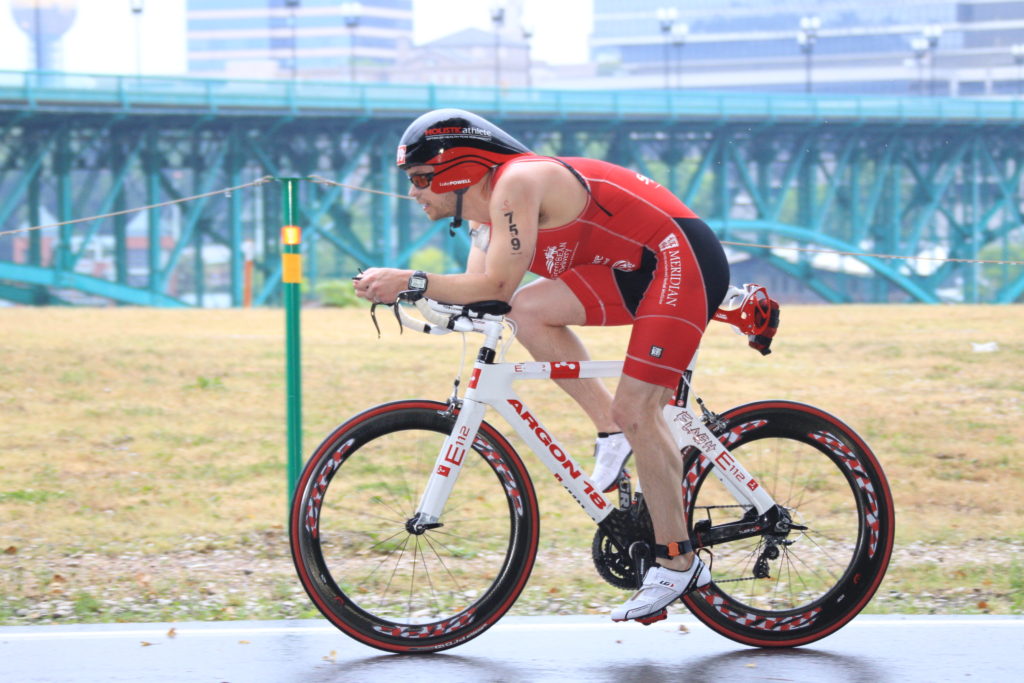 The sun actually popped out for about 5 minutes on the bike. 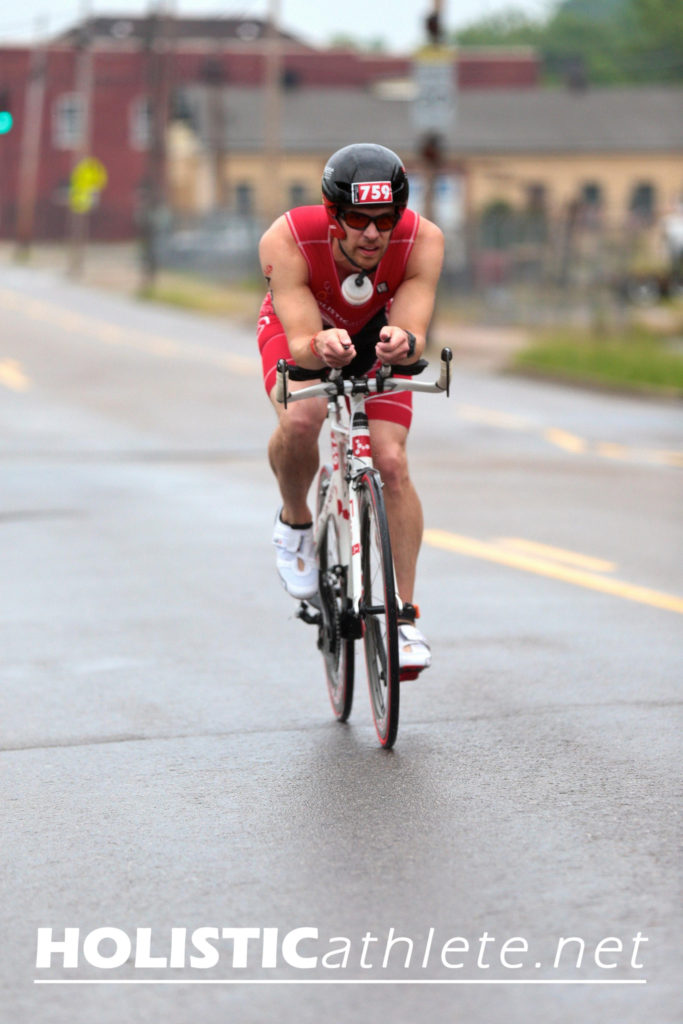 Note the water bottle sticking out the top of my kit…not the easiest place to get the bottle in and out of!

As I ran my bike into T2, I could hear my name being called. Despite the rain, my family had come out to see me head out on the run. It was good to see them and give the kids a high-five as I headed out. 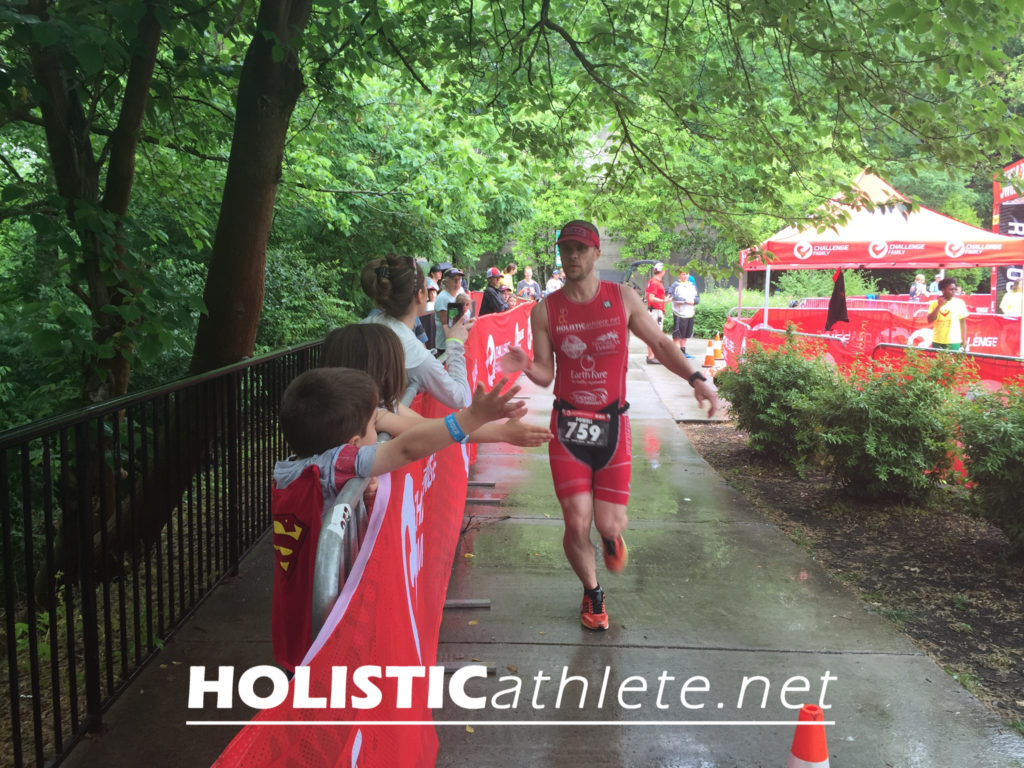 The rain stopped as I started the run, so now it was just hot and humid! I felt pretty good for the first mile or so and it was kind of cool to be passed by the pros (they started an hour before me and were doing the Half distance) during the run. I held a pretty steady pace through most of the 10K and even passed a few people in the last mile or so. 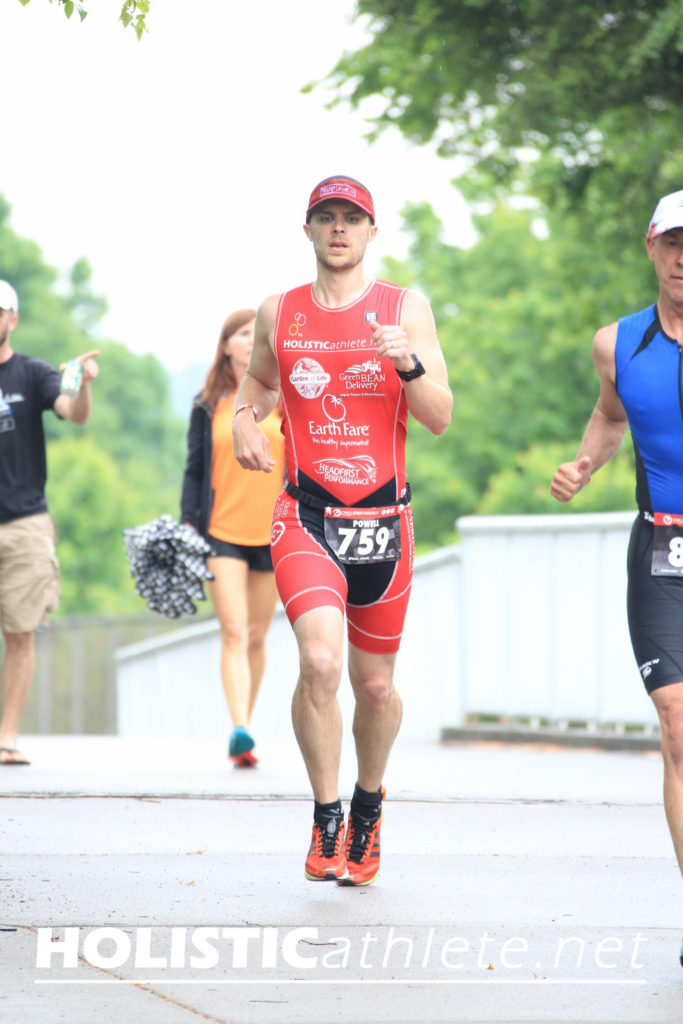 I had given Jessica written instructions (with a hand-sketched map or course) on how to get to transition and the finish line. I also let her know that Challenge Family races (unlike Ironman) will let your kids run down the finish shoot with you. My kids are now old enough to understand and enjoy doing this, so I wanted to make sure they were ready for me as I finished. As I ran toward the finish shoot I was quickly scanning the crowd looking for them. I spotted them standing with my sister-in-law and I stopped to tell them what to do. They were VERY excited! I scooped up the youngest and told the older two to run beside me. They quickly took off in an attempt to “beat Daddy” to the finish line! 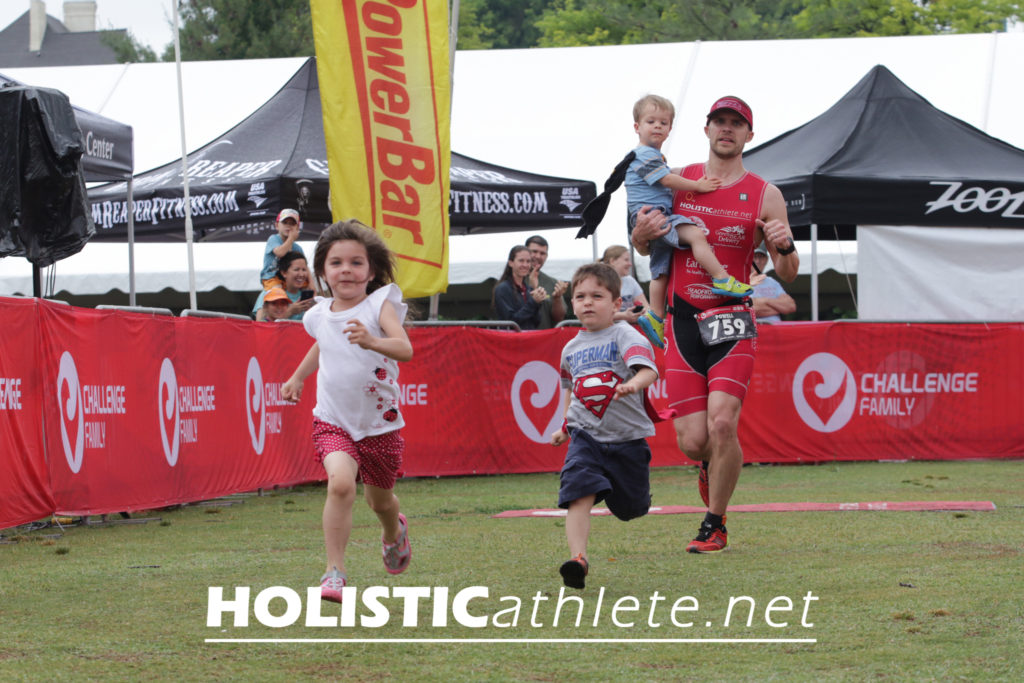 Gotta love the look of determination on Superman’s face!! 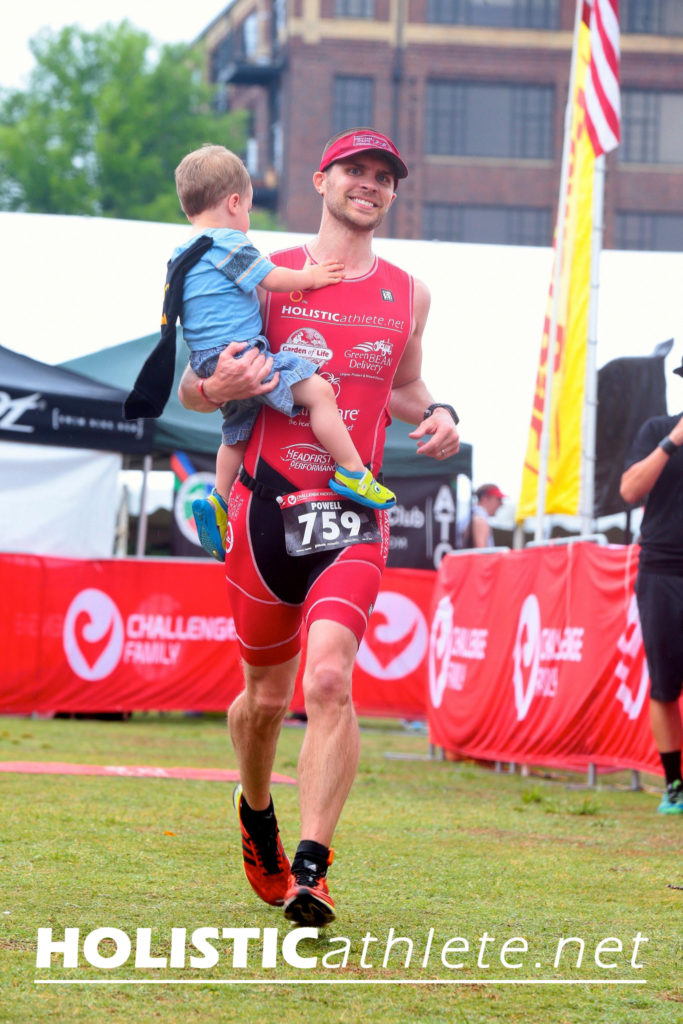 Despite being exhausted, I couldn’t help but smile as we all ran to the finish line!

It wasn’t my best time for this race, but overall I was happy with my bike and run times. My swim still needs a lot work, but I’m determined to get my form back before my last season races. 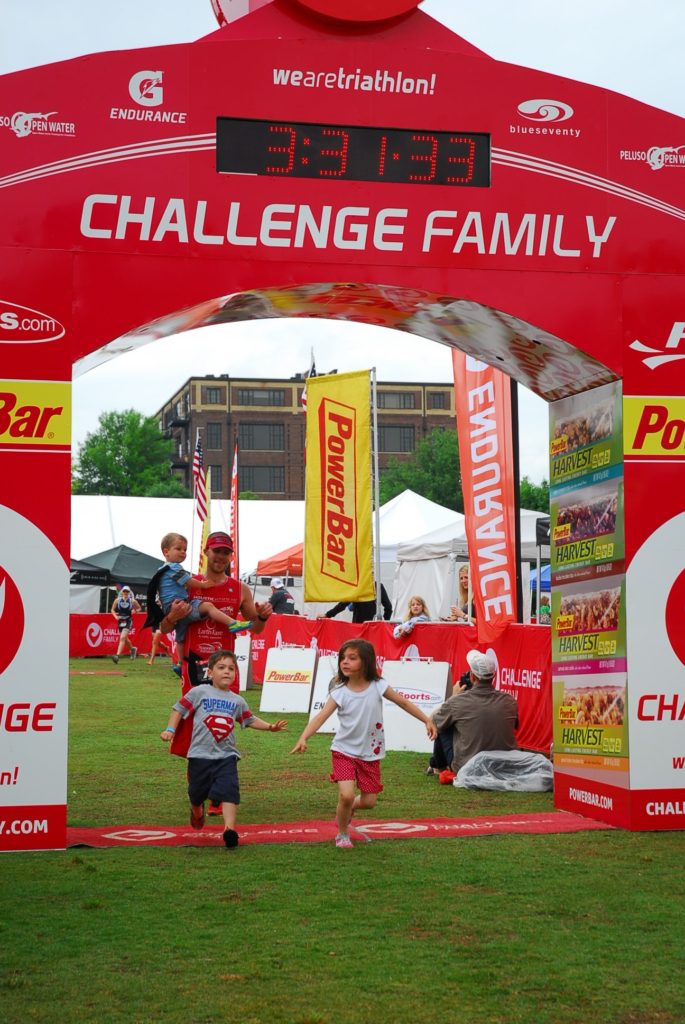 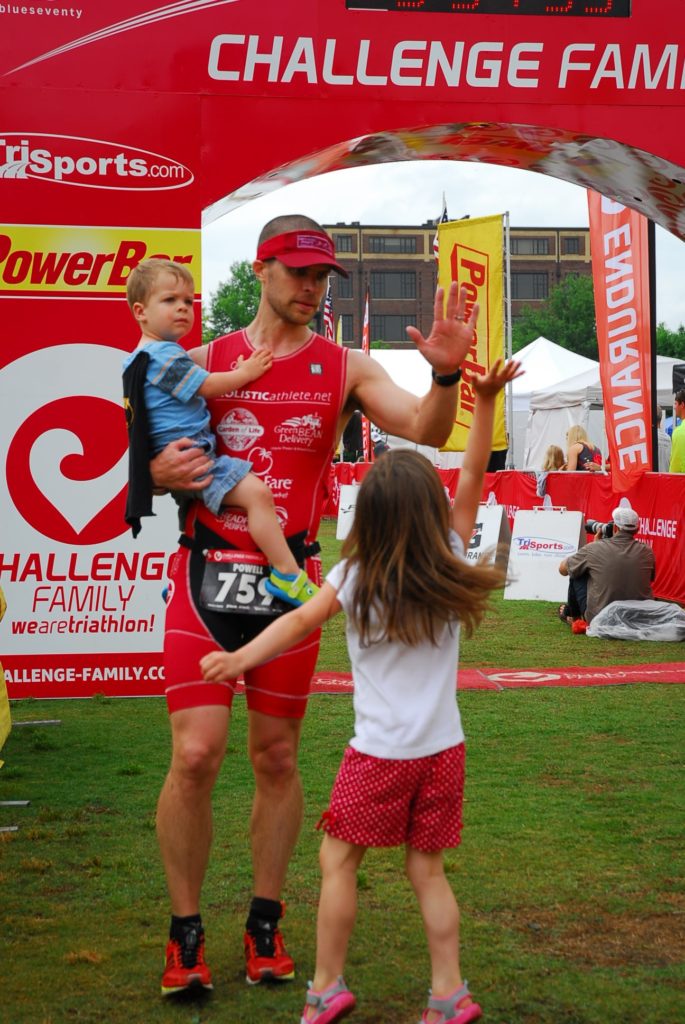 This was our fourth year making the trip to Knoxville with the family and it’s become a tradition we all look forward to. I can’t wait to do it again in 2016! 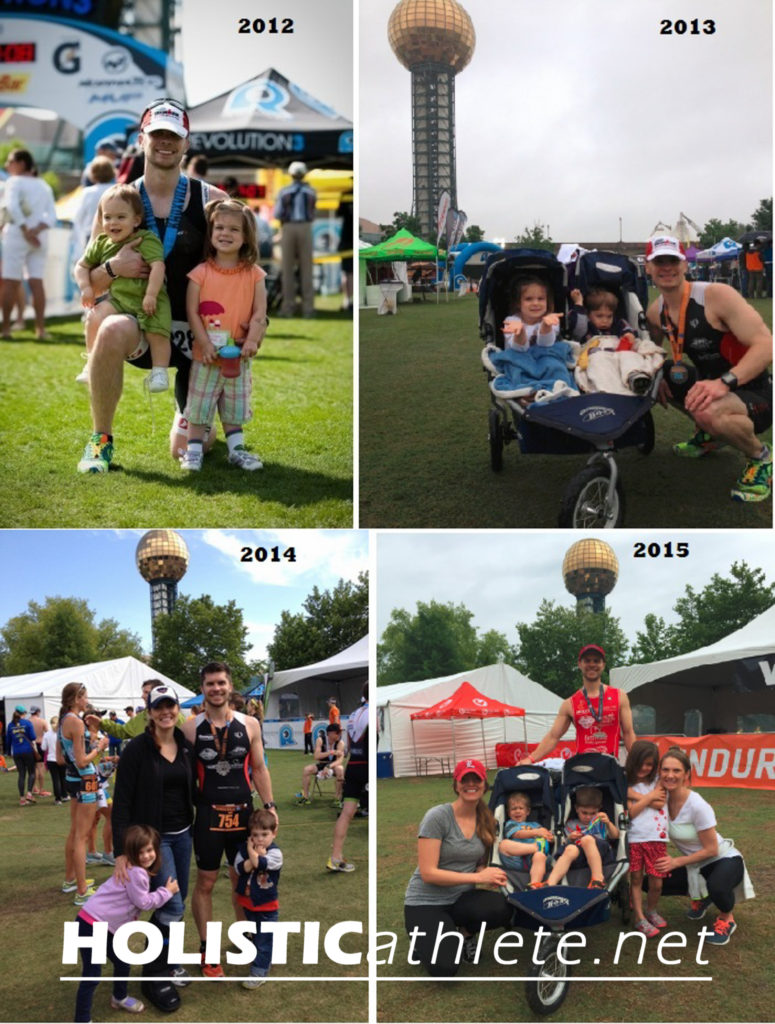