Sunday’s Sprint Triathlon was proceeded by Rodes City Run 10K on Saturday. I didn’t have very high expectations going into the 10K and it showed. My time was over two minutes slower than my PR for that race. Even though I wasn’t expecting to do well, I was still disappointed in my time. So at that point I had done three races in 2015 and had walked away being unhappy with  my performance in all three.

I felt a little bit of optimism as I packed my triathlon race gear Saturday night. The optimism came from the fact that I knew there would be a bike leg to Sunday’s race. There was no rain in the forecast and no ice or snow on the roads. I hadn’t been outside on my bike since September of last year and I really wanted to feel the road under the wheels!

I’m always one of the first people to arrive at the race site and this race was no exception. There was only one other bike in the transition area when I pulled up. I grabbed a spot on the rack and went inside to see what the plan was. There was some debate as to whether the swim or the run should be first. The temperature was in the low 40’s and some people were a little nervous about getting on the bike after coming out of the water. Personally, I prefer to swim first…even if it means being a little cold on the bike. So I was pleased to hear that the race would be done in the traditional swim, bike, run format.

I saw lots of people laying out clothes in the transition area to put on before starting the bike leg. Sweatshirts, pants, arm warmers, skull caps, socks, jackets…everyone had something to put on. Seeing this caused me to pause and think about what I wanted to do. I had brought some warmer clothes to wear if the run was first, but since all of my competition was going to be spending time layering themselves in T1, I decided not to. The bike leg was only 12 miles and I knew that I could do it in around 30 minutes…and I can suffer through nearly anything for half an hour. It was a bit risky, but in a race this short, every second counts! 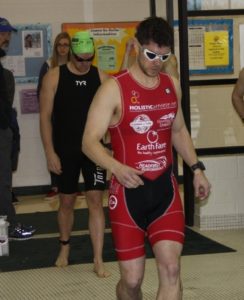 Getting ready to enter the pool and start my race.

We self-seeded for the swim start. This means that everyone kind of lines up based on where they think they belong – faster swimmers in the front of the line, slower swimmers in the back. I’m by no means a fast swimmer, but based on seeing where some other people I knew were lined up, I ended up being about eighth or ninth in line. I was hoping to do the 400 yard swim in about six minutes. My swim times from this race in the last few years has been 6:18, 6:05 & 6:10…so I though six minutes was reasonable. Apparently my lack of time in the water so far this year has really slowed me down. I was passed twice during the 400 yard swim and I knew that my time was not going to be good. I still pushed it hard, but come out of the water much slower than I had hoped for.

As I exited the pool, I ran past one guy that was putting on a pull-over inside the building before running outside to transition. As I ran down the hill toward transition, I saw four or five people putting on clothes in T1. I knew that this was my chance to make up the time lost in the water. I ran into T1, threw my goggles down, put on my helmet and ran my bike out. No one that was already in transition when I got there left before I did…so I knew that I had made up at least a few seconds on some people.

Once out on the road, I put my feet in my bike shoes (they were already clipped on the pedals) and slipped on my gloves. I had my gloves hanging on my aero bars so that I didn’t have to take time in transition to put them on. Once I was situated, I started to really hammer on the bike. I had some issues with my rear derailleur while putting my race wheels on the night before and things still were not at 100% as I noticed it was skipping a gear here or there.

I knew that I wanted to push the bike hard and then try to hold on for the run. This is a recipe for disaster during a longer race, but with these short sprint races, this strategy has worked for me in the past. The course was two, six mile loops of rolling hills. I passed only one person on the first loop and never even caught site of anyone else in front of me. Once on the second loop, it got pretty crowded and based on the speed of everyone I passed, I knew that I hadn’t caught up with anyone else that was out of the pool ahead of me. I rolled into transition feeling pretty gassed, but confident that I had put some distance between myself and some other guys. This ended up being my fastest bike split ever on this course (by 4 seconds). It’s nice when you see hard work during the off-season pay off during a race! 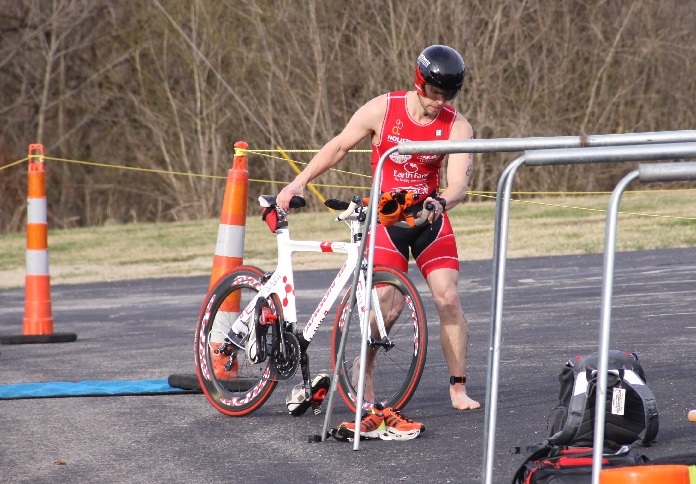 Believe it or not, I really didn’t get cold on the bike.

I hopped off my bike, got it on the rack and took my helmet off. My shoes went on pretty easy and a grabbed my race number belt and ran out of transition. I thought that I was in and out of there pretty fast, but to my surprise when I looked at the results, five other people had faster transitions. I’ve got maybe a few seconds that I could shave off, so I accept the challenge and will be faster next time!

The run starts off going straight up a hill. I was asking my legs to go, but they weren’t responding. The 10K the day before was showing up in my legs. I was running an 8 minute per mile pace and I knew that if I didn’t get my legs to fire, I was going to be passed by a LOT of people on the run. Once I found level ground I decided to look for that extra gear. To my surprise, it was there. I could see some guys up ahead of me and I tried to focus on keeping my cadence high and making up some ground. The run is an out and back through the park. It has some long hills and one short steep climb on the way back. After hitting the turn around, I could see all of the guys chasing me. I knew that at least two or three of them were faster than me, so I tried to hold my pace. The last 3/4 of a mile was painful, but I enjoyed the feeling and even more than that, I enjoyed the fact that I was able to block out the pain and continue to increase my pace at the end. I wasn’t able to do this in the last Shelbyville race or during the Anthem 5K a few week ago. 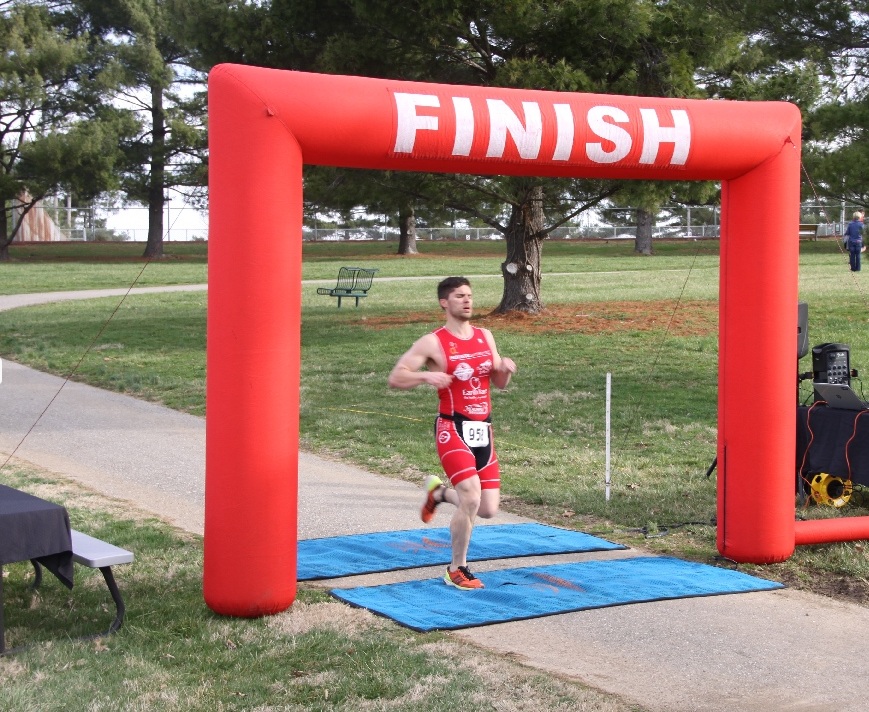 I was happy with my overall time and knew that I had put down a good bike split and a decent run. I was hoping that my crappy swim didn’t cost me too much. I was thrilled to see the age group win and top 5 overall finish!

One of my favorite parts of a triathlon is the time after a race when we all stand around talking about the highs and lows of the race and exchanging congratulations or sympathy. The tri community is one of a kind and even though it’s an “individual” sport, there’s a comradery that is very similar to teams that I have been a part of in other sports. It’s going to be a fun season and with the good result in this race, I have a little bit of my mojo back and I’m even more motivated to train hard, eat right, take care of my body and enjoy the results!