I can now say that I’ve participated in “The largest gravel road bicycle race in the world”. At least according the the Barry-Roubaix race website. With 3,500 riders, I believe it!

When I won a gift certificate to VO2 Multisport last spring, I wasn’t sure exactly what I wanted to do with it. My triathlon bike was five years old, but was still in good shape and I didn’t see the need in upgrading it. Buying a mountain bike was an option, but I just didn’t see myself being able to get out on the trails much. What I COULD envision was eventually doing some Cyclocross races. So with that in mind, I spend my gift certificate on a new Specialized ‘cross bike. I knew having this bike would force me out of my comfort zone, which is on the road…and boy, has it ever!

Apparently, another great use for a cyclocross bike is gravel races. I was talked into doing the Gravel Grovel last fall by a friend of mine. Peter had talked the race up in the past, but now that I had a bike that I could use in the race, I almost felt obligated to do it with him. That race last November was brutal! I had good bike fitness having done Ironman Louisville a few weeks earlier, but I was not mentally prepared for 60 miles of thick mud, narrow trails, cold rain and several creek crossings! That race took me almost six and a half hours to complete…and it felt like days. I’ve never been so cold during a bike ride. I didn’t get feeling back in my fingers for several hours.

So based on that lovely experience, I decided to sign up for another gravel race (I love a challenge!). There were a couple of races to choose from that are within driving distance, but what I did like about the Gravel Grovel was doing it with friends. So I waited to see what race Peter was thinking about doing and decided to follow suit. We signed up for the Barry-Roubaix race. It’s held every year in Hastings, Michigan on the third Saturday in April. As a bonus, Peter’s Mom lives near Detroit and was more than happy to have us as her guest for the weekend. 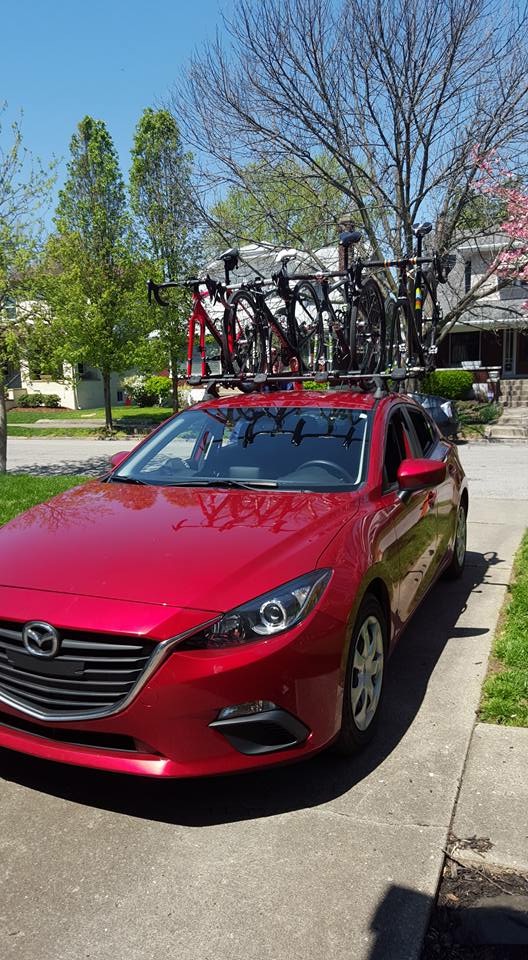 Peter’s car loaded down with 4 bikes.

Along with Peter and I, Rich and Rachel made the 360 mile journey from Louisville to the Motor City. 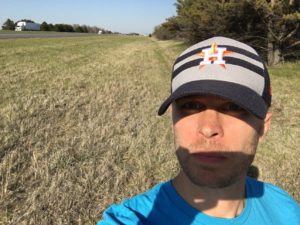 We left Friday afternoon and the trip became memorable right off the bat. Somewhere along I-75 in central Ohio we lost the front wheel for Rich’s bike. It was on the bike rack on the top of Peter’s car and decided to take flight as we drove 70 miles an hour down the interstate. Another motorist pulled up beside us and let us know that we were losing bike parts as we cruised down the road. We went back and split up looking for the wheel. After each walking a mile or so searching the shoulder of the road, we gave up looking.

Thanks to the crew at D&D Bicycles in Northville staying open until 8pm on a Friday night and having the tire and tube we needed and a sweet wheel from Peter’s Mom’s bike, we were able to get Rich back in business.

As I was lying in bed Friday night I received a call from my wife. She had missed a step walking down the steps from our back deck and she was almost positive that she had broken her foot. With the kids being with Mimi for the night, she decided to wait until the morning to get an x-ray. Our amazing next-door neighbor stepped up and drove her to Immediate Care Saturday morning. So as I was waiting at the start line, she was waiting to get the results of the x-ray.

The race gave riders three options. You could ride 62 miles (The Killer), 36 miles (The Thriller) or 22 miles (The Chiller). You could do any of these three distances on the bike of your choice (mountain, cyclo-cross, road, fat tire, etc.). You could also choose to have multiple gears or do it on a single-speed. Rachel and I chose to do the 62 mile, multi-gear route. Peter and Rich did the 36 mile course on a single speed. 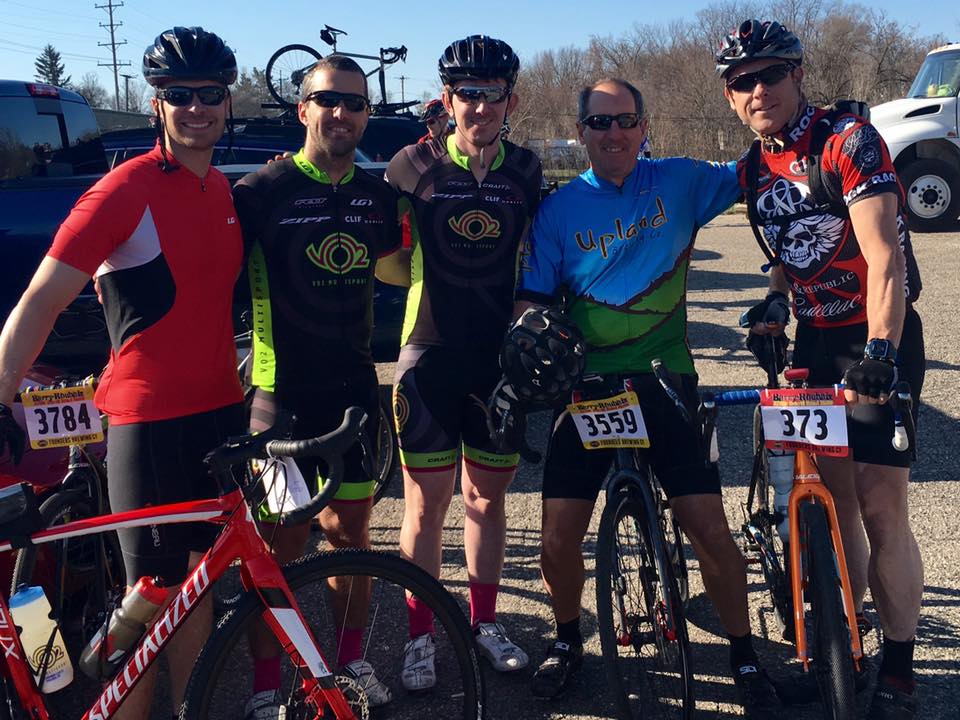 I had done a little research and this course appeared to be a little less technical than the Gravel Grovel and the weather was MUCH better. It was in the 50’s as the race started and the high for the day ended up being in the low 70’s. 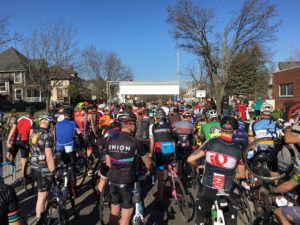 My view at the start line.

I was in the first of fourteen waves and left right at 10:00AM. When the gun went off, I quickly found myself in a pack of riders going 30 miles per hour on the flat, paved road. As I looked around, I had bikes 6″ on all sides. I’m not used to this type of road racing. In triathlons, I’m constantly trying to stay away from other riders to avoid drafting penalties. In road races, drafting is the norm. As I backed off the pace, a group of 20 or so riders pulled away when the paved road turned to gravel.

I’m not going to go into details on the course, but it was probably 80% gravel roads with the rest being on pavement. The gravel in this race was what I expected in the Gravel Grovel. For the most part, these roads were driven on by cars. There were some areas where it was sandy and only a 4X4 would be able to navigate through without getting hung up. I had to dismount and walk the bike through two of these sections. 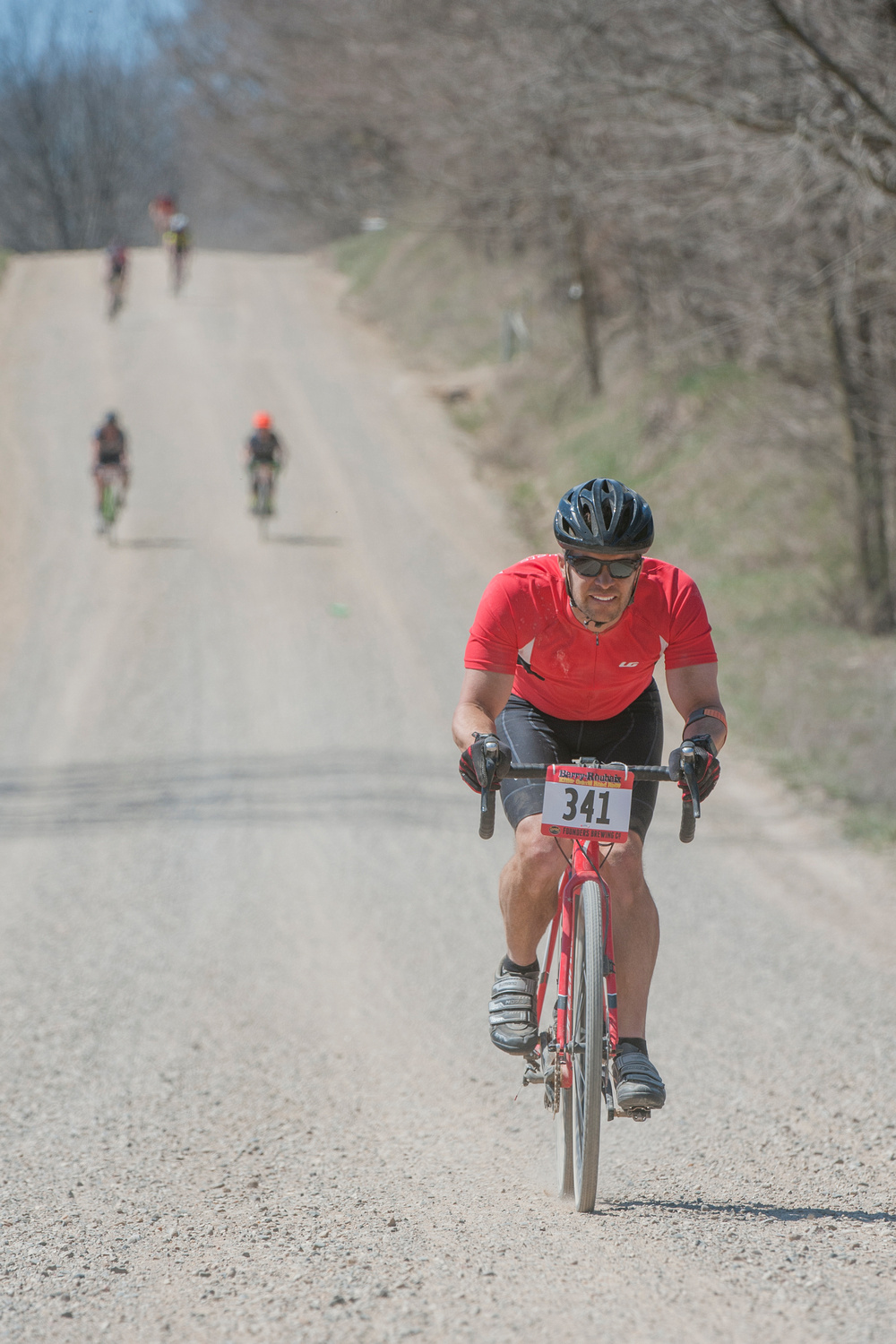 In order to show you how tough this race got for me, I’ll divide it into three segments – each around 20.5 miles.

I clearly pushed it hard as my heart rate shows. Holding an average of 155 bpm on the bike is hard for me to do. My max climbing the largest hill was 175 bpm, which is probably close to a new bike max for me. 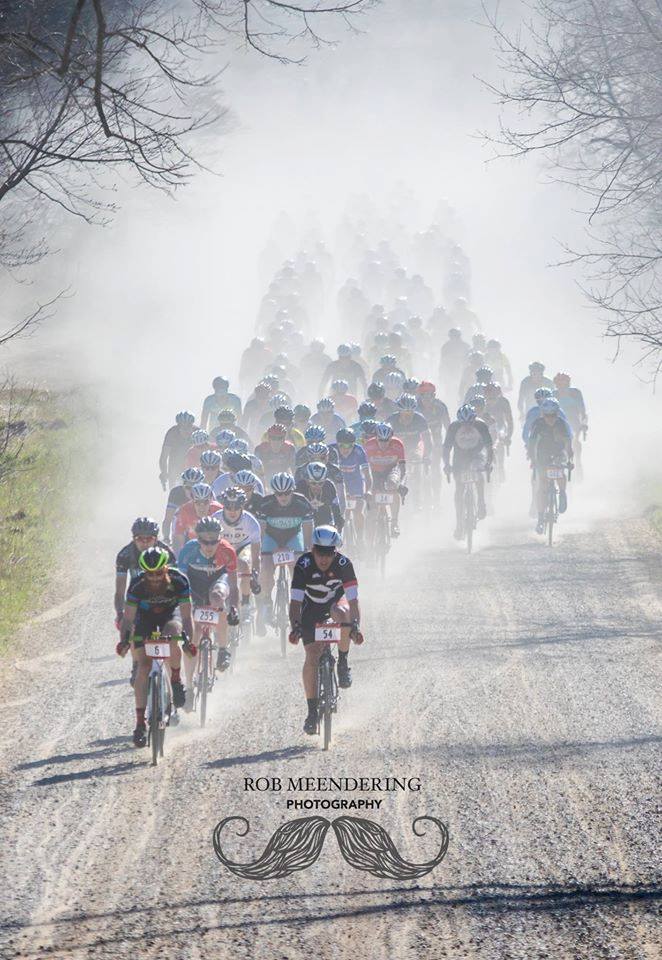 This second segment didn’t have as many climbs, yet my average speed decreased. My heart rate is still high, but now I was settling back into my aerobic zone. By the time I got to the end of this segment (mile 41), I was starting to feel it. My nutrition (UCan Superstarch and Almond Butter) was adequate for riding in an aerobic zone, but seeing how high my heart rate was during that first 20.5 miles, I’m sure I didn’t take in enough calories, so I was already in a deficit. The other potential reason for my struggle was dehydration. The sun was out and even though it wasn’t scorching hot, when I’m running at an average heart rate this high, I’m sweating! I have two bottle cages on my bike and I had a bottle of nutrition in each one that would cover approximately 2 hours each. I only had one jersey pocket big enough to hold a water bottle, but I decided to put my cell phone in that pocket thinking that there would be adequate water at aid stations on the course. I was wrong. I’m not blaming race organizers at all for there only being two water stops, it’s always the responsibility of the athlete to carry what they need. I made the decision to not pack water with me, and it cost me. 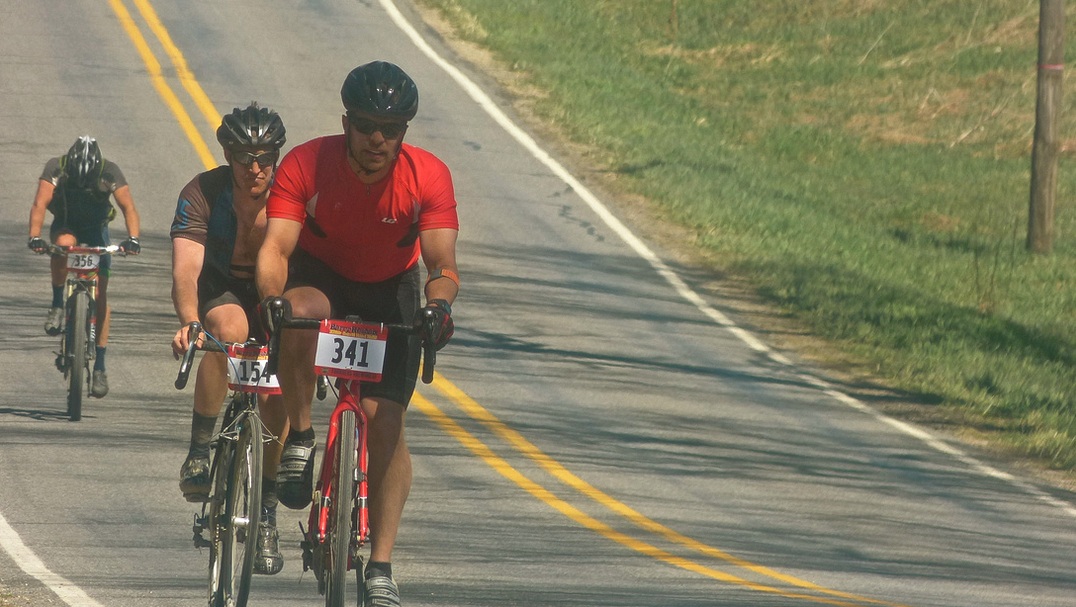 One of the few paved stretches of road. – Photo by Al Stover Photography 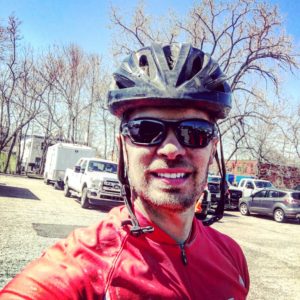 Post-Race selfie…covered in dirt from head to toe!

The final 20 or so miles were hard! If you compare it to the second segment, the elevation gain is similar, but look my time – an additional 13 minutes was needed to get me to the finish line. I ended up finishing in a time of 4:02:51, which put me 333rd out of 482 finishers. I don’t have a power meter on this bike, but I wish I did. I had to be pushing some serious wattage! As you can tell from the picture to the left, it was a dry and dusty day. I was covered in dirt by the time I crossed the finish line. I remember being completely exhausted and feeling much worse than after any century ride I’ve ever done on pavement. These gravel races are brutal!

The first thing I did when I stopped riding was pull my phone out of my jersey pocket. I wanted to see what the diagnosis on Jessica’s foot was. It was not the news I was hoping for, but what I expected. A broken fifth metatarsal bone in her right foot. I called her and I knew that I needed to get home as soon as possible. Taking care of three small children, while pregnant, and not being able to put any weight on your foot is impossible.

After finishing I saw Rachel. Little did I know that she smoked the competition and was the top overall female finisher on the 62 mile course with an unbelievable time of 3:08:37! I honestly don’t know how that is possible. Even as I type this, I’m still amazed that she rode it that fast. 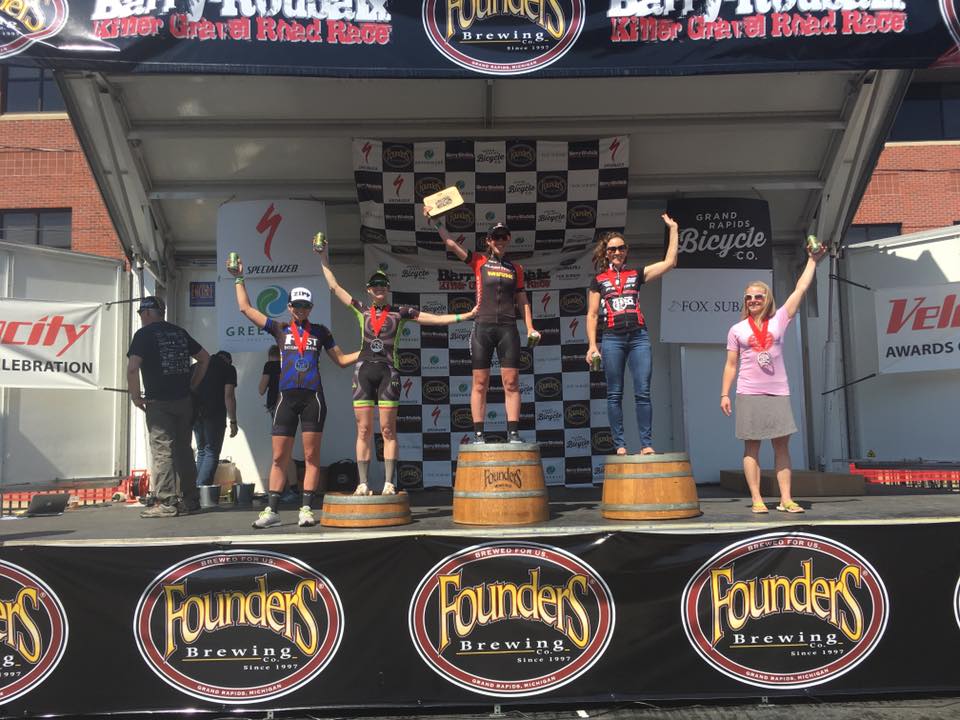 Women’s Podium – Rachel in the middle

After joining Peter and Rich at the post-race party and watching Rachel take the stage to receive her award, we drove back to Peter’s mom’s house. She was an amazing host and even took the time to call rental car companies for me while we drove back. After taking a shower, I took a cab to Budget Rent-A-Car at the Detroit airport and started my drive home. It was right around 8:00PM when I get in the car. 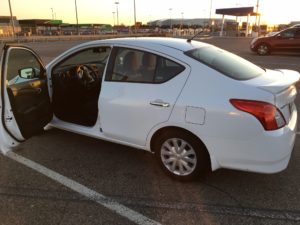 My rental car – I went for fuel efficiency!

The five and a half hour drive home was not that bad. I found the Astros versus Tigers baseball game on the radio, which kept me occupied for a few hours. After I lost that signal, I plugged my phone up and passed the time listening to some old-school hip-hop on Spotify. I got my fill of Ludacris, Outkast and Biggie Smalls.

This was a memorable experience for lots of reasons, but at the end of the day, I’m glad I went. Getting myself out of my comfort zone is good for me mentally and physically. I also learned that being a strong rider on smooth roads does NOT translate to being a strong rider on unstable ground. If I ever want to be competitive in a race like this, I will have to learn how to take corners better and stay with packs of riders. There’s a reason the term peloton exists!