Since January 1st, I’ve averaged just 17.2 miles run per week. Most marathon training plans call for at least double that. The average time each week that I spent out pounding the pavement was only 2.3 hours. I also only had one “long” run, which was 18 miles. This Runner’s World article recommends 100-140 miles per week for elites and 30-50 for amateurs. Another article, linked here, suggests that the more miles you log per week, the faster your time will be. The chart they compiled shows that with the 17.2 hours that I averaged, my marathon time should have been 4:23. So how did I manage to run 43 minutes faster than that this past Saturday? The same way I knocked out an 11:32 Ironman on less than 7 total hours of training a week. 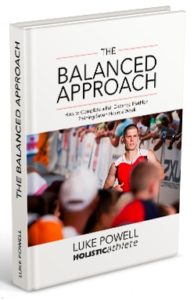 My approach to training for anything stems from necessity. With a family of five (soon to be six), a full time job and other volunteer obligations, I simply do not have time to train as much as traditional marathon or Ironman plans call for. I squeeze in every second of training I can in a day. I simply choose mental (happy family, successful career, free time, etc.) and physical health (longevity and all the extra things I do to make the most of my training) over the possibility of improved performance come race day. Leading up to the Kentucky Derby Festival Marathon, I simply followed the running workouts outlined in last 16 weeks of Ironman training found in my book, The Holistic Approach. As it did during Ironman Louisville last October (4:03 run split), the workouts had me ready for 26.2 miles this time around as well.

The forecast for in the days leading up to the 2016 Kentucky Derby Marathon had been calling for rain. Just how much and when it would start was anyone’s guess. So race morning I prepped for rain by making sure I had a garbage bag to wear prior to the race, I had my Swiftwick socks on to get the moisture off of my skin, I had a hat on and I covered probably about 75% of my body in Chamois Butt’r to prevent chaffing.

My nutrition plan was exactly the same as the marathon portion of Ironman Louisville (why change something that I know works?). I took my fuel belt filled with plain Generation UCAN SuperStarch mixed with Coconut Water and a few packs of Justin’s Almond Butter. I had enough to give me around 120 calories per hour of slow-burning carbohydrates and protein for a steady flow of energy for the entire race, no spikes like I would get from gels or the Powerade they were handing out on the course. I drank water at every single aid station and never felt a bonk or a cramp coming on.

My goal was to run the race in the 3:30 to 3:35 range. This equals out to a pace between 8 minutes and 8:12 per mile. As with any long race, the first few miles are just as important as the last few. If you go out too fast, you will inevitably blow-up too soon. I also wanted to make sure I got my body into fat-burning mode right out of the gate. If I let my heart rate get too high, I would start burning glycogen and there’s no turning back once that gets switched on during a race. I knew from my metabolic test and from some test runs that I needed to keep my heart rate in the high 140’s in order to stay in my fat-burning zone. Normally, this would equate to my goal pace of 8:00-8:15 per mile.

The first mile was a little congested and I ended up running through and around lots of slower runners. I’m used to running the mini (half) marathon that runs at the same time, and I’m normally in the “A” corral based on my faster pace for the 13.1 mile race. However, for the full marathon, I was in the “C” corral. Since I forgot to register for the race (not like me at all), I ended up buying a bib and racing as Philip Middleton, who was injured and unable to run. I’m not sure what estimated finish time Philip put down when he registered, but I don’t think the “C” corral is the 8:00/mile group based on the fact that I didn’t stop passing people until mile 5 or 6! 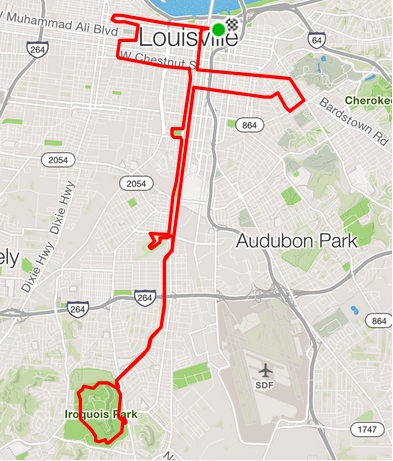 A lot of things go through your mind during a long race. You can let your thoughts bring you down or they can lead you to do amazing things. As I started the second half of the marathon I knew that reaching my goal was going to be nearly impossible and I also figured that there was going to be no end of the steady rain. I started to think of positive things. My body felt good. I had no feeling of blisters on my feet. There was no chaffing. I was starting to get into a good rhythm. I was telling myself that my body knows how to run a marathon and I know that it takes me a little while to get warmed up. I started to high-five kids that were out cheering us on. I yelled or pumped my fist at people that were playing music along the course. I said thanks to the volunteers at the aid stations and road blocks. I started to…have fun!

When I got to mile 21, I was trying to determine when to abandon my heart rate zone and go for broke, increasing the pace and pushing it hard to the finish. Mile 21 went by in 8:24 and that’s when I decided to switch off the heart rate screen on my watch and go to the screen that showed pace and overall time. I wish I could say that my final 5 miles were at a blazing fast speed, but by this point, holding the pace I had been running was going to take more effort. So despite letting my heart rate climb into the 150’s, my splits for miles 22, 23, 24 & 25 were not much faster (8:33, 8:46, 8:20 & 8:24). As I turned right on 3rd Street off of Broadway, I knew that I had just over a mile to go. So I let if all go and ran hard to the finish. My last 1.2 miles were at a 7:58 pace and my average heart rate was 162! 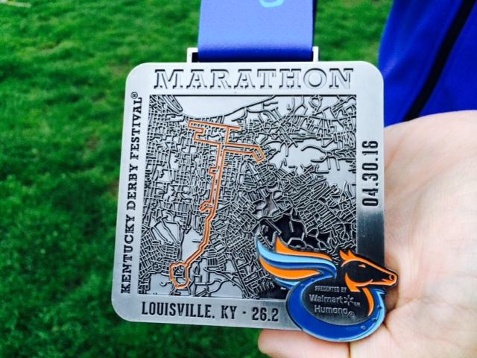 I crossed the finish line with an official time of 3:40:31 (8:24/mile), with an average heart rate of 150 bpm and an average cadence of 88 foot strikes per minute. I mention my cadence for the simple fact that two years ago I bought a cadence meter and I’ve been trying to get my “natural” cadence closer to 90 since then. I used to have a cadence around 83-85, so seeing that I can run a full marathon comfortably at a cadence of 88 is a big accomplishment for me.

Outside of an Ironman, I’ve only run one other marathon. It was the Indianapolis Monumental Marathon back in November of 2010. You can ready my race report here. I just read it again and it was interesting to see that I had a similar goal time back then, but struggled to finish with a time of 3:56. At least I had a better hair cut this time around! Why did my wife let me out of the house with that mop on my head??