I’ve been doing at least one or two of the Winter Shelbyville Sprint Triathlons for the last six years. The races are a great way to kick off the season and I always enjoy the competitiveness and supporting Headfirst Performance races. These early-season races also have an extra element of excitement…the weather! Depending on the temperature and conditions (snow, ice, rain, etc.), each race can take on a very different identity. Some will be reverse order (run-bike-swim), some my not have a bike portion at all and sometimes they are actually done in the traditional swim-bike-run style.

This year I had planned to do all three races of the series, regardless of discipline order or bike cancellation. The first race was on February 28th and while it was cold, the roads were dry and we were able to do the race as planned. I didn’t write up a race report for this one, but it was fast and furious (insert Lucadris rap lyric here). The run was first and was only 3K (1.86 miles) and it took quite an effort to stay close to the top runners. I came in to T1 in 11th place. The bike was only 6 miles long, so I didn’t have much distance to make up ground. I had a fast transition and made up a few seconds. My bike split of 15:23 (23.4 mph) got me up to fourth place entering the water for the 400 yard swim. I entered the water right behind Bryan Wiemers, whom I would battle with in all three races. He and I both passed two people in the water, but his swim split was 5 seconds faster than mine, giving him the overall win by almost 10 seconds. I was happy with the 2nd overall finish as there was a strong field and it was fun to race knowing what position I was in during the race and pushing to get to the podium.

The second race, held on March 20th, didn’t go quite as well and thanks to a mechanical bike problem (which you can read about here), I wasn’t able to catch up and finished in 5th place…but only 19 seconds behind 2nd place (Bryan Wiemers). 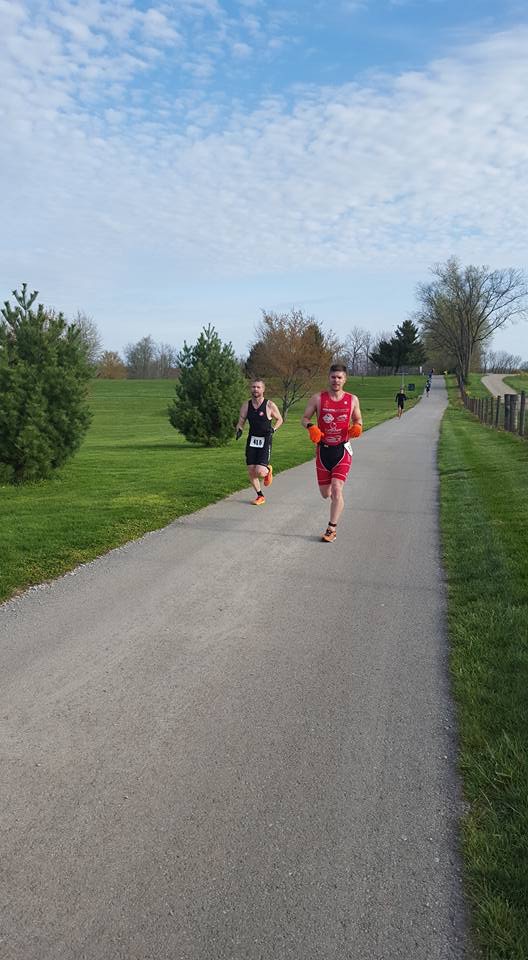 Finishing up the 5K run. Photo courtesy of Cynthia Heady.

The third and final race was on April 10th and had to be done in reverse order as well thanks to temperatures in the high 30’s at race time. I was happy about the reverse order because with a swim first, the time-trial start makes it hard to know what position you are in at any given moment in the race. I usually know most of the people doing these races, or at least recognize them, but this particular race had some unexpected guests. The triathlon club from Hope College in Holland, Michigan made the trip down to do the race. I had no idea what to expect from this group. So we started with a 5K run. As with the other races, my only goal in the run is to stay close enough to catch everyone (or as many people as possible) on the bike. I finished the run in 20:59 and was in 11th place (behind lots of the fast college guys!). The bike leg of this race was longer (16 miles), so I knew that I would have time to take advantage of my strongest leg (pun intended) and get up to the front. I had a quick T1 and was managing to catch and pass one rider at at time. By the time I reached mile 5 or 6, I no longer saw anyone out in front of me. I wasn’t sure, but after a few minutes, I was confident that I was leading the race. I continued to push as hard as I could – assuming that someone was coming up from behind to catch me. My bike split of 42:53 (22.4 mph) ended up being the fastest in the race, but it left me pretty exhausted heading into the 400 yard swim. As I ran up the hill out of T2 to the pool, I looked back and I saw someone coming off the bike into transition. So I knew that my lead was less than a minute. I tried to keep my form together as I swam as hard as I could. The swim consists of snaking through 8 lanes of a 25 yard pool, going up and back in each lane. I was about 75 yards in before I saw anyone else get in the pool. I kept glancing over to see how close the gap was getting. I knew right away that whomever this was behind me was a very fast swimmer (he ended up having the fastest swim split of the race). He was gaining on me quickly. He passed me about 300 yards in and I watched him pull away. I looked back again and saw that I was pretty far ahead of third place. My swim split for this race ended up being the slowest of the three races, but I pushed hard knowing that the overall series title was on the line. I figured Bryan and I were the two dueling it out for the series win. I wasn’t sure how far behind me he was, but once he finished, we looked at the results. He finished the third race in fourth place, but only a minute and twenty seconds behind me. 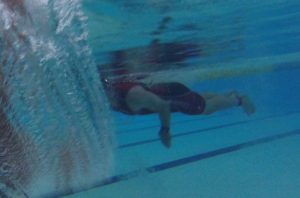 Waiting for Chase to announce the overall series results, Bryan and I were talking about how close it was. We knew that he and I had the top two spots, we just weren’t sure what the order was. I felt like we were in the Miss America pageant. The second runner up (3rd place) was announced. It was a good friend of mine, Shaun McIntosh. He finished the overall series with a combined time of 2:56:01 – just under three minutes ahead of Jeremy Becker. I honestly thought that my bike issue in the second race was going to keep me from getting the overall win, so I was surprised to hear Chase announce that the runner-up (2nd place) was Bryan Wiemers. This meant that I won the series! Bryan’s combined time was 2:49:08 and mine was 2:48:12. So less than a minute separated the two of us. 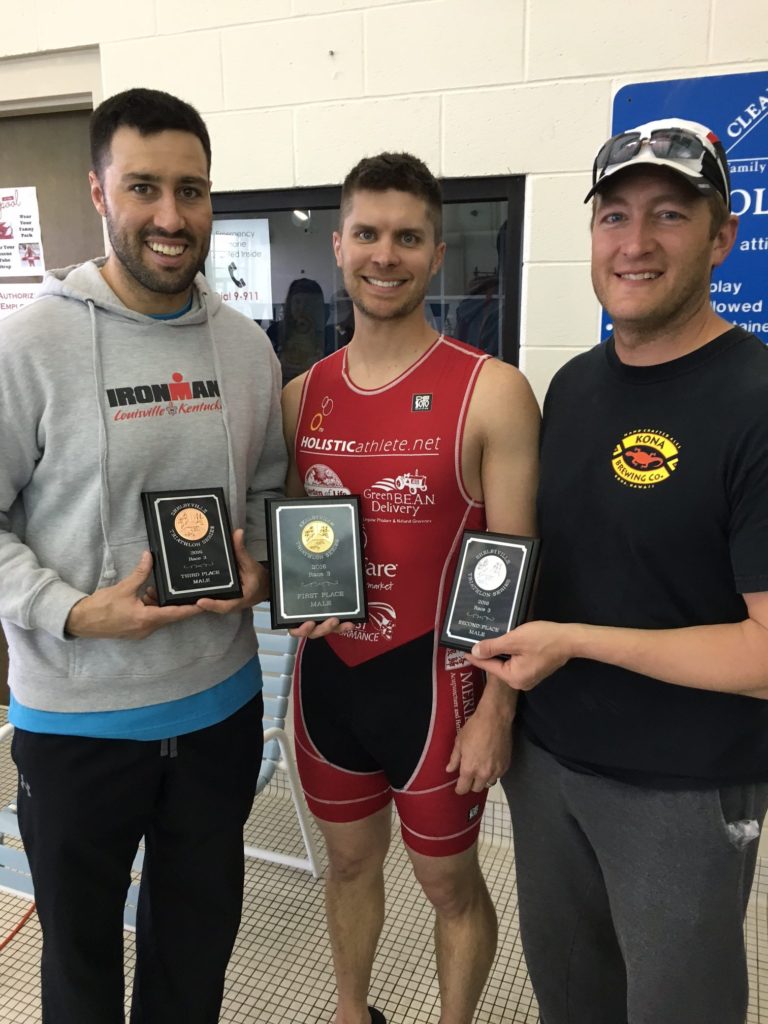 Shaun, me and Bryan with our series awards after the race.

This was a very exciting race series and the head-to-head racing of doing each race in reverse order made it even more entertaining. I hope that Headfirst Performance continues this series in the future. These are great for first time triathletes and are a very fun way to kick-off the season each year!