You know the type. That person that’s dead-set on doing something no matter what. When it comes to racing, I unfortunately fall into this category. So when I sprain my ankle pretty badly three days before the Tri Louisville race, I knew in the back of my mind that I would still try and do the race (despite what I was telling my wife at the time)!

We took a little mini-vacation up to Great Wolf Lodge in Cincinnati and I was out getting a short run in early Thursday morning before a full day of playing at the water park. I was running on an unfamiliar road without a sidewalk. It was very early and very dark. I didn’t think to bring my headlamp, and there were no street lights on this particular road. So as a car approached me, I stepped off of the road onto the grass. I didn’t see that the ground dropped off at the edge of the road. As I landed on the uneven grass with my left foot, it immediately rolled in…making a very unpleasant cracking sound! It’s been a few years since I sprain my ankle, but I knew immediately that this wasn’t one that I could just “run through”. I walked for a few minutes and then tried to start jogging back toward the lodge. It was about a mile away and I was able to move a little faster than a walk, but it was painful.

When I got back to the room, I took my shoe off and the swelling had already started. I took a quick shower and got it elevated. I was both angry and frustrated. With only two weeks left in my 2016 race schedule, why did this have to happen now?! This happens on June 27th and I could simply take a few weeks off from running and heal up…but I didn’t have that luxury. Tri Louisville Olympic distance race was three days away and the Mohican Endurance Half Ironman was just a week later!

I immediately went into recovery/ rehabilitation mode. I called my trusted Physical Therapist, Kevin at Dr. Rudy Ellis Sports Medicine. He suggested that I go up to Walgreens or Kroger and get some Kinesiology Tape and tape it up for support. At the moment, I was more concerned about not being able to walk on it that day than running in the upcoming races. We had a full day of fun planned and I wasn’t going to miss it sitting on the sidelines with my foot propped up! After breakfast, we went to “The Wal” and I found the KT Tape and an ankle wrap. Back at the room, I watched a You Tube video on how to tape a sprained ankle and I was ready to hit the waterslides! 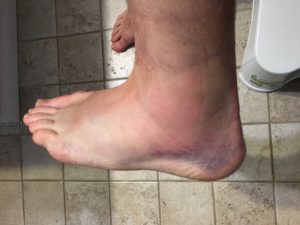 My club foot 24 hours before the race.

I was definitely limited and was limping around all day. I did some mobility exercises that night and was able to walk without much of a gimp on Friday. My ankle was still really swollen and was starting to bruise. Once we got back home on Saturday, I went into full-on race-prep mode and was doing everything I could to get myself to a point where I could at least TRY and run 6.2 miles the next day. I drank my Chinese Herbs from Meridian that contain many natural anti-inflammatory and joint healing herbs. I put on my compression sock (yes, just one) and rubbed Frankincense essential oil on my foot and ankle to help reduce the swelling. I even put heat on it instead of ice. Yes, you read that correctly – heat is best for promoting healing, NOT ice. Want to know more about that – read this. Still, I knew that I was going to need something more drastic to get my ankle well enough to race the next day.

So I made a trip out to the clinic to have Kevin work his magic. After a quick assessment and some reminiscing of previous ankle sprains we had both suffered, he began to tell me about a technique that he learned about that isn’t used much here in the US, but has great results. It’s called the Mulligan Concept. As he described it, I became excited about the possibility of actually being able to race the next morning. The Mulligan Concept is a manual therapy approach that can assist in improving movement restrictions, pain with movement, and functional restrictions. It was exactly what I needed! This is one of reasons that I’m so thankful for my partnership with Kevin and Rudy Ellis Sports Medicine Center. Kevin is always exploring new techniques and isn’t afraid to get “hands on” with patients to help them to recover.

And it worked! Immediately after a few rounds of the Mulligan therapy, I was able to jog across the clinic floor with very little change in my gait and no pain. After a tape up with RockTape for some added stability, I was good to go. 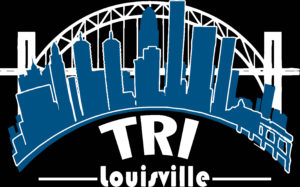 I won’t spend much time on the race report itself, as the real story is that I was able to do it at all. I still didn’t (and don’t) have full plantar flexion (ability to point my toes), so my swim was pretty slow. Having a foot dragging behind you slows you down more than you would think. Next time you are in the pool, try to swim without one of your feet straight! I also swan 1712 meters (course was 1500 meters) according to my Garmin. I see where I didn’t take a straight path from the last turn to the swim exit…so that added some time as well. 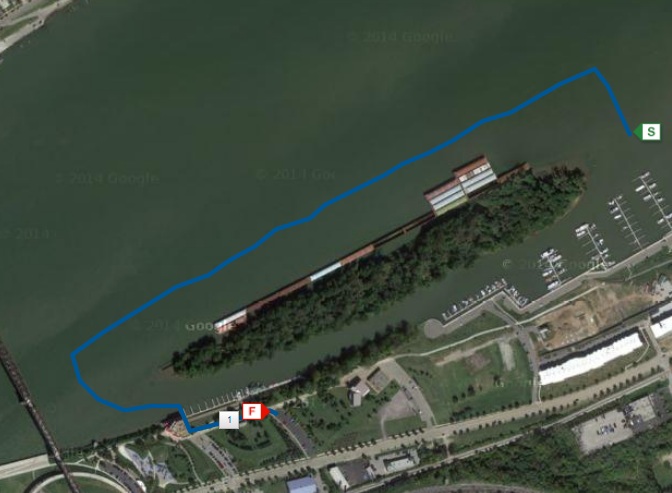 I swam with a compression sock on, so I didn’t have to put it on in transition. T1 was pretty fast after I got my wetsuit off. All I had to do was grab my bike and helmet and head out.

I planned to push it pretty hard on the bike as I wasn’t sure how far I would get in the run before the pain would force me to stop. After shoving my swollen foot into my bike shoe, I was able to get up to speed quickly. The bike was four loops on closed roads. It was a very flat course with only one very small climb. My age group was in the water first, so the first two loops weren’t that crowded. That all changed when I started lap three. The course became congested at a few different spots. I had to hit my brakes and ride behind a pack of people a few times when they were two or three wide and there was just not room to go around them.

I manged a pretty good time and felt good coming into T2.

I normally fly though transitions in Sprint or Olympic distance races, but I wanted to take my time on this one. I sat down and carefully slid my shoe on. I stood up and took a few seconds to make sure everything felt good. I grabbed my race belt and hat and headed out.

The run was the big unknown. I happened to come out of T2 with my good friend Jeremy Becker. He and I had done several races together in the past and even a few running only races. I ran with him for about the first mile and things felt ok. I could feel a little tenderness in my ankle as I ran, but it wasn’t too painful. After that first mile, it became a little harder to push the pace. When I tried to lengthen my stride, I found it painful to push off with my toe. So I had to stick with short strides and a high cadence. Jeremy pulled away and I continued to get passed by people the rest of the way. I decided after one of the two loops that I would be able to finish the run. I knew that my run time wouldn’t be good, but I’ve never DNF’d (Did Not Finish) a race, and I didn’t think that keeping that streak alive would cause any lasting damage to my ankle. 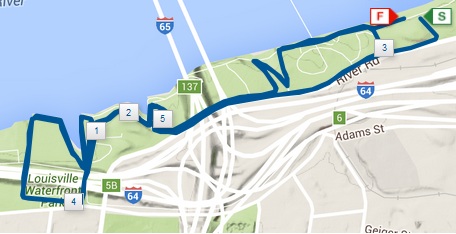 I can’t imagine a course with more turns (I count 27 turns per loop!). I also did not enjoy running up and down steps multiple times on a sprained ankle!

I’m still amazed that I was able to run the race considering I couldn’t put weight on my foot without pain just 72 hours before. Having a good PT is critical to any athlete, especially for us Type-A athletes that don’t like to use the word “can’t”!