I’ve always had good teeth. I religiously brush twice a day and floss daily. I’ve done this since I was in middle school (before that, it was on my parents). Unlike other members of my family, my teeth came in straight and I was never the kid with braces or a retainer. I’m thankful for this. I was a big enough dork as it was, I didn’t need any additional ammo for the cool kids! Due to my oral hygiene and diet, I’ve only had one cavity in my 38 years. That cavity was filled when I was in high school…which was over 20 years ago. I can’t believe I just typed that last sentence!

The cavity was on the Occlusal surface of my Maxillary first molar. Which is #3 or the first molar on the upper back right.  Like how I threw out those Dental terms there? Yeah, I know now to use Google. 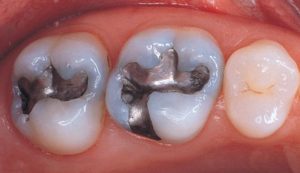 Not my tooth – but this is what a amalgam filling looks like.

When this cavity was filled back in the day, my dentist used an amalgam filling. Amalgam fillings have been used for more than one hundred years to repair cavity damaged teeth of literally millions of people. Amalgam is composed of liquid mercury (about 50% by weight), and powdered alloy metals; silver, tin, and copper. This filling material appears silver in color. I’d had this filling for so long, that I actually forgot it was there. Since it was in my top teeth, I couldn’t see it when I brushed. Out of sight, out of mind!

So when I heard the dangers of heavy metal poisoning while listing to a podcast a few months ago, I started thinking about my exposure to metals. One that immediately jumped out at me was this little pocket of mercury that had been sitting in my mouth for over 20 years.

According to numerous scientific studies, including those from the International Academy of Oral Medicine and Toxicology (IAOMT), fillings release a toxic mercury vapor that finds its way into vital organs throughout your body. I couldn’t find one piece of evidence to the contrary. If the exposure was just a few days, it would not be significant, but we are talking years – lots of years – for most people that have these fillings.

These mercury vapors readily pass through cell membranes, across your blood-brain barrier, and into your central nervous system, where they could cause psychological, neurological, and immunological problems. The poisonous vapors are odorless, colorless, and tasteless – so you won’t be able to tell that they’re there.  Mercury is an incredibly potent neuro toxin; it doesn’t take much to cause serious damage because it’s an absolute poison. If you were to take the amount of mercury in a typical thermometer and put it in a small lake, that lake would be closed down due to environmental hazards. Yet, what’s put in your mouth in the form of a filling is a larger amount. 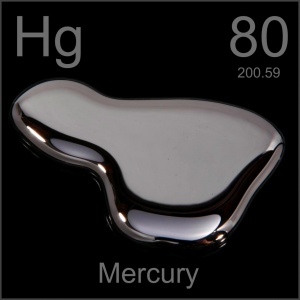 The amount of mercury vapors released depends on how much stimulation the filling sees. So every time you chew food, or chewing gum (which I’ve done a LOT of over the years), have your teeth cleaned, grid your teeth or even brush your teeth, you are releasing these vapors. Heat can also cause a release of these toxic vapors. So every time you drink hot coffee or tea you are increasing the release of these vapors.

I tend to look at European countries as being more concerned about the health of their citizens than the FDA does for us here in America.  So I was not surprised to learn that in 2011, the Council of Europe called for restrictions and prohibitions of mercury fillings, which were already banned in Norway, Sweden, and Denmark. Health Canada also stopped endorsing amalgam for use in children, pregnant women, and people with impaired kidney function, all the way back in 1996. I went to the FDA website and it states “FDA has reviewed the best available scientific evidence to determine whether the low levels of mercury vapor associated with dental amalgam fillings are a cause for concern. Based on this evidence, FDA considers dental amalgam fillings safe for adults and children ages 6 and above.” So what is the scientific evidence?

Mercury exposure, both in one large dose and through low level exposure over time, is linked through scientific data to kidney, brain, urological, fertility, neurological, and renal problems.

Once I was given all of this information, I made the decision to have my amalgam filling removed. While I have experienced numbness in my hands and feet and bleeding gums over the years, I cannot directly attribute these symptoms to the filling. Regardless, I asked my dentist to numb me up and drill out the mercury – removing every spec of it from my mouth forever! 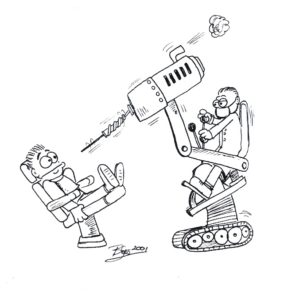 While its use is decreasing, mercury fillings are still placed in over one billion teeth worldwide per year. The good news is that there are other options. The most common is a composite. The dentist that I had remove my mercury filling replaced it with a composite resin that is a tooth-colored mixture filled with glass (silicon dioxide).

It’s been a few weeks since I was in the chair and while I can’t say that I feel any different, it’s just a good feeling to know that I no longer have a poisonous metal in my body that was slowly leaking vapors into my organs on a daily basis.

If you have mercury fillings and are concerned about the potential exposure, talk to your dentist about the pros and cons of having them removed.